Strange spiral light in the sky? 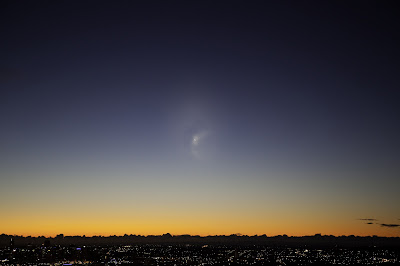 The ABC is reporting UFO sightings last night across NSW, Queensland and the ACT.

We had our own report emailed in as well:

Anyone else see a white spiral moving across the sky about 6am this morning?

What was it? It looked a bit like this

but with not as many spirals (and no blue light).

Anyone else see it? If you got a picture email images@the-riotact.com

UPDATE: A bloke called Destin Sparks has found this story and emailed in the above image with the following note:

I was on top of Mt Coot Tha, Brisbane waiting for sunrise when this was spotted, I wasn’t quick enough to get any photos of it approaching when it was nice and sharp, however I managed to take a couple of photos as it was disappearing into the distance.

More images below the fold. 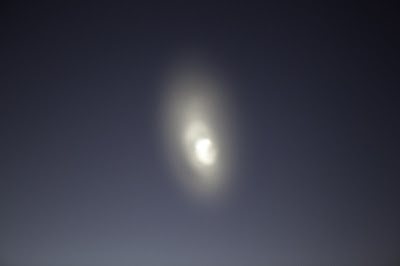 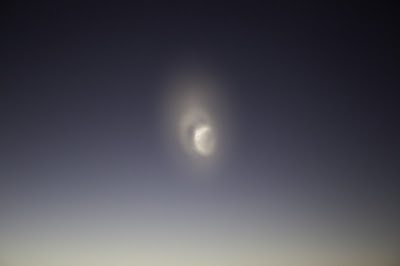 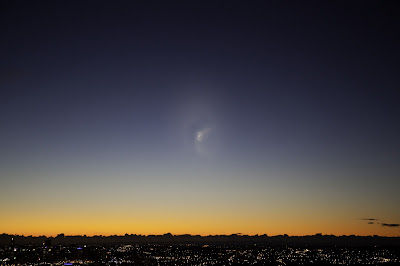 33 Responses to Strange spiral light in the sky?
Filter
Showing only Website comments

The spiral light seen across eastern Australia in the early morning of 5 June 2010 (over Queensland, Brisbane, Sydney and Canberra) has been confirmed by Benjamin Creme’s Master to be the ‘star’ which heralds the emergence of Maitreya, the World Teacher, into full public recognition.

Spiral UFO in Australia is the ‘star’. Scientists are attempting to explain away this latest spiral phenomenon as the effects of the launch of a private space rocket at Cape Canaveral, USA, just as the Norwegian spiral ‘star’ was explained away as being a failed Russian rocket.

Witnesses and many other commentators have pointed out that this spiral light is reminiscent of the spiral formation which appeared over Norway in December 2009 and which was confirmed by Benjamin Creme’s Master to have been the ‘star’ heralding Maitreya’s emergence. At the time, Benjamin Creme’s Master also noted that many more such spectacular celestial signs could be expected.

The ‘UFO’ spiraling is clearly visible about 8 minutes into this video of the SpaceX launch.

And here is the actual flight path over Eastern Australia for the first orbit, along with times and where it was visible on that path.

You can also use the link to find out when it will be visible again, although it won’t be as spectacular.

This pretty much clears it up as the test launch, with the flighpath right over this area, at the right time.

Seems to have almost certainly been the second stage of the SpaceX Falcon 9.

That’s what they want you to think.

This is an amazing photo! Do not doubt, fellow sceptics, that this is in fact the very first recorded image of a Reiki shower. For aeons, practitioners of the one true healing faith have puzzled over the source of their healing energy. Despite its seeming abundance it has been known for some time that the stocks of Reiki Healing Energy (RHE tm) were being run down as more and more practitioners found the ease at which the energy could be accessed and applied to ailing souls across the land.

Now the mystery has been solved. Featherbright Morningdew of the Reiki Management Institute (RMI tm) has studied the images from this very site and has calculated that Australian Reiki Practitioners (ARP tm) have at least ten more years of RHE thanks to this interstellar gift. To make the most of this fantastic luck the Majors Creek Institute of ARP is offering double the normal dose of RHE at each consultation until the end of June. Don’t Delay, Book Now! But wait, there’s more! From the 1st of July we will be offering online Reiki healing! No need to leave home, with our patented Reiki Stream Access Technology (RSAT tm) developed in close cooperation with our friends and the Church of Scientology, you can log on and access Reiki healing from the comfort of your own lounge room (or bedroom if you’re really crook but have an internet connection available). Why travel when you can Dabble? ™. For more details of our fantastic healing opportunities call 1800 REIKI HAHAHA now for your personally emailed glossy brochure.

Well if that was the test firing of the rocket by the mob wanting to get NASA launch contracts, I’d say they are a long way off winning businesses…

Personally I reckon it must have been Project Bluebird.

I think I can see God’s face in that cloud, or maybe a baby holding on to a can of Fanta?

The end times are coming……….

Seems to have almost certainly been the second stage of the SpaceX Falcon 9.

This site shows how the one in Norwegian sky happened last year, they said it was a rocket also. http://www.wired.com/wiredscience/2009/12/norway-spiral-in-the-sky/

Get with the times dude. Maybe the Isrealis? 🙂

And only a few days after the Westall story. Uncanny.

The spirit of Mully still watches over us!

There’s bound to be extraterrestrial intelligence out there somewhere (because there’s bugger all down here)lol, but please don’t let it be Mully!!