Super Best Friends present Round and Round. Local music video

Super Best Friends John Barrington have made astonishing use of their Parliament House access to produce a new bar setter in local music videos.

It has duly been added to the Canberra Music Playlist as number 101: 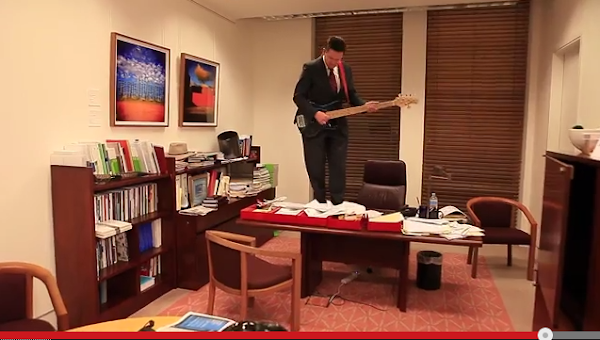 Tags local music video round and round Super best friends

David Ironside - 30 minutes ago
Tracey Ironside yes there a few around Fadden recently View
Sandy Gibbs - 36 minutes ago
Kathy Little Suzy Obsivac these are the ones we saw on our walk today. Timely article!... View
Joanne Boyanton - 50 minutes ago
Had some in our back yard View
Property 39

Margaret Welsh - 55 minutes ago
Yes, and I'm not a Liberal voter these days. I hate the number of apartments. When we downsize we'll be moving out of the ACT... View
watto23 - 4 hours ago
So why can't the liberals provide a solution to this problem. They are very good at pointing out everything Labor does wrong,... View
Opinion 1

facebook_user - 2 hours ago
Excellent article Hon Deepak-Raj Gupta. You are spot on regarding the Pandemic COVID19 and themself reliance required by Canb... View
Opinion 1

Jeremy Calero - 5 hours ago
Kaitlyn nothing will stop it lol View
O L - 6 hours ago
Wonder what that means for rental longer term? Probably go up after covid to match increase in housing values View
Rodney Weber - 9 hours ago
Shiva Sapkota A lot of the older areas also have many poor quality houses. Cheap materials :-( View
Community 12

O L - 6 hours ago
Great, that means little to no federal funding coming our way View
Annie Mills - 6 hours ago
Ben Winkler I have a sneaking suspicion that people in the bushfire affected areas are so desperate for the help they have be... View
Craig Griffiths - 8 hours ago
I've become convinced over the years that tabloid media have a psychological code in the messages they put out during electio... View
Property 10