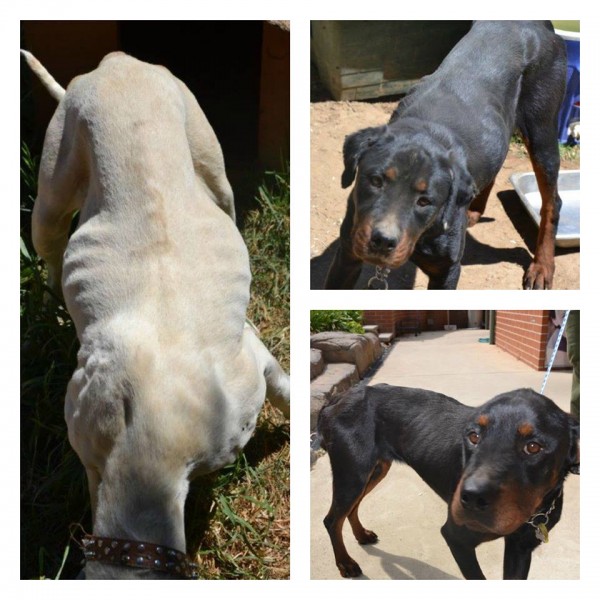 The 29-year-old woman was convicted and sentenced for failing to provide adequate care to three dogs and a rabbit.

A 29 year old local Canberra woman, Stacey Hawks has been convicted and sentenced under the Animal Welfare Act (1992) for failing to provide adequate food and water for three dogs and a rabbit under her care.

On closer inspection the animals were found in an extremely poor state. The three dogs were not provided with suitable water and were found to have a number of insect bites on their ears. The dogs were also very skinny, with their ribs, spine and pelvis clearly visible. The animals were seized by RSPCA ACT Inspectors.

The animals were examined by an RSPCA ACT Veterinarian. All three dogs were found to be in extremely poor condition as a result of starvation. In the days following, staff at RSPCA ACT had noticed one of the animals had items of clothing and material in its faecal matter.

On 21 November 2014, RSPCA ACT Inspectors returned to the scene to investigate inside the premises where a number of animals were found in poor condition. Inspectors found four adult cats, three kittens, an eight week old Jack Russell pup, a blue tongue lizard and a rabbit. The kittens, lizard and rabbit were surrendered to RSPCA ACT with arrangements made for the cats to visit the RSPCA ACT veterinary clinic.

On further inspection, the rabbit was found to be extremely underweight, living in a cage full of urine soaked sawdust and faeces with matted fur around its feet, perineal region, back legs and tail. The rabbit’s feet and tail were also heavily stained with a liquid that had the odour of urine and its nails were overgrown.

Magistrate Boss was strong in the assessment of the sentence, “I impose penalties upon you to deter you from ever engaging in this conduct again and also to deter others. However, if conduct such as this is permitted to continue in the community, there will come a point at which people won’t be permitted to have animals. That would be of considerable concern to everybody in the community.”

Stacey Hawks was sentenced by Magistrate Boss in the ACT Magistrates Court. The defendant pleaded guilty and was sentenced to one month imprisonment which has been suspended upon the defendant entering into 12 month good behaviour bond, $355 fine and a five year ban on purchasing, acquiring, take possession or custody of any animal.

Ms Hawks was also ordered to relinquish custody of all animals currently in her care. Multiple animals have since been surrendered to RSPCA ACT.

Senior Inspector Catherine Croatto welcomed the sentence for this case, “The severity of this case warrants the penalty imposed. It is encouraging to see that in this case the punishment fits the crime, and it is important to remember that animal cruelty is indeed a crime.”

RSPCA ACT CEO Tammy Ven Dange echoed the feeling, “We are pleased to see for the first time that a magistrate has handed down a reasonable punishment for an act of cruelty against an animal. We really hope that this is the new direction that all Magistrates are heading towards – that is ensuring that the punishment fits the crime.”

RSPCA ACT recently launched a petition calling for harsher penalties for crimes involving animal cruelty. So far over 8,400 individuals have signed the petition.

Tammy Ven Dange, “While we don’t know yet if this is a one off decision or if we are going to have similar outcomes in the future, we believe that the greater Canberra community has made a difference in voicing their concern in the inadequate sentencing for previous animal cruelty cases.”

@The_RiotACT @The_RiotACT
The ALP's been in charge for almost 20 years but health has remained a constant sore point for successive Labor governments. Why? https://t.co/aGuaozRh3c (31 minutes ago)