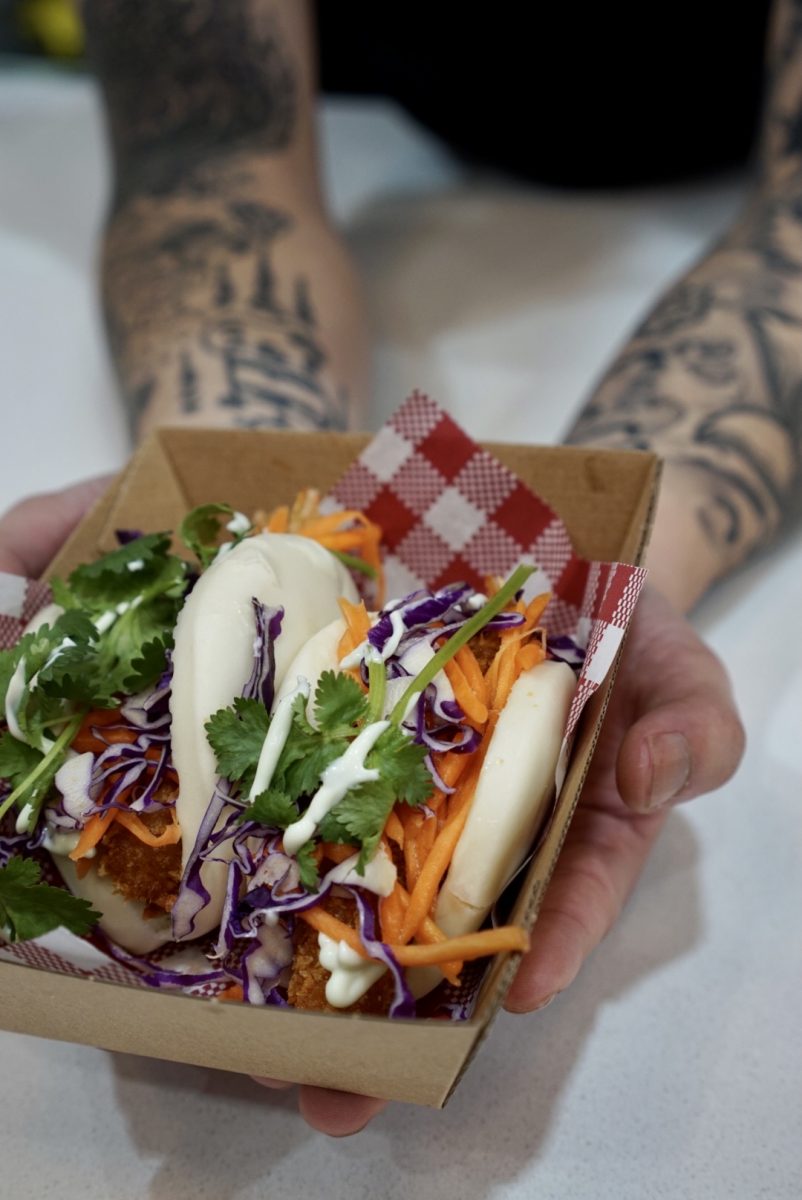 Australians long ago cottoned on to the joys of Asian street food, and our multicultural make-up means we’ve got the best of everything right on our doorstep. Here are three Canberra street food stars, doing their thing with flair.

Luke Leung swore he wouldn’t go into the restaurant business, but with three generations of his family plying their trade in commercial kitchens, resistance was futile. With Hong Kong-born parents, Chinese cooking came naturally, but Luke’s wanderlust exposed him to such a diversity of cuisines that he found it hard to choose his favourite.

When Luke left his IT job and launched Phat Panda two years ago in Tuggeranong’s South.Point shopping centre, he wasn’t going to be bound by a single cuisine when it came to street food. 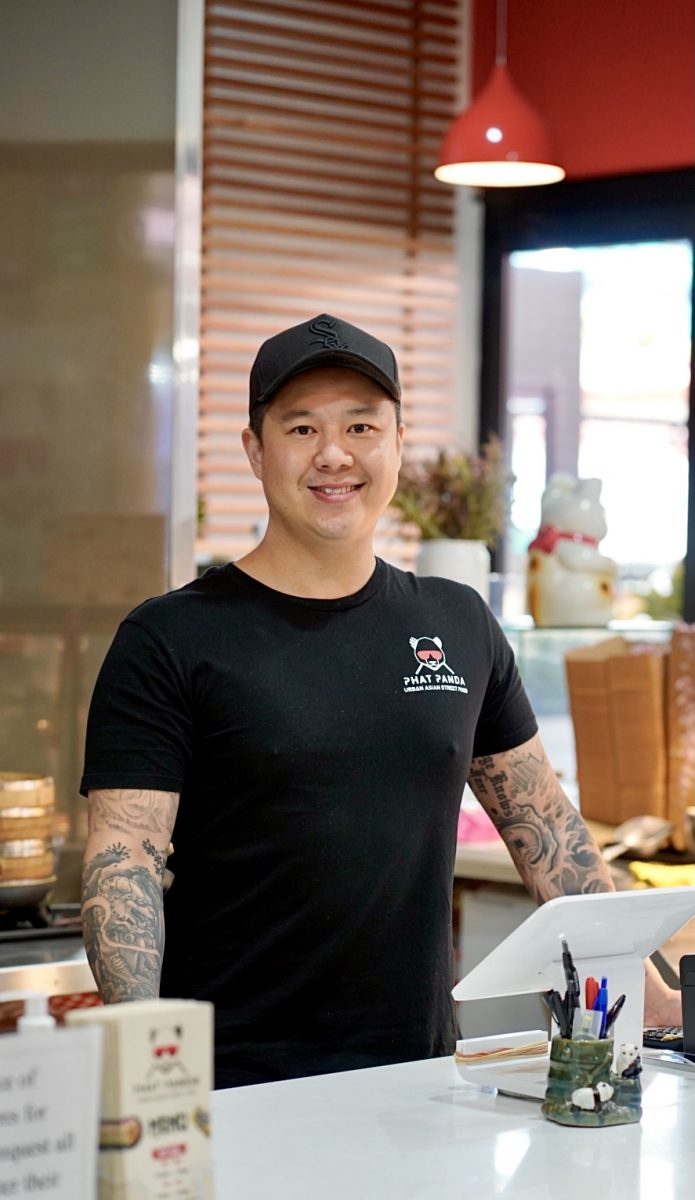 Luke Leung draws on his travels and heritage to inform the Phat Panda menu. Photo: Supplied.

His menu runs the gamut of Vietnamese Pork Rolls, Malaysian laksa soup, Vietnamese pho, and Japanese-inspired karaage chicken. In a nod to Luke’s heritage, there are Chinese staples including won ton noodle soup, bao, and snacks including wonton chips and spring rolls.

I’m curious about a range of dishes called ‘Naughty Paws’. In short, your choice of fried chips or wonton chips, with your selection of topping. We dive into some crispy wontons topped with marinated beef with sweet chilli, tangy mayo and shallots, as well as potato chips topped with fried chicken, hoisin sauce, spicy mayo and seaweed sprinkles. Both are great, but the combination of crisp wonton chips and tender, sweet pork is the winner.

Of the baos, soft folded buns which envelope pickled carrot, purple cabbage and coriander, the barbecue pork and the prawn tempura are our picks of the bunch (there’s also fried tofu, fried chicken and marinated beef versions). 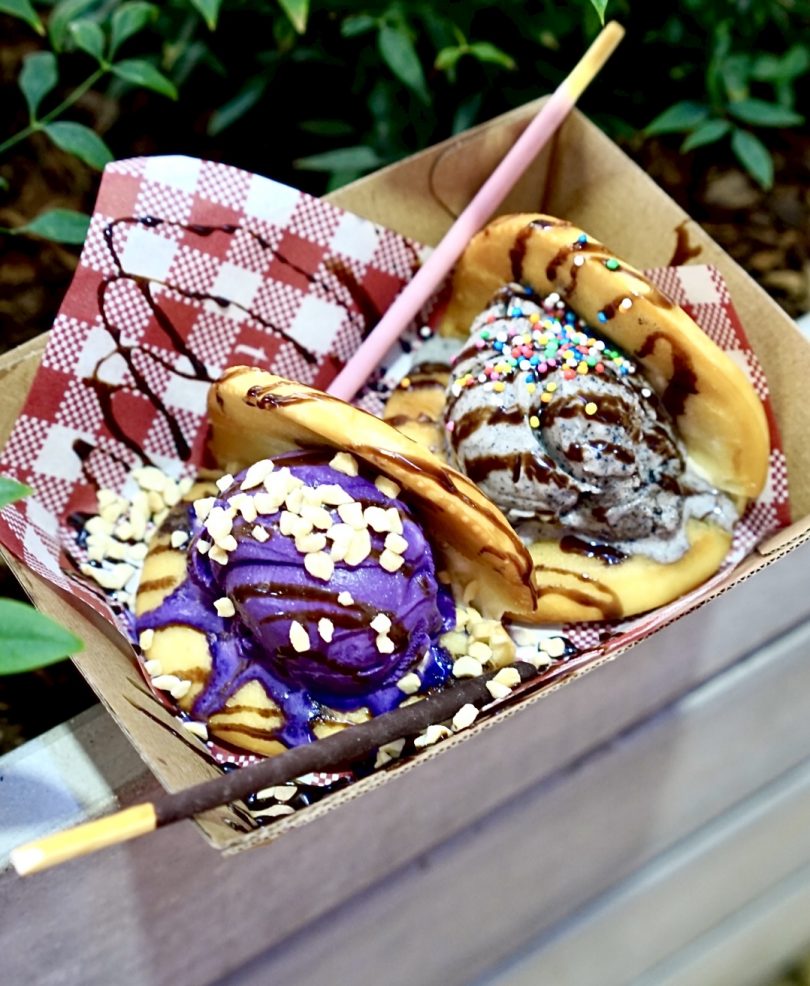 While ordering we meet Luke’s parents, who’ve been helping out in the Phat Panda kitchen. They’ve been working their magic on the master stocks used in all the soups. The pho stock is simmered for 10 hours and of all the things I try during my visit, the traditional Chinese wonton noodle soup is the standout dish, with its deep and delicious stock and silken, homemade wontons. I’d make a trip back to Phat Panda for that soup alone.

I’d also break land-speed records for another serve of the Phreaky Phat Bao, comprising two scoops of gelato (mango and pineapple, and taro) in a fried bao bun.

Phat, or more accurately, fat, means good fortune in Cantonese. And good fortune was shining on Tuggeranong locals when Luke Leung decided to throw in the IT towel and combine the best of old and new in this cool little eatery. More: Phat Panda.

The sticker on the white laminate tabletop in Westfield Belconnen reads, “I can eat cake because it’s somebody’s birthday somewhere”, and I’m certainly not one to be a stick in the mud about stuff like that.

Without delay, I order two egg bubble waffles – one chocolate, the other matcha flavour, topped with ice cream and drizzled in chocolate sauce. The theory is that I’ll be eating one, my husband the other, but he knows how this is going down. He orders himself a savoury crepe so he doesn’t leave hungry. 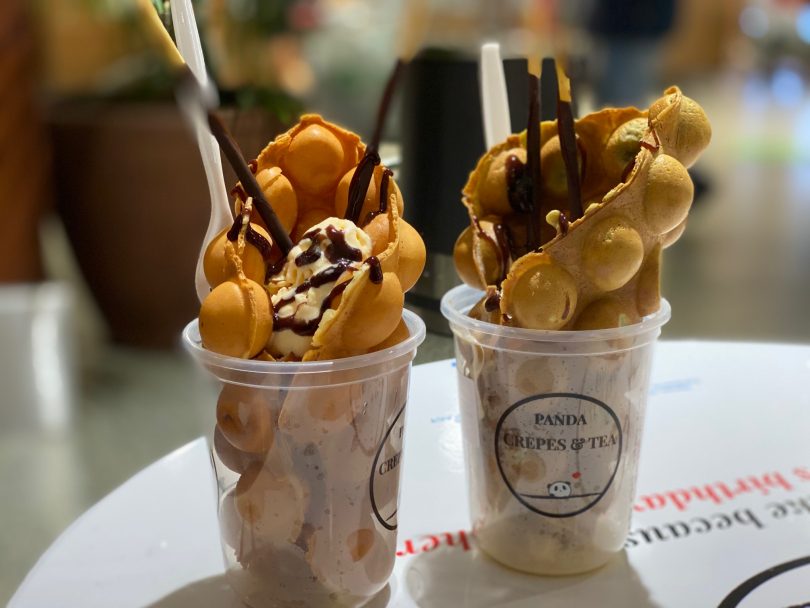 They’re not the easiest to eat, but the bubble waffles at Panda Crepes & Tea are good. Photo: Michelle Rowe.

Panda Crepes & Tea, opposite Woolworths in this expansive shopping mall, dishes up a steady line of delicious savoury crepes, or jianbing as the traditional Chinese street food is known, as well as bubble tea in every conceivable flavour.

But I’m here for the sweets, and am carefully considering how to tackle the bubble waffle without ending up looking like a three-year-old given free rein of a chocolate mud cake.

The waffle has been jammed into a plastic cup, filled with ice cream and drizzled with topping. Seeing no easy way to tuck in, I pull it apart, using each bubble as a mini scoop for the ice cream. It’s tasty, if a little frustrating to eat, but it’s not a patch on the sweets I buy to take home for later. 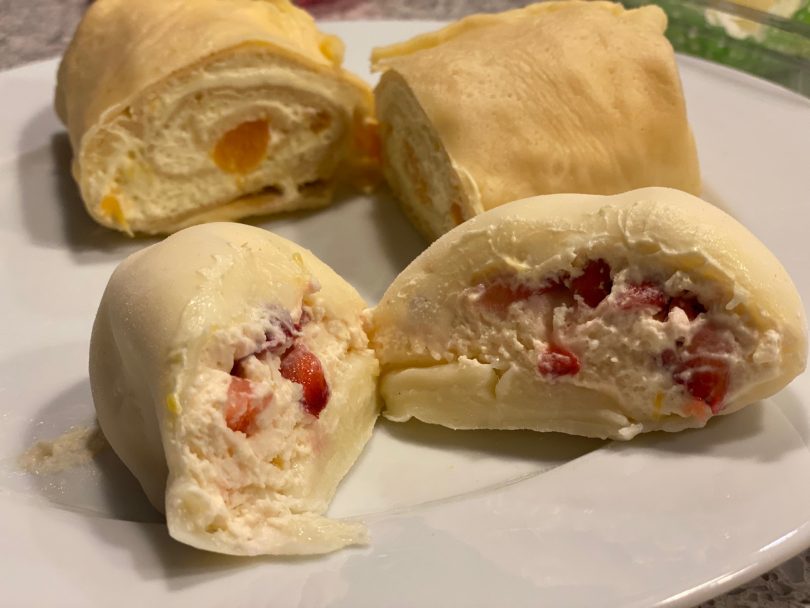 The mochi balls and towel rolls at Panda Crepes & Tea are filled with a delicious mix of cream and strawberries, and mango. Photo: Michelle Rowe.

Panda’s mango-flavoured towel roll is a delicious concoction made by spreading a wafer-thin crepe with cream and mango and rolling it, tucking the ends in for a perfectly formed package. Kind of like a mille crepe cake, without the multitude of layers.

Two perfectly formed mochi balls are just as good. They’re glutinous rice cakes with a silky, soft, almost gelatinous texture, filled with cream and strawberries (there’s mango too if you fancy it, as well as Oreo, matcha or red bean versions).

Panda Crepes and Tea owner Lucy Wu, who launched her business a year ago, says the towel roll and mochi balls are newcomers to the menu. After three months of recipe testing, the desserts are now a welcome addition to the repertoire. 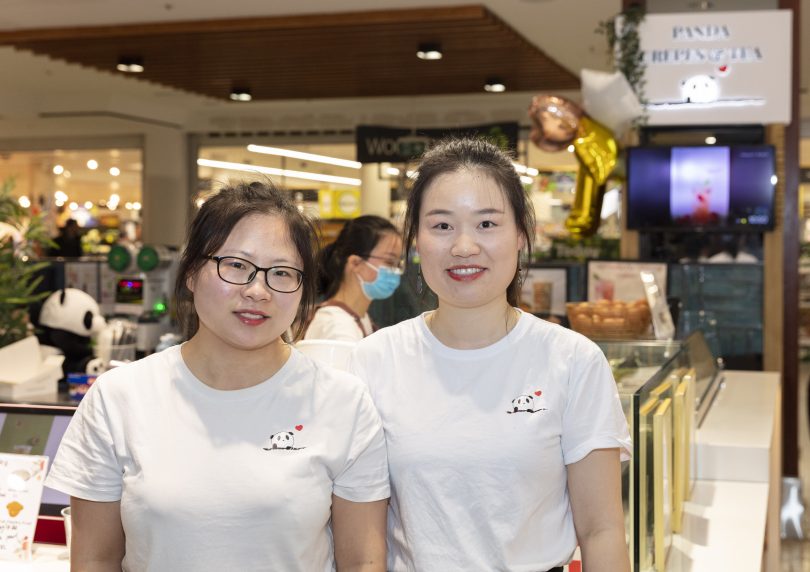 If you’re planning to push the boat out and go for a multi-course indulgence, make sure you get in quick to buy your mochi balls. “They take a long time to make,” says Lucy. “We can only make a certain quantity, so when we are sold out, we’re sold out.” And that would not be a happy birthday for anybody. More: Panda Crepes & Tea.

After four years living in Beijing, Miya Wu had become quite attached to the popular street food staple, jianbing. Doled out by food vendors as a late night or breakfast snack, these savoury crepes were the perfect meal in one – think Chinese burrito, but with a more delicate crepe exterior surrounding uniquely Asian ingredients including hoisin and chilli sauces, spring onions, coriander and black sesame seeds, with fried wonton strips giving it all a satisfying crunch. 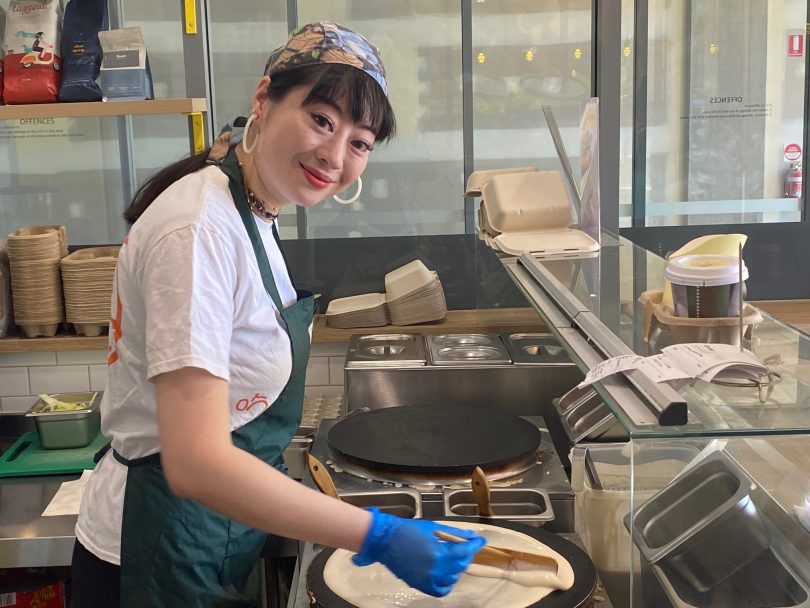 When Miya moved back to Australia, she hankered after her favourite street food and figured that if she loved jianbing, there was a good chance Canberrans would too.

In 2017, she introduced the dish at the Forage street food festival and sold out after two hours. She later set up a stall at the Old Bus Depot Markets in Kingston, where there was a similar response to her Asian pancakes.

Miya quit her job as a hotel banqueting chef and opened a tiny hole in the wall in Dickson where she could churn out jianbing to her heart’s content.

In addition to the classic flavour described above, Little Wu offers a version stuffed with Peking duck and cucumber, as well as one with pork belly, and another filled with a beef patty, cheese and lettuce – an Asian cheeseburger of sorts. 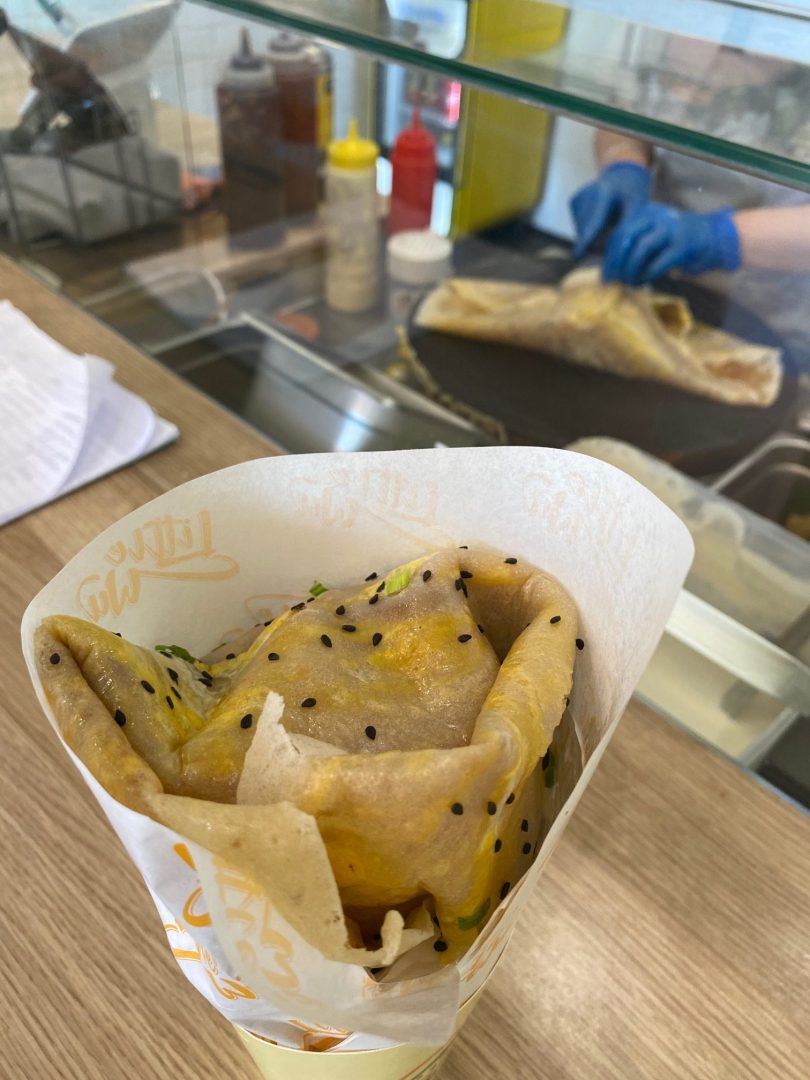 Little Wu’s delicious jianbing is made in front of you and served steaming hot in a cup. Photo: Michelle Rowe.

The Super Bing is not for the faint of heart, packed with bacon, ham sausage, pork floss and a Chinese doughnut – all the favourite Chinese snacks, says Miya.

Remembering my standoff with the bubble waffle at Panda Crepes, I’m a little alarmed that my Fried 5-Spice Chicken Jianbing comes in a cup. But Miya instructs me to simply peel back the paper wrapper enveloping the crepe and tuck in. It’s fresh off the pan (it’s made right in front of me) and utterly delicious.

In China, jianbing is usually served in a plastic bag or wrapped in foil.

“The way I serve it is not the traditional way,” Miya concedes. “I decided to serve it in a cup because I wanted to get eyes on it, for people to actually see the jianbing.”

It’s pretty clear Canberra likes what it sees – less than two years after she launched, Miya is already eyeing opportunities to open another store.

Have you been to phat panda Briana?

No I haven’t yet, might have to check it out though 😍