Taking out the rubbish involves 10,170 bins worth a year for Canberra’s biggest recycler 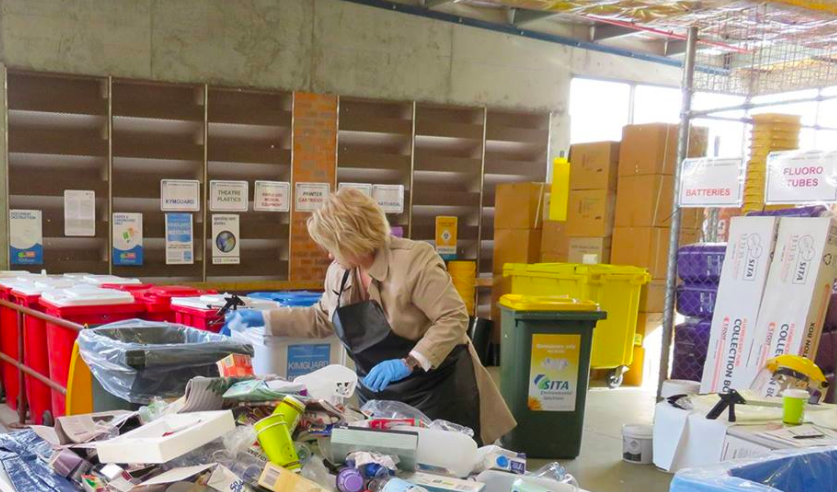 Despite all the demands of being one of Canberra’s largest hospitals, Calvary Public Hospital in Bruce managed to send a massive 153.8 tonnes of waste to recycling in the past year, earning the title of Biggest Recycler at the Actsmart Business Sustainability Awards in Canberra this morning.

This huge figure is the equivalent of 10,170 household recycling bins and gives a new twist to the idea of putting out the rubbish. The hospital has also implemented 29 waste streams as part of its sustainability initiatives.

The awards ceremony held at the Pialligo Estate this morning recognised a range of Canberra businesses for their achievements in working towards a more sustainable future.

There were 10 award categories ranging from waste minimisation to innovation and leadership, with 62 businesses nominated.

“I would like to congratulate all the award winners, businesses, organisations and local events participating in the Actsmart programs. The Actsmart awards are in their eighth year and the quality of entries and winners continues to inspire,” said Minister for Climate Change and Sustainability Shane Rattenbury.

“Actsmart programs assist organisations across the Canberra region to reduce greenhouse gas emissions through better energy and water efficiencies and waste reduction – helping the ACT Government reach the ambitious targets it has set.

“Through the Actsmart Business Recycling program over 50,000 staff are now recycling in their workplaces and diverted the equivalent of 137,000 domestic recycling bins from landfill.

Mr Rattenbury said that since 2012 the Actsmart Business Energy and Water program has helped more than 670 local small businesses to reduce their energy and water consumption, in turn saving the businesses an average of $2,500 on their annual energy bills.

“Events such as the National Multicultural Festival, Floriade and Canberra Balloon Spectacular have received assistance in setting up recycling systems that have allowed more than one million patrons the opportunity to recycle at ACT events this financial year,” he said.

Below is a photo of this morning’s 2017 award winners. 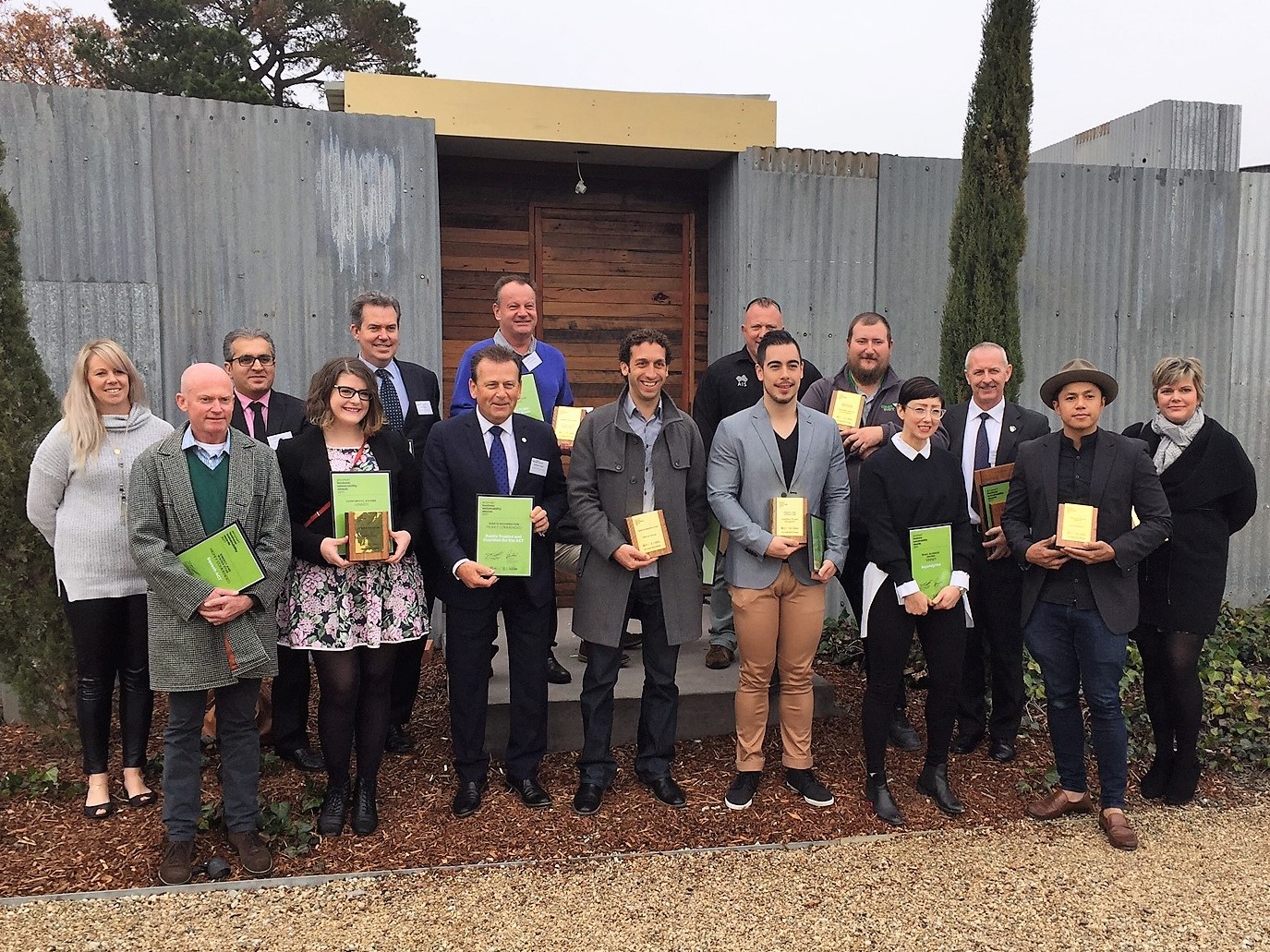 Calvary Public Hospital took out the 2017 ‘Biggest Recycler’ award, with the other award winners including:

Waste Minimisation Winner – Brema Group
This demolition and earthmoving company used to send 67 per cent of its waste to landfill but with the help of the Actsmart program has introduced initiatives for mixed recycling as well as paper, battery and organic recycling. The Brema Group now sends only three per cent of office waste to landfill and 98 per cent of waste from its demolition jobs is also recycled. The Public Trustee and Guardian for the ACT was also highly commended in this category.

Biggest Recycler for a Small Event Winner – Ted X Canberra
The Ted X Canberra event this year reduced its waste to landfill and had a 78 per cent increase in recycling. Mixed recycling and organic bins were used and there was a sustainability checklist for caterers, with leftover food donated to OzHarvest.

Biggest Recycler for a Large Event Winner – Kicks Entertainment Events ‘Spilt Milk 2016’
Kicks Entertainment set up 240 recycling bins at the front of house area of their event in Commonwealth Park and also had 1100 litre containers to maximise recycling in the back of house. They also implemented a $1 deposit scheme for drink containers to get patrons to return them for recycling and used Actsmart water refill stations to reduce the number of drink containers sent to landfill. The National Multicultural Festival’s Community Services Directorate was also highly commended in this category.

Energy and Water Star Winner – Anytime Fitness Gungahlin
This 24-hour fitness facility is working to reduce greenhouse gas emissions through the installation of 150 LED light panels. The initiative will save them around $4,928 per year in energy bills and reduce energy use by 27,000 kwh per year. Squash ACT was also highly commended in this category.

Corporate Winner – Griffin Legal
Griffin Legal joined the Actsmart business recycling program in 2013 and has reduced waste to landfill by 29 per cent even though their workforce has increased by 30 per cent. They have become a paperless office, have participated in an ANU study on workplace recycling habits, and encourage their staff to walk to meetings, ride to work and take public transport.

Motivation Excellence Winner – KPMG
KPMG staff are educated and motivated with pass/fail signs on recycling bins. They also participate in office harvest, with staff involved in bringing excess food to work for sharing.

Minister’s Award for Leadership Winner – Ollie McInerney – US Embassy Canberra
Working with the Actsmart program, Ollie McInerney has been able to reduce waste throughout the US Embassy in Canberra. The results of his efforts have included the recycling of more than 200 kilograms of household batteries, 35 tonnes of concrete waste, and 200 kilograms of toner cartridges each year. Other initiatives Mr McInerney has introduced include a public awareness program to encourage employees to turn off lights, recycling 100 tonnes of green waste every year and installing a worm farm at the Ambassador’s residence.

Below is a short video showing interviews with some of the award finalists.

One Response to Taking out the rubbish involves 10,170 bins worth a year for Canberra’s biggest recycler
Filter
Showing only Website comments

The strange thing about recycling in Canberra is that the depot does not have a bag-shredder/splitter so any recycling items inside a bin-liner or garbage bag go straight to land fill. We don’t seem to be very smart. Why not follow other jurisdictions?

Trish O'Connor - 1 hour ago
is there a phone number to call each morning to check whether the balloons will be flying. View
News 22

Martin McMaster - 1 hour ago
I'll have one of each. Here is the delivery address https://www.google.com.au/maps/place/Parliament+Dr,+Capital+Hill+ACT+2600... View
2903Tuggers - 4 hours ago
All very interesting. But Westfield - sorry, Woden - is unlikely to see light rail before 2030. So there is plenty of time to... View
Capital Retro - 5 hours ago
Most people that will be going to CIT will be from the Tuggeranong and Weston Creek areas and the tram doesn't run there. Tra... View
Food & Wine 1

buttercup - 2 hours ago
Good on you Anna. Fresh ideas, reinventing yourself and your menu as the years roll by, delightful fresh food, and awesome cu... View
Community 17

Sonya Curran - 2 hours ago
I'd love to! Have never been! View
Mandy Pittman - 3 hours ago
Absolutely love Danny's bakery, everything is so yummy especially the hot cross buns but everything tastes wonderful and the... View
Rebecca June - 7 hours ago
Jacob Hollis will feed our child for a week View
Lifestyle 1

Conan of Cooma - 3 hours ago
I was an extra for the final scene in this movie. Leah is not only a bloody hilarious person but also an incredibly intense a... View
Food & Wine 71

Connie Senkoe - 4 hours ago
any body heard of Librafg with Nick Gibson. Is it a scam too? View
Community 24

Emily Vandenberg - 5 hours ago
Luke this looks interesting View
JS9 - 7 hours ago
Yawn. It has been shown time and time again that the overwhelming majority of 'charges' bought against the ABC by in general... View
Ashley Smith - 8 hours ago
Brett Lever he is aware... View
Community 1

keek - 7 hours ago
Yeah, I'll stick to teaching my kids that the internet is a playground, and nothing said on it is to be taken seriously. This... View
Sport 34

Benita Bittner - 7 hours ago
Louise had to keep up with you lol. View
Opinion 5

cockneyreject - 8 hours ago
Fair point. I don’t trust 4 Corners or the ABC either ... they are never balanced on anything (even the episode on China la... View
show more show less
*Results are based on activity within last 7 days

A 46-year-old Campbell woman has been charged with 23 fraud offences following the execution of a search warrant by ACT Policing this...
Community 24

A documentary made by a Batemans Bay filmmaker about keeping Australia's oldest show on the road is one of five...
Motoring 0

@The_RiotACT @The_RiotACT
The developer of the problem-plagued Gungahlin pool has been absolved of liability for building defects as the government tries to secure a builder to rectify and reopen the facility as soon as possible https://t.co/8AO1kUihK8 (1 hour ago)

@The_RiotACT @The_RiotACT
Feel like you missed out on summer? Well, the @BOM_ACT's Autumn Outlook says there's no chance of a late burst of heat, with cool, wet conditions to continue https://t.co/FhKIkUIp7X (2 hours ago)

@The_RiotACT @The_RiotACT
Pet owners say they haven't been able to visit their pets' graves after the property on which they're buried was sold in December 2020, and the new owner says allegations about disturbing the graves are unfounded https://t.co/xfTqQPkHyw (2 hours ago)