That first step on the moon was our’s damnit! 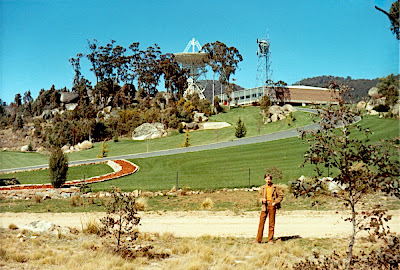 With all the hoopla surrounding the 40th anniversary of the first landing on the moon (a feat we’re unable to replicate today) the Courier Mail has a definitive piece explaining how the ACT’s Honeysuckle Creek was the real hero of those iconic images, and not Parkes which stole the glory in “The Dish“, and from thence into popular culture.

After years of confusion and controversy over whose pictures were used when, most now agree Honeysuckle Creek relayed the pictures of Armstrong’s historic first step.

Houston then switched to Parkes for all but the first eight minutes or so of the two-and-a-half-hour broadcast.

The reason? Armstrong caught everyone on the hop by deciding to venture out ahead of schedule.

The astronauts were supposed to sleep for six hours, but who could sleep? They had just landed on the moon.

Parkes was set up to be the main Australian station, but the moon had not quite risen there yet.

Sure, they did two hours and twenty odd minutes of astronauts goofing around on the lunar surface, but who gives a toss about that compared to the one small step?

49 Responses to That first step on the moon was our’s damnit!
Filter
Showing only Website comments

Bit of credit given to Honeysuckle Creek on Lateline just now.

on the moon that is

Gentleman! You can’t fight in here, this is the war room!

God what a pathetic excuse for a movie. An hour or so of my life I’ll never get back…

But I was worried JB might tell me off again

Sorry John, I’ll check for links in future. But I do distrust the Courier Mail since Comrade Bligh started the flouridation of Brisbane’s water supply

Pardon my ignorance, but can someone explain the Parkes and Honeysuckle Creek roles? I thought Parkes carried the tv footage but Honeysuckle handled the actual mission control stuff.

Or, y’know, read the article linked to in the post?

bingo berra, suggest anna watches the re-run of stateline, on abc (is it midday today?) which had an excellent piece on the matter last night – bet those chaps involved still pinch themselves to think ‘that was me!’

[an ex-ms astro’s father was the doctor at military parkes monitoring the astronauts; but wasn’t lampooned at all in ‘the dish’ and was most peeved ; ) ]

My understanding (more than happy to be corrected) is that Parkes was meant to do the transmission but due to Armstrong’s keen-ness to get down that ladder (who could blame him) Parkes weren’t ready with the link so our guys (yes, our guys!) at Honesuckle just sucked it up and did the job! When Parkes finally got their act into gear (some 8 minutes late) responsibility for the transmission was passed to them.

Pardon my ignorance, but can someone explain the Parkes and Honeysuckle Creek roles? I thought Parkes carried the tv footage but Honeysuckle handled the actual mission control stuff.

50km south from Tuggeranong, on Apollo Road – off Naas road is it ?

It’s not that far away, only on small step for (a) man really. It’s not like it’s on the moon or anything!

I can’t say I saw the moon landing (I was only 1) but I’m so very I’m glad I can tell my kids it happened in my lifetime. I was explaining to my son only this morning that out of all mankind that ever lived, only 12 people have ever been to the moon. Amazing, truly amazing.

Maybe its because it’s Friday, or maybe it because I’m tired, but I will never cease to be both amazed and proud that 1) we’ve been to the moon! and 2) that those few minutes of amazing grainy, black and white footage – seen around the world – was relayed around the world FROM THE MOON by this beautiful city. Parkes be damned.

My dad had a friend who worked in the Deakin phone exchange (at least that’s what they *called* it 😉 )
He was able to sit with him and listen in on the transmissions between our bases and NASA.

I have PMG (Telstra)technical circuit diagrams and documents/operational journals of the NASCOM system which PMG managed on behalf of NASA, most equipment then housed on a floor at the ‘old’ Deakin exchange. (PMG provided the links and equipment for NASA) PMG played a major part in getting the images from Honeysuckle to the USA. These journals were written in 1969 and show exactly how the signals were derived and split to various endpoints. Signal was sent via radio from Honeysuckle to Williamsdale through to Red Hill, (when the radio masts were still inplace)down to Deakin exchange, then through the PMG terrestrial network to the OTC exchange in Sydney. A split was made at OTC for the benefit of Australian viewers. The signal was then sent via Hawai to the US. Puts any end to debate on who sent the first signals, go Honeysuckle!

In 1986 I was on a project where we had to re-commission the then ‘Telecom’ telco links and equipment through to Honeysuckle for comms for Army manouveres. At this stage the buildings had been vacant for a couple of years but were still in good condition and the generators were still working. Booners had not valdalised them yet.

Thanks for the links. Looks like a great 4WD day tripping around all those old tracks. Maybe even a big loop through there then back up via Mt Franklin to home (after a snowfall…).

Nice idea but it’s “wilderness” so you cant even mountain bike, let alone drive from Franklin to Orroral. Pity as it is one of the best ACT rides…

Unfortunately, Vandals have zero appreciation for the historical significance of buildings like this, and Orroral Valley.

Such a waste to ruin something of such high sceintific significance…But then vandals only care for the hear and now sound of things breaking.

Thanks for the links. Looks like a great 4WD day tripping around all those old tracks. Maybe even a big loop through there then back up via Mt Franklin to home (after a snowfall…).
Where can you buy topo maps in Canberra?

Dolores Bicket - 19 minutes ago
Where can we drop off the blue milk lids? View
ACT Election 108

@The_RiotACT @The_RiotACT
Big changes are in store for a key Woden corner with Zapari unveiling its plans for $400m mixed-use development https://t.co/nVKfiBzBed (29 minutes ago)