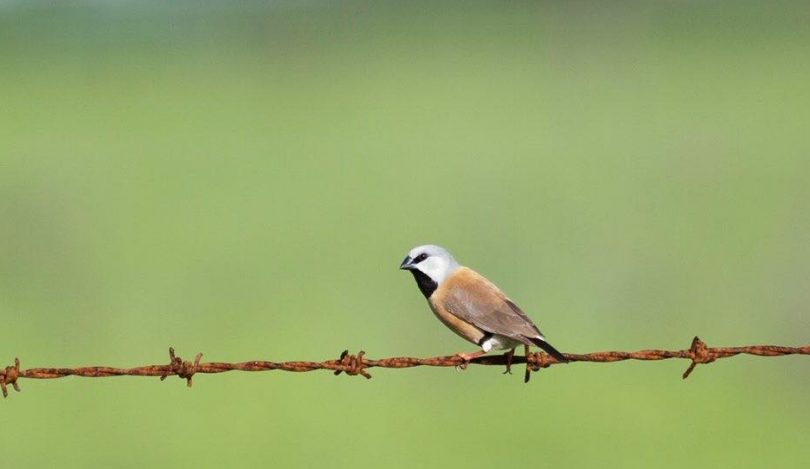 Critics of Adani’s coal mine plan say that the plan to limit the impact on the black-throated finch will not save the endangered bird. Photo: Facebook.

A small, rust-coloured bird with a distinctive black throat has come to represent the battle between environmental groups, the concerned public, and a controversial coal mine, proposed by the Indian-owned Adani Group, in the Galilee Basin in Central Queensland.

“The Black-Throated Finch is famous for all the wrong reasons,” says Steve Sass, who runs On the Perch Bird Park in Tathra, where he has two breeding colonies of the endangered finch.

Adani’s groundwater treatment plan was approved last week by the Queensland Government – the last key hurdle before preliminary work can begin. This latest step follows the controversial approval of a management plan for the finch in late May.

Adani says, “following recent scientific advice from the Queensland Department of Environment and Science, we have added more detail to the Black-Throated Finch Management Plan on items such as cattle grazing intensity, habitat and population management and also delivered updates to our ongoing research plan.”

The mine will be the largest in Australia and one of the largest in the world, with six open-cut pits and five underground mines covering a total of 68,923 acres of finch habitat.

Because of public outrage over proposed large-scale mining activity in the last known habitat of a critically endangered species, the finch is now well-known. Steve says he often has people coming in to ask: “do you have the ‘Adani finch’?”

“We have a total of 20 black-throated finches at the park,” he says, “and they are fantastic birds to watch, always on the go and there’s lots of social interaction, lots of head bobbing. They’re real characters.”

The finch, once common across South-Eastern Australia, was declared extinct in NSW in 2016 and is considered to be on the verge of extinction. Its biggest threat is habitat loss, including the increase in grazing land, as the finch relies on the seed heads of native grasses for food. 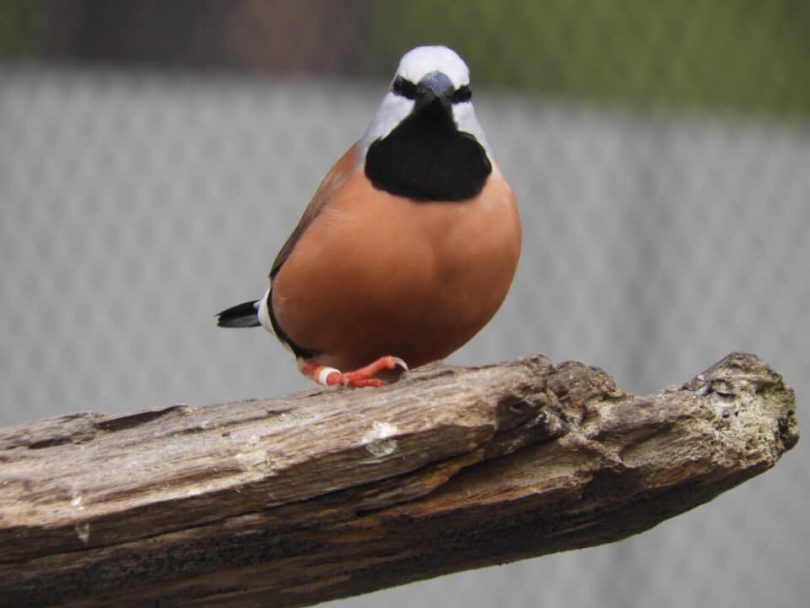 One of On The Perch Bird Park’s resident Black-Throated Finches. Photo: Debbie Osiecki, On the Perch Facebook.

“We think of extinctions as something that happened early, right around colonization but the reality is that extinction is ongoing,” Steve says. “Probably the main reason the birds are extinct in NSW is because of agriculture.”

Part of the newly-approved Adani finch management plan requires that 33,000 hectares of dedicated conservation land surrounding the mine site will be managed by the mining giant as habitat for the finch and other local native species.

Critics of the plan say that expecting finches to move off the mine site and onto the conservation land is madness, especially when very little is known about how similar the environments are and without accurate estimates of finch populations in either location.

“From an ecological perspective, when a species is living in the wild, it’s because everything they need is there,” Steve says, “and if they are not living somewhere, there’s a reason.”

Steve, working with the Finch Society of Australia, is one of many aviculturists ensuring that there is an insurance policy in place should the effects of human activities mean that the Black-Throated Finch disappears forever in the wild.

“This finch is reasonably secure in captivity,” Steve explains, adding that the birds do require some special treatment in order to breed successfully in captivity, including being fed live insects that Steve breeds onsite and a made-to-order seed mixture.

“It’s not just food – a lot of thought goes into planning the enclosure so that they feel comfortable enough to breed.”

Steve’s plan seems to be working – although it’s a little early in the season, he has already noticed some distinctive nesting activity from his finches.

Steve Sass continues to work tirelessly to preserve the Black-Throated Finch and other threatened Australian birds. Visit On the Perch on your next trip to the Sapphire Coast to support his efforts.

Bethany Williams - 54 minutes ago
Ric Hingee that’s something that would be AMAZING.....if it was able to happen! It’s been floated before, but the issue i... View
Ric Hingee - 2 hours ago
Ella - I am surprised you have any money to donate to Labor after paying all the excessive taxes, charges and rates that the... View
Ric Hingee - 2 hours ago
Bethany Williams The minority parties and independents needed to find common ground and run as a team. Otherwise they are pro... View
News 53

Evan Hawke - 4 hours ago
Darron Marks I totally agree that the roads in Gungahlin use to be shocking and roads like horse park drive needed upgrading.... View
Darron Marks - 15 hours ago
The increased spending to duplicate some of our arterial roads has made a difference you are correct. But to say there wasn't... View
Evan Hawke - 1 day ago
Glory Hammer I totally agree that every area needs politicians who fight for there areas. Most of the politicians in my area... View
Property 10

thebscaller - 9 hours ago
Joke of a leader and party. They are making some bold statements and promises that don’t add up. There is no way these prom... View
Acton - 11 hours ago
A conservative is someone who is averse to change. The Labor Party has now held government in Canberra for 19 years, proving... View
JS9 - 12 hours ago
"The problem would appear to be how to pay for them and it’s not easy to pin down Mr Coe on where the money will come from... View
ACT Election 12

Bega Valley fire contained and under control on Day 44