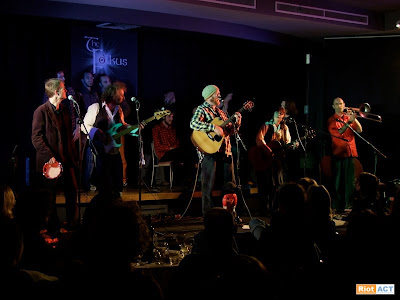 Heading south of the lake for music struck many cloistered Inner Northicans as a strange idea.

But for the tribute concert to the late great Baterz (who’s ghost can still be heard doing 2XX promos) we were willing to take a chance.

No-one was willing to drive so a cunning plan was hatched to meet at The Phoenix, catch the Drunk Uncles set, and then get a taxi to the Italian Club in Forrest where the gig was to be held in the Folkus Room.

Slightly late the taxi was piled into and we were seamlessly delivered to the venue.

My first impression was “wow, this is a really big room and a big stage”. I’ve become used to bands playing in corners and the bass player decapitating anyone trying to get to the toilet.

My second impression was that everyone was sitting down around tables as at a formal dinner.

My third impression was that we were late. Music that one can be late to is not a concept one normally encounters in the micro venues of the north. I was even startled to be informed as to where my seat was.

Live music events in the Inner North normally involved people standing at the back talking, people in the middle sitting intently and listening, and people up the front dancing.

Here the whole audience was in the sitting and listening mode. Talking people were asked to be quiet.

For an event marketed as “great big squiddy fun” it wasn’t quite what I had in mind, although maybe the squid do prefer being a passive audience.

It’s not a criticism at all. A big audience solely engaged in listening to the music is a wonderful thing. It just took some adjusting to. They really do thing differently south of the water.

Up on stage the music provided all the madcap hysteria one would expect from a tribute to Baterz. Songs about hanging out in Target for the air conditioning, teenage face sucking and goonbag swilling, giant squid, arms turning into crabs, and the social niceties of heroin addiction.

The amazing tribute CD, featuring the likes of Tex Perkins and Deborah Conway, is available from Fizzygo Records.

UPDATED: As promised here’s some video of the night. If you like what you hear you’ll love the tribute album:

After Salut Baroque the night before at Llewellyn Hall with maybe 150 people, The Italian Club seemed positively cosy! In fact, I think Salut Baroque would have been a lot more interesting to hear at Folkus, despite the crap acoustics for non-amplified music.

I think Billy does a pretty good job of making the vast Italian Club ballroom into something reasonably intimate –not using half of it is a good start.

Those huge round wedding tables have got to go, though.

It’s quite a shock sometimes these big stage/ big rooms. I used to play a lot of gigs back in the late 80s and early 90s in places like this. They can be quite intimidating.

Good to see it was a success.

As one of those listening intently, I can’t quite see how that equates to “passive audience”. Perhaps “engaged, committed audience” (plus a couple of people who just nodded off). There were some members of the audience that were sufficiently passive that they arrived late, and others that were even more passive: talking through the songs. Sounds like some more active members of the audience asked them to get a bit of folkus…

Meanwhile, in breaks in the music, people were celebrating all kinds of musical and non-musical things about Baterz; and non-Baterz things about music; and even non-Baterz, non-music subjects like pizza and why the Chinese restaurant at the Italian club is more reliable than the Italian bistro.

Some great versions of Baterz songs (and a couple of dodgy ones for contrast).

I only knew him through his music and the strange language he left to some of my younger friends.

Last night they done him proud.

Geographers take note: people listening intently to music (or dancing intently to it) is not restricted by watery landmarks. Raucous partying is also geographically blind.

Lesa Schuster - 2 hours ago
The housing prices need to come down, it’s very hard for many people........it’s pretty city though and does not feel lik... View
Acton - 4 hours ago
The Canberra lifestyle is fresh air, trees, birds, roos, mountain views, bush and lake walks, good roads, bike paths, kids, p... View
Jeff Smith - 6 hours ago
I think we are both concerned about the same bigger problems and to some degree on the same page. I certainly never want to s... View
Opinion 81

Lucy Jane - 3 hours ago
4 day week for everyone but everyone gets a different day off. Will help immensely with traffic congestion and has been trial... View
Ronnie Adams - 7 hours ago
Helicopter 🚁 View
Julie Macklin - 1 day ago
I cycled and rarely had to face the parking problems people complained about. When it rained I took the bus, even though I ha... View
Community 15

Malcolm Roxburgh - 7 hours ago
The government has to release more land not make it easier to raid your super. This only makes for more cashed up buyers and... View
assiduous - 17 hours ago
Low lending standards and inflated bonuses for originating mortgages based on ever rising values are core features of our ban... View
Pradeep Bishwakarma - 17 hours ago
Crazy market Shiva Sapkota! Only the RBA Can fix this View
News 1

Stephen Saunders - 8 hours ago
I've been on the Donor Register for many years, and I don't think my family objects, still in practical terms, I have little... View
Breaking 2

Smackbang - 9 hours ago
How about you stop passing judgement on someone you know precisely nothing about? View
Motoring 5

HiddenDragon - 21 hours ago
Another case study of the incompetence and impracticality of this government. Consumed with the big picture, feel good, sound... View
Capital Retro - 1 day ago
Oh, the perils of virtue signaling. It would be hilarious (like an episode of Yes Minister) if it didn't mean this will cost... View
Opinion 1

How hearing loss doesn’t have to stop the music

@The_RiotACT @The_RiotACT
With access to industry, research and retail, a new Poplars Innovation Precinct deal is set to open opportunities for @UniCanberra students https://t.co/aRsFLTnv3Q (1 hour ago)