The Balkan Elvis Mikelangelo coming to the polo! 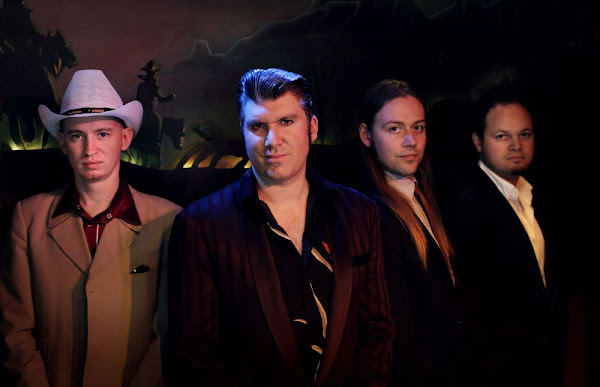 MIKELANGELO AND THE TIN STAR at the POLISH CLUB OCTOBER 26

Sounding like they have barreled straight out of a classic Tarantino film, Mikelangelo and the Tin Star are all blazing tremolo guitars and thundering drums. Frontman Mikelangelo is part 50’s crooner, part beast possessed – the debonair bastard love child of Elvis Presley, Johnny Cash and Lux Interior, with a voice deeper than the deep blue sea and the sharpest suit collection this side of the equator.
He formed the Tin Star in Melbourne in 2009 inspired by a love of The Shadows, Link Wray and Ennio Morricone movie soundtracks. The group quickly built a rabid fanbase through their live shows and festivals appearances. 2011 saw the release of their debut album ‘The Surf ‘n’ Western Sounds of Mikelangelo and the Tin Star’ on Laughing Outlaw Records. The album scored both FBI radio and PBS album of the week and a swathe of rave reviews across the music press. ‘The Surf ‘n’ Western Sounds’ also introduced audiences to the glamorous St Clare, her sultry vocals are one of the highlights of the album.
We are very pleased to announce that St Clare will be joining the The Tin Star live for their appearance at the Polish Club as the band return to their old stomping ground for a wild night of rock’n’roll. Opening the night are local Big Men The Fuelers, the night is presented by Aprils Caravan and there will be Vintage sets and fashions throughout the show.

“If Las Vegas had a beach, and a clone made from the mixed DNA of Elvis Presley and Nick Cave had a band that played surf rock on that imaginary beach, then the music Elvis Cave’s band played would sound like Mikelangelo And The Tin Star”. Rave Magazine

And with the Fuellers? Colour me excited. 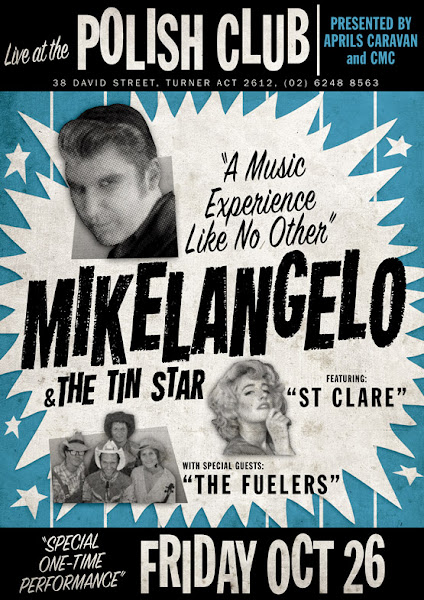 2 Responses to The Balkan Elvis Mikelangelo coming to the polo!
Filter
Showing only Website comments

where for art thou Prikharness

These guys are brilliant. I saw them many many years ago at Tilleys.

Margy Duke - 2 minutes ago
We Would have done it anyway!... View
M.J. Leonard - 15 minutes ago
Steph Brimson Could you tell me what section of the Constitution you're referring to? Because I don't see anything in there a... View
Mike Davidson - 46 minutes ago
Imagine the BO😂😂 View
Property 25

Alex Elliott - 1 hour ago
How can Braddon and Dickson get $14 million combined and the single bus depot building get $6.5 million. I'd like to see how... View
Ian Daun - 12 hours ago
How about replacing the letter boxes that have been removed. View
Adam Meadows - 12 hours ago
Yes, to hell with the homeless. It was only -4 last night, the big girls' blouses. View
News 22

Elroy Jones - 4 hours ago
If you'd like to live in a rural setting then perhaps consider moving away from the city. View
Property 5

John Brinsmead - 14 hours ago
wonder when we'll see a da for an 8 to 20 story building. View
Theresa Rand - 20 hours ago
Very sorry to read this article... my husband and I do not live in Weston but would make a trip to Weston to visit the booksh... View
show more show less
*Results are based on activity within last 7 days

UPDATE - 1 June: Police have now arrested a man and a woman, and recovered a weapon, in relation to a...
Motoring 19

A Geocon proposal for an eight-storey mixed-use development in Kingston is out of step with the character of the area...
News 36

The ACT is splashing $13.9 million in Canberra's inner north to upgrade lighting, accessibility and parking along streets in Braddon...
News 34

ACT Policing has confirmed that it will not be focused on enforcing social distancing and health directions during Black Lives...
News 27

The ACT Government's plans for a small car park opposite Cooleman Court in Weston that will cost more than $600,000...
Motoring 19

@The_RiotACT @The_RiotACT
Fidget the friendly lorikeet is at @rspcaact waiting for her new owner to come along. Could it be you? https://t.co/Z0hnglnnYP (41 minutes ago)

@The_RiotACT @The_RiotACT
Can you see yourself living in a luxury 10th floor, four-bedroom CBD penthouse? Here's your chance to make this stunning home yours https://t.co/z1ZSZFTIQv (1 hour ago)

@The_RiotACT @The_RiotACT
Riots have paralysed the US, but in Canberra today thousands of protestors gathered peacefully to draw attention to the messages of Black Lives Matter including Indigenous deaths in custody and police violence https://t.co/m0TZYhn1Hx (2 hours ago)