The Battlefield Challenge comes to Canberra 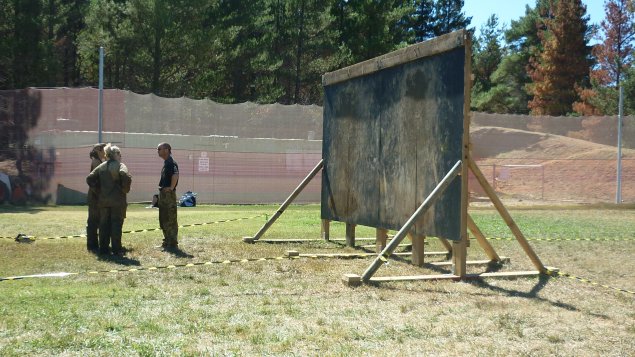 The paintball grounds in Pialligo were filled with people in camouflage gear and carrying plastic guns for Operation Blackhawk “Battlefield Challenge” over the weekend.

Operation Blackhawk follows the theme of mud filled obstacle courses made popular by events such as Tough Mudder.

I did the course on Saturday morning – happy that it dawned a spectacular sunny day and quickly rose from a minimum of two degrees.

Donning camouflage gear marked small that was unfortunately far too big for me (so much so that by the end of course, my pants were so weighed down by mud and water they were almost falling off) and painting my face in green and brown, my team and I (some of the team pictured below) were ready to take on the 7km military inspired course.

The course is set over the natural terrain within the paintball fields so there was lots of dry creek beds to run through and fallen tree trunks to jump over, combined with man made obstacles including lots of barbed wire that you had to crawl under on your stomach or back, as well as walls to climb over. By the end of the course, it was daunting to have to do the barbed wire obstacles – it was hard work and my abs were pretty sore the next day! There were a total of 40 obstacles on the course, ranging from easy obstacles to ones that you needed your team members to help you through or over.

Of course, there was lots of obligatory mud that you expect at these types of events. In terms of mud quantity, this course gets top marks. It was cold, slippery, and thick and there was always a tough climb at the end to get out of the mud pit. You could always tell where the mud pits were by the squeals and yelling as people entered the cold water.

Towards the end of the course, you were required to don a weight pack and go through 1km worth of obstacles – including more mud. The course also used some of the obstacles already in place for paintball, such as climbing through or under cars.

The course culminated with two obstacles where you needed your teammates to work together to achieve – including a climb over a three metre high wall.

This was well worth going along to and is great for all fitness levels (there was also a kid’s version of the course which was 1km long). If you were trying to work up to Tough Mudder this would be a good starting point to test what you’re capable of. You can take it seriously and time yourself (I think the average time to complete the course was a bit over two hours) or just have a fun day out with a few friends.

It’s great to see events such as Operation Blackhawk being held in Canberra and not have to trek to Sydney to be able to have a go at events like this. Miss Muddy, held late last year and scheduled again for October 2015, was also a great obstacle course but was just a fun event to do more than anything challenging.

While Tough Mudder has much more elaborate obstacles and is much longer at 20km – it is also priced around $160 to participate – more than twice the price of Operation Blackhawk.

If Operation Blackhawk comes to Canberra next year, I’d probably participate again – although I hope their event organisation improves. While the course at the paintball grounds was good, parking space at the facility was not at all adequate and they didn’t seem to have enough people on the registration desk. At 9am, there was already a long line to register and I know a lot of people missed their booked waves.

Did you do the Battlefield Challenge? What did you think of the course?

I desperately want to do paintball !
Am i the only person who has not done paintball yet ?
Can anyone tell me where should i go for it where they provide all the protection gears.

Tania Shaw - 2 hours ago
Jesse Ward yes I am fully aware of that View
Lance Hallström - 11 hours ago
Lyndon Ogrady did your house evaporate when you settled? If an investor bought it then it's still for rent. If a renter bough... View
John Hynes - 12 hours ago
Gee, the Labor Party getting commercial policy wrong? Never!... View
Opinion 102

Chanelle Fyve - 9 hours ago
Can they lend them out to backyard - I know the Canberra bee society puts them into people yards so they can have different v... View
Bente Hart - 18 hours ago
Susan Nicholls 1kg sugar to 2L water heat gently until sugar is dissolved. Cool down. Poor into shallow tray with straw or th... View
Capital Retro - 24 hours ago
There are definitely more bees than flowers in my garden this season. I think the urban situation will improve but it's prett... View
Business 7