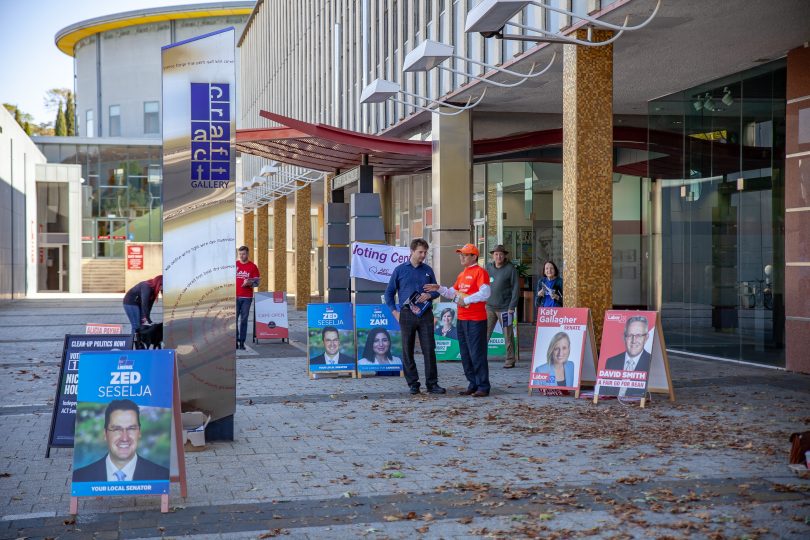 Pre-poll voting in the city for the May federal election. Photo: George Tsotsos.

The Labor Party’s investment vehicle and a prominent real estate company head the list of political donations from the 2018-19 annual returns posted by the ACT Electoral Commission.

Consultant Liesl Centenera topped the private donor’s list with $30,000 given to Labor for the federal campaign, while John Little of Reid gave the Greens $10,000.

The Community and Public Sector Union was the biggest union donor to Labor, giving $42,453.68 while United Voice provided $9175.46. The ALP National Secretariat helped out with $16,287.75 for the Federal campaign.

Dolla Bill - 2 hours ago
Tom rubbish together, recycle together, wheelies boys for life View
Ashley Wright - 3 hours ago
Peter Mcleod it is a dispute between a private company and its workers. Nothing to do with Andrew. View
Stephen Finnegan - 5 hours ago
Fletcher Beverley Good for them. When's the last time paramedics went on strike?... View
Food & Wine 22

Julie Macklin - 12 hours ago
Fortunately the long grass looks prettily scenic, until they do get to mow it. View
Tom McDonald - 12 hours ago
Correct. Same complaints year after year. View
Nathan Horton - 12 hours ago
Julie Macklin they have known for 3 months it is going to be a wet spring and summer. Yet chose not to be proactive and prepa... View
Community 7

ssek - 20 hours ago
Give it time and the greens will have all kinds of legislation around halloween to prevent children having fun. View
News 2

ssek - 20 hours ago
These marine parks are ridiculous. Stopping a few people with a rod and fishing line from catching a couple of fish does not... View
Opinion 8

Capital Retro - 22 hours ago
I don't agree with a few of your claims. I am a senior person and at no time in my life have I ever heard of house ownership... View
Motoring 11

oh_ - 22 hours ago
As much as the noise, disruption and burnout smoke is trying for nearby residents, it does bring money and something differen... View
Rob Thomas - 1 day ago
Floriade? View
Tim White - 1 day ago
David Perkins you do know that it created jobs and brought millions into our local economy and in some cases kept many small... View
News 9

Chris Hobbs - 23 hours ago
Will ACT residents benefit from 30% canopy cover by 2045 from a massive tree investment, yes! Will we need to remove some old... View
Alice Paris - 24 hours ago
I dont think you understand what is happening here Chris. The Greens and Labor are responsible for the removal of so many mat... View
Bill Gemmell - 1 day ago
Alice Paris I think people need to talk to their MLAs and let them know how the feel about various issues. I certainly will b... View
Food & Wine 32

Tim Hutch - 2 days ago
The best way not to give them your money is to do the speed limit. It's really not that hard. View
show more show less
*Results are based on activity within last 7 days

Leadfoot drivers beware - the ACT's speed detection net is about to be widened with the addition of two new...
News 87

@The_RiotACT @The_RiotACT
Elizabeth Lee will need to reach out to the community, earn some trust and break the Liberals' bad habits, says Ian Bushnell https://t.co/p0Vi34kWyz (2 hours ago)

@The_RiotACT @The_RiotACT
The election's over and it's time for some fun. Our poll this week asks if we should celebrate Halloween or if it's commercialised nonsense https://t.co/JvbB9hOhZp (12 hours ago)

@The_RiotACT @The_RiotACT
There's plenty happening in Canberra over the coming week. Here are ten great things to do in the next seven days https://t.co/u9dwGfwghO (13 hours ago)