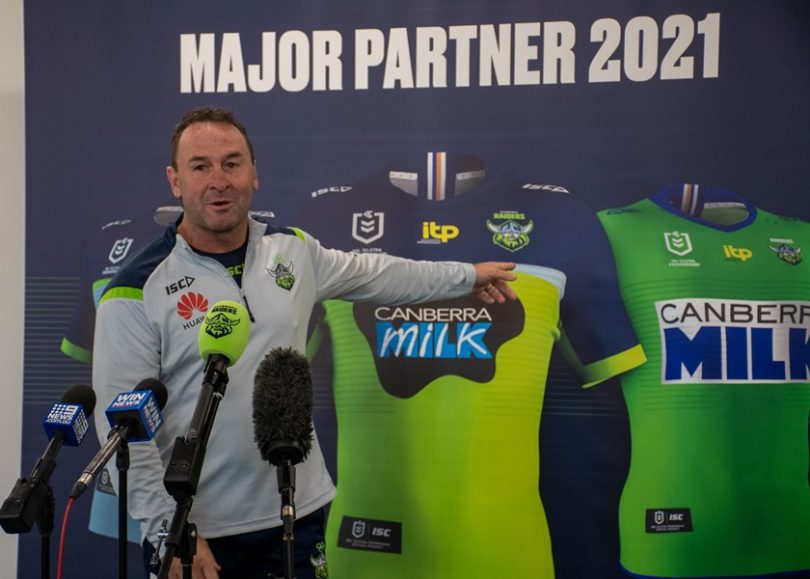 Ricky Stuart at the announcement of Canberra Milk as the Raiders major partner in 2021. Photo: Canberra Raiders.

The Raiders’ announcement that Canberra Milk would be the club’s major sponsor for the 2021 NRL season has a ‘back to the future’ quality.

With Huawei informing the Raiders that this season would be their last after nine years as a major sponsor, the club launched a search for a replacement.

It’s understood there was considerable interest, despite the COVID-19 pandemic, with the Raiders’ brand particularly strong in the wake of their on-field performances and strong positive presence within the Canberra and district community.

In the end, the club opted to go with Canberra Milk for the 2021 season, while negotiations take place with several potential major sponsors for the 2022 season.

Effectively the Raiders have gone for a partner with similar community values and existing synergy with the club.

Who could forget the iconic images of Mal Meninga holding the ’94 Premiership trophy, or the one of Bradley Clyde and Noa Nadruku also happily grasping that huge trophy, all with Canberra Milk emblazed across their lime green jerseys?

Canberra Milk will stay as a sponsor in some capacity in the 2022 season. In doing so, Canberra Milk has given the Raiders time to sift through potential sponsors without having to rush on making a decision.

Given the affection many Raiders fans have for the Canberra Milk retro jersey, the new jumper is expected to be a merchandising hit with supporters keen to display a link between the old and the new.

The sponsorship announcement couldn’t have come at a better time as the Raiders prepare to face the Sharks in the elimination final at Canberra Stadium on Saturday night.

The ACT Government has given the go ahead for an expanded crowd of 9 600. We all welcome the return of a more voluminous Viking clap to welcome the players onto the field for what should be an exciting final.

Time to bring back ‘Raider’s Lime’

I am SSSOOOO excited about this!!!!!😍