The Crucible at Theatre 3 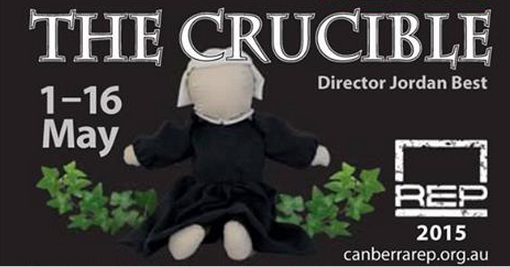 The first production for REP’s 2015-16 Season—and the second for 2015—is Arthur Miller’s The Crucible.

Opening on 1 May, the production continues until 16 May 2015 at Theatre 3, 3 Repertory Lane Acton.

This Classic drama directed by Jordan Best presents a powerful and timeless depiction of how intolerance and hysteria can intersect and tear a community apart.

This is Best’s second directorial role with REP, previously directing Robert Harling’s Steel Magnolias at Theatre 3 in 2014. Join the REP Company at Theatre 3, where you will be transported to 17th Century Salem and let the unraveling begin!

The Crucible, presented by Canberra Repertory

Mateusz Jan - 6 minutes ago
Anthony Nolan did you give the goats to the act government... View
Raymond Evans - 4 hours ago
Canberra was so much better off when we were part of the federal government , since our local government started everything h... View
Anthony Fernance - 4 hours ago
If it’s only 2 weeks behind then they need to improve the mowing schedule a lot because grass don’t grow 4ft high in 2 we... View
Property 6

Cheryl Thuillier - 1 hour ago
Was a great place. View
Opinion 128

J D - 4 hours ago
Oh Good Grief ! Nary a sympathetic word for instance about on-going national Deaths in Custody, and our systemic ill-conseque... View
News 23

Tom Dale - 4 hours ago
As the APS "permanent staffing" model is still essentially based on the Northcote-Trevelyan Report of 1854 which re-organised... View
Vladimir Svoboda - 4 hours ago
CPSU has been advocating for greater homogenisation across pay bands for a decade and it was Labor policy at the last electio... View
Laurel Haskell - 5 hours ago
People leave the PS and start up their own industry because they KNOW the System..Consultants, Employment Industries, Care In... View
News 6

JC - 5 hours ago
No it so sure about your statement that longer travel times don’t bring more passengers. In the act we already have an exam... View
Capital Retro - 6 hours ago
Well, the future generations will be paying for it so it's the ACT Labor/Green government's legacy to them. And it's very muc... View
show more show less
*Results are based on activity within last 7 days

@the_riotact @The_RiotACT
In the last week alone, @genesisowusu took home 4 ARIA and two Triple J awards. We sit down with the #Canberra artist behind Owusu's most iconic piece of gold jewellery - his gold grill https://t.co/r576TmanM0 (51 minutes ago)