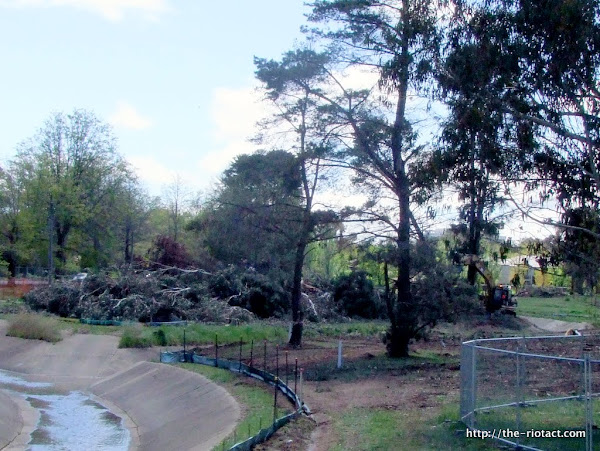 The Liberals’ Vicki Dunne has pointed out that the current project to tear up previously pleasant parts of the Sullivans Creek network and replace them with large water storages masquerading as ponds is blowing out in cost.

“After Simon Corbell was forced to reveal in Estimates a more than a 50 per cent blowout in the urban waterways project because the reticulation pipes were too small, it can now be revealed the whole Inner North Stormwater network will actually cost $31.6 million, significantly more than originally announced,” Mrs Dunne said.

“This blow out shows that the ACT Labor Government doesn’t care about the costs that taxpayers bear and further casts doubt on the viability and cost benefit of a project that is costing millions more than first thought.

“Even before the massive cost blow-outs and revelations of that more than $10 million extra funding was needed, I was expressing concerns about the economic benefit of the urban waterways projects.

“I proposed a motion in the Assembly recently to have the ICRC make an assessment of this project; these latest numbers confirm once again the importance of this assessment.

No word from Simon.

“No word from Simon.”

He is still trying to wipe the egg off his face. This is an excellent example of the ‘Peter Principle’ at work: People will rise within a heirachy until they reach their level of incomptence. I doubt Simon or his bureaucrats will be held accountable for this one. Any guesses on what the next f%$k up will be ???

Alison Brittliff - 3 minutes ago
Lucas Anasdow it’s about who we need to protect first, front line staff, then the most vulnerable , the plan isn’t about... View
Rodney TatStan - 14 minutes ago
I'd prefer mederna after the results from Pfizer anecdotally by my family getting it in USA not being that great. Variety is... View
Rick Jackson - 34 minutes ago
Julie Donda - Hey, don’t go criticizing Dr Google... what else would keep conspiracy theories alive? View
Food & Wine 3

Toni Isaacson - 1 hour ago
Not for social housing? Missed opportunity. View
Trevor Wilkins - 1 hour ago
haha! Thats not a name I remember and I visited a lot of buildings in Woden. I'll ask my friend who worked in Vets Affairs if... View
Marco Spaccavento - 3 hours ago
Fiona Hall Yep, absolutely. Increase supply and help prices ease up. View
Community 3

Josh van Limbeek - 1 hour ago
What a great article! My Mum is a Red Hatter and she has so much fun too ❤❤ View
Jo Jo Joey - 2 hours ago
Barbara Bennett, I love how much enjoyment your ‘red hatters’ gives you’ 🎈💜❤️💜 View
Property 27

Elroy Jones - 1 hour ago
Peter Bee there are a lot of places it could go. Majura the most recent I’ve heard. View
Christopher Cuba Rabanal - 2 hours ago
Better lighting around the carpark View
Andy Sell - 2 hours ago
2 words mate, lite rail View
News 17

Mookie Moo - 2 hours ago
Assuming this means 80% by Oct within the adult population only? Because roughly 20% of the population would still be kids, w... View
Community 35

Theresa Rowan - 4 hours ago
Margaret Smith was in my class at St Clare's a gentle soul RIP. View
show more show less
*Results are based on activity within last 7 days

Who would have thought that Canberra's Nick Kyrgios would morph from tennis brat and national embarrassment to statesman of the...
Food & Wine 32

More than $300 million will be set aside to help the Territory transition to net-zero emissions in the upcoming ACT...
Breaking 22

Vaccine rollouts will begin in a month after the Pfizer COVID-19 vaccine was provisionally approved for use in Australia by the Therapeutic...

Paving the way to the NSW Election

@The_RiotACT @The_RiotACT
Michelle Heyman's stunning return to football began with a simple question on Instagram: “Hands up if I should make a comeback to the W-League?" https://t.co/UNn8rDWuj3 (41 minutes ago)

@The_RiotACT @The_RiotACT
The 2021 Australian of the Year is Grace Tame. Grace is an outspoken advocate for survivors of sexual assault, particularly those abused in institutional settings https://t.co/Q6nMb1PGRL (56 minutes ago)

@The_RiotACT @The_RiotACT
Times have been ruff, so @QTCanberra has rolled out the pet-friendly red carpet & opened its doors to allow furry best friends in their luxury hotel rooms https://t.co/V89hSF18w9 (2 hours ago)