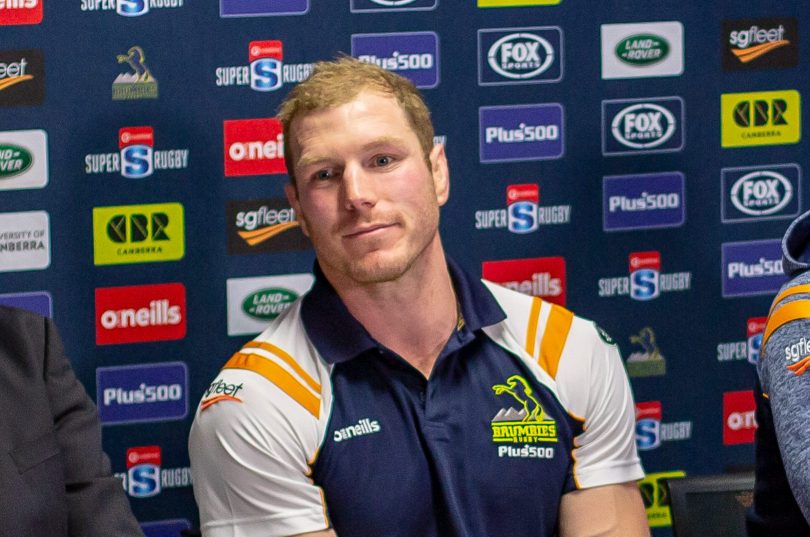 David Pocock at his announcement. Will his and several other high-profile players’ departure signal a change for the Brumbies? Photo: George Tsotsos.

As the Brumbies prepare to play the Jaguares in the Super Rugby semi-final this weekend in Argentina, the organisation finds itself at a fascinating juncture.

The playing group is one of the tightest I have witnessed in my time covering sport in Canberra and nationally for over 30 years, with each and every player showing commitment to each other.

If you required evidence of this, look no further than the way the playing group has been able to avoid being impacted by the commentary surrounding crowd numbers and concerns about the financial sustainability of the franchise.

There are also stories emanating from the playing group about general day to day support for each other, which is a derivative of a culture most sporting clubs strive for.

The fact that they have been able to recover from a relatively poor start to the season also points to a belief in the structure and game plan implemented by coach Dan McKellar, and his assistant coaches Laurie Fisher and Peter Hewat.

So with nine players departing the Brumbies at the end of the season including six players considered to be leaders within the club, Christian Lealiifano, David Pocock, Henry Speight, Rory Arnold, Sam Carter and Josh Mann-Rea, how will the Brumbies maintain their high-performance on the field and the supportive environment between and among players and staff?

With so many key players departing, it would appear the semi-final is even more crucial than would normally be the case. This is part of the so-called ‘window of opportunity’ with the team on its best day capable of beating any team in the competition.

At the end of the season though, there will no doubt be the sober realisation that so many stars are departing. And they will be missed by one and all.

Outside the Brumbies community, it may be considered a rebuilding phase for the team. This terminology though, is likely to be dismissed conclusively by the coaching and management group. They have seen this coming and have been prepared.

This is an opportunity for the next generation, many of whom are already starting to establish themselves; players such as Nick Frost, Noah Lolesio, Mac Hansen, Tom Ross and Lachlan Lonergan. Another player who has impressed in the ACT competition is Royals back-rower Rory Scott.

They will be now be presented with the same opportunities that the likes of Lealiifano, Carter, Arnold and co received when they were moving from the junior to senior ranks.

Supporters also need to show the same level of patience to the next generation as was afforded the departing stars.

For the time being, it’s important to emotionally embrace the current group of players; a group so evidently playing for each other and really showing that they are able to deliver world-class rugby.

He is already in politics – the wrong side unfortunately.

this is someone I'd actually like to see go into politics. Co president of a Trans Tasman republic with Jacinda Ardern

Pity Pocock couldn't repay the ARU who supported him through his 'kinda playing rugby' gap year in Japan and his injuries, and stay on with the Brumbies for another season.

Futureproof - 2 hours ago
Vote early, vote often. Will voter ID solve this?... View
kenbehrens - 3 hours ago
Stephen, as it turns out, School ID cards are a thing, if you work in a school you'll need a Working with Vulnerable People's... View
franky22 - 7 hours ago
I take it that the 55 senators are part of the nutjobs still claiming that the election was stolen from Trump ? View
News 2

Frank Spencer - 2 hours ago
Leaf litter makes the best compost. View
TimboinOz - 3 hours ago
Leaf-litter!!! At home? Buy a 2 or 3 layer worm-farm and start gardening. Even if it's just for salads until Autumn. And, eve... View
News 3

Futureproof - 2 hours ago
The roundabout at Monaro Highway/Isabella Drive is particularly dangerous with the height of the grass. You should be able to... View
Capital Retro - 3 hours ago
That would be tantamount to the cosseted cyclists in Canberra who get free bike tracks and then complain that they can't use... View
bigred - 4 hours ago
Of course, both sides of politics could encourage interested and motivated residents to "adopt a patch" and reduce the total... View
News 1

Helen Roberts - 3 hours ago
I welcome FOGO in Cook. We are more able to separate food scraps. For example I have found that the coffee capsules we used t... View
Scott Harvey - 4 hours ago
Most people don't buy organically grown fruit and veg therefore the scraps aren't organic either. You cannot add non organic... View
Lifestyle 19