The Goddess of Water comes to Childers Street 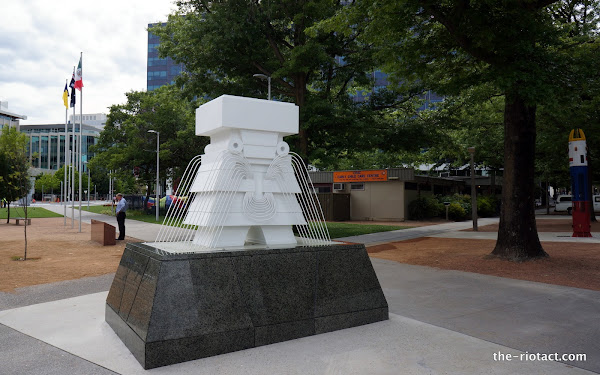 Chief Minister Gallagher has let it be known that a new sculpture has been installed on Latin American Plaza:

ACT Chief Minister Katy Gallagher and Her Excellency Mrs Beatriz Lopez Gargallo, Ambassador of Mexico, this evening unveiled a sculpture donated to Canberra by Mission Foods, with the support of the Mexican Government.

Installed at the Childers Street end of Latin American Plaza, the sculpture entitled Chalchiuhtlicue (the Goddess of Water), marks the start of sculpture walk, linking the Australian National University to the heart of Civic.

“It was my pleasure to assist with the unveiling of this new sculpture, which continues the successful collaboration between the ten Latin American countries that maintain diplomatic missions in Canberra and the ACT Government,” the Chief Minister said.

Last year Chile donated Fenix 2, a symbol of the cooperation between Australia and Chile during the 2010 Chilean mine rescue. Cuba recently commissioned a sculptor to visit Canberra to fabricate and install a Cuban sculpture.

For those who haven’t had the pleasure our sterile and arid celebration of Latin America in Canberra is on the corner of Rudd and Marcus Clarke Streets in Civic.

Sort of Transformers meets Aztecs…
Haven’t seen it up close but concerned about resilience against vandalism.

Had a close look at this art piece today, and remain bothered about it’s vulnerability to vandalism.
Also rust is already appearing around joins in several places of the piece.

There will be another building on that carpark one day. It is only temporary. Yes the park is nice. Particularly mid-winter.

That is good to know. Ever since the Lena Karmel Lodge was completed, every time I have driven past I have wondered how on earth approval could have been given for such a prominent position to be covered in a concrete carpark. So ugly.

Does anyone else think that it looks like a two-legged white elephant in a bridesmaid’s dress wearing a rectangular hat and crying?

i didn’t before but i do now – must pop by and have a squizz at it in the flesh. don’t get there now astromonkey has moved daycare centres; was/am a fan of the rocket, err mine rescue pod. it does rather need a tapas bar or something, though, to make it really ‘latino’. or a parilla, even better!

There will be another building on that carpark one day. It is only temporary. Yes the park is nice. Particularly mid-winter.

Pretty cool in an Eric Von Daniken Chariots of the Gods sort of way.

Sort of Transformers meets Aztecs…
Haven’t seen it up close but concerned about resilience against vandalism.

Not doubt the birds will play a part in that.

I like it, a nice touch for that area. The two tone design works well with the warm gravel and deep green foliage surrounding it.

It looks just like a sacrificial altar in Central America. Nice flat surface on the top.

Aesthetically, this is absolutely the worst “public art” I’ve seen in Canberra. (It’s a bad sign when they can’t name the sculptor)

Does anyone else think that it looks like a two-legged white elephant in a bridesmaid’s dress wearing a rectangular hat and crying?

Not that there’s anything wrong with that, of course. It’s an interesting object.

give it a week

I walked past it just before… I just assumed it’d have some sort of fountain-component. Someone should tip some water on it.

Just rode past this morning, it’s a great artistic addition to our city.

I was having a look at it this morning, it’s ok I guess if you like that sort of thing (better than Phallic Owls) but I think it needs a plaque describing what it is and who made/designed it.Maybe this is still to come.

Liam O'Toole - 40 minutes ago
Emphasis on international students. ANU is discovering the results of putting all your eggs in one basket. View
Matthew Soall - 10 hours ago
Maybe ANU should be more focused on teaching students then running the place like a business. View
Capital Retro - 10 hours ago
The alarm bells are ringing now: https://www.abc.net.au/news/2021-04-23/anu-unveils-162-million-budget-deficit-due-to-covid-1... View
Opinion 66