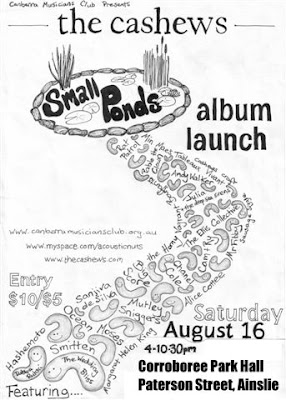 Once, in a particularly dim-witted moment, I made the error of describing Alison Procter, in an otherwise glowing review, as ‘big’.

I should, perhaps, have said she is a tall girl woman with a strong physical presence.

But I said ‘big’; and I’m not entirely sure I’ve been forgiven for it to this day.

So I shall not be saying that the upcoming launch of her band, The Cashews’, CD will be big.

The first show put on by the Canberra Musician’s Club (of which I am a member – no wait, a hall of fame member – despite being in no way a musician, in much the same way I am also a member of the Dickson Tradesman’s Club – although no hall of fame recognition at El Tradies) it features a cast of thousands (well tens, but a lot).

Yes that’s the same Chanel Cole as what was on Idol.

The show will go on at the scout hall on Macarthur Avenue.

For those unsure about it all you can hear some of their songs on The Cashews Myspace Page. Try the fish song.

URGENT UPDATE: The Canberra Musicians’ Club is reporting that the event has now been moved to Corroboree Park in Ainslie. 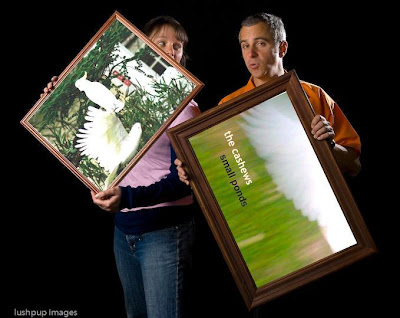 This will be a very, very, very fun event and I can’t wait to go.

I was listening to these Cashews in the wee hours of this morning. They are kind of quirky, surprisingly melodic and very original. All qualities of which I heartily approve. So you will no doubt be excited to hear that The Cashews now also have been awarded the official ‘Granny’ seal of approval.

Although the song that first grabbed me, was ‘gunnatell’, I did also enjoy ‘the fish song’ particularly on the second and third play.

Not that it matters if she had!

but at the time I was only referring to height!

What? you have since got shorter?

Alison is still big but only in a tall, infectious smile, endless generosity and massively talented sort of way. I’d be amazed if Alison ever had an above average (over 25) BMI

I too was Brobdingnagian once, but I would have forgiven you for saying so if you meant well.

John Vallance - 1 hour ago
Lucas Anasdow um.... because like all vaccines it goes through testing. once testing and trials and results are reviewed then... View
Property 15

Robert Morris - 6 hours ago
When will people in the ACT understand that our local Government has no interest in maintaining the bare minimum what they ar... View
Roderick Saunders - 8 hours ago
Avril Pounds the ability for residents to get pedestrian crossings etc installed does seem to vary for no apparent reason View
Avril Pounds - 9 hours ago
Lots of new speed humps around but not where my local school p&c have been begging for one for at least a few years now. View
Community 4

Katy Did - 7 hours ago
I remember View
Community 39

@The_RiotACT @The_RiotACT
Hot in the City: Love gaming? Enjoy it with your food & your friends by your side at Reload Bar & Games https://t.co/i24LIWpdje (5 hours ago)

@The_RiotACT @The_RiotACT
Been looking for a large, quality family home in one of Gungahlin's most exclusive areas? This stunning residence could be all you’ve ever wanted + so much more https://t.co/lh17g6PgsK (6 hours ago)