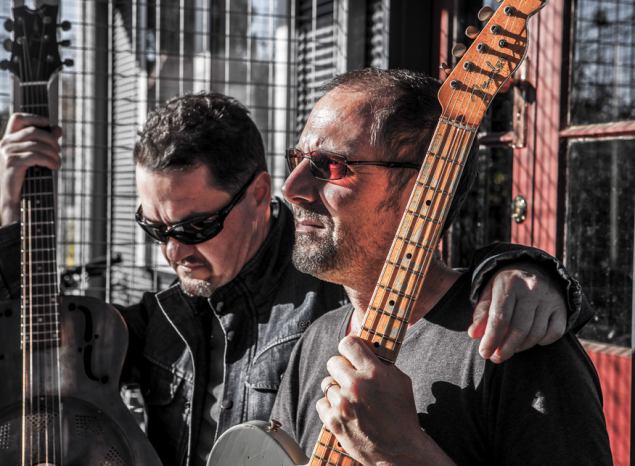 The Guitar Cases band create their own brew of laidback outlaw country and folk influenced blues.

The guys are regular performers at some of the best music bars in Canberra and are one of Canberra’s hardest working bands. If they don’t have a gig on you’ll often find them busking at Canberra’s Old Bus Depot markets where peeps hear them for the first time and follow them to the next venue that same day.

They are also regular performers on the South Coast and further afield.

Most of The Guitar Cases’ music is original with the occasional cover of one of their heroes: Johnny Cash; Muddy Waters; Howlin Wolf; Robert Johnson; Steve Earle; Elmore James; Waylon Jennings; and Paul Kelly.

Andy Daniels’ vocal delivery is impressive, being intimate and sweet one moment, to raw and powerful the next. Andrew Tatnell plays sweet melodies on his sublime Fender guitar. The multi-talented Ang Perusco plays blues harmonica, guitar and vocal harmonies. The master percussionist Red Herbert (formerly of Segression) keeps the outfit cookin’. They are occasionally joined by the folkin’ mad, Rick Saur, on bodhran.

When: Sunday 15 March
Time: From 2pm
Where: Harmonie German Club

Yeah I got them Berra blues.
etc

Adam Scott - 2 minutes ago
Jacob Gallin Smith keep left only applies at 90 or over, but very much agree with you about merging and indicators View
Adam Scott - 7 minutes ago
I regularly feel like the only one doing 40 in the 40 zones. Also do some drivers think that they use more petrol with their... View
Ali Light Alasady - 54 minutes ago
Tani Buist LEGIT HOW LONG HAVE WE BEEN COMPLAINING ABOUT THE IDIOTS ON THE ROADS View
Opinion 14

Mick Andrews - 6 minutes ago
Honestly I love doing 85 on the parkway, il stick too it😆 View
Brindie - 2 hours ago
Given that our main roads are so congested (Tuggeranong Parkway; Adelaide Avenue) and that our public transport system is so... View
Ol L - 3 hours ago
Canberra. If the traffic gets bad just put in more traffic lights, that’ll work real good…..check out Hindmarsh Drive Phi... View
Breaking 15

Acton - 1 hour ago
Agree. Its broken. The only people who deny its broken are those whose powers of critical thinking are seriously deficient. View
Acton - 2 hours ago
The more we hear, read and know about AstraZeneca, in Australia and overseas, the more reason there is to hold off until Mode... View
whatwik - 2 hours ago
FWIW, wife woke next day after her first AZ with a fever and headache - responded very well to a Nurofen and a Panadol, and t... View
Food & Wine 10

@The_RiotACT @The_RiotACT
ChooseCBR data reveals that some businesses processed more than 500 vouchers in the 25 hours the scheme ran, and almost 40 per cent of the vouchers were claimed at stores like grocers https://t.co/vVrNddImTH (25 minutes ago)