The Jester Ball – With lots of pictures. 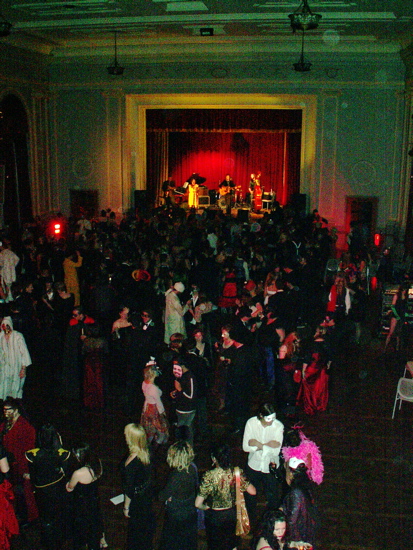 With apologies to our reader “Mess”, I’m going to hijack the story he started last night with these words:

The Jester Ball tonight [Last night now] seemed to me like a smashing success. It was well run and well organised and with close to 400 people in attendance, a whole heap of fun. Some people went all out with awesome costumes and elaborate masks, and others chose the more casual approach wearing little more than jeans, t-shirt and mask.

The music was entertaining, as well as the burlesque show and the Jester himself was an aboslute riot.

As someone who had absolutely nothing to do with the event, except see the ad on the-riotact.com and decide it seemed like a good idea, I would like to congratulate the organisers and say ” I cant wait for the next one”, I was also wondering when the video clip comes out?

Having personally under-written the Jester’s Ball advertising on RiotACT I did have a $100 interest in the event’s success. Therefore I was very pleased to see what looked like a raging triumph from the dance floor. Many in the crowd wondered if perhaps Tom Woodward could put one on every month or so? Interstate visitors dragged along by friends were certainly expressing a revised opinion of Canberra night life.

There were enough fishnets present to extinct a whole variety of tuna, enough feathers to dust a palace, and enough fun and excitement to raise the spirits of anyone. But enough of me telling, here’s a lot of pictures:

[Note: To avoid a repeat of the Melbourne Cup Fiasco please bear in mind that the people in these photos have allowed their good time to be interrupted to provide you with amusement. So if you can’t say anything nice, best to not say anything at all] 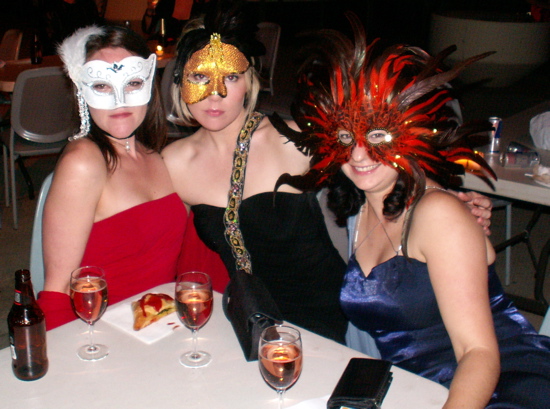 The Albert Hall in readiness: 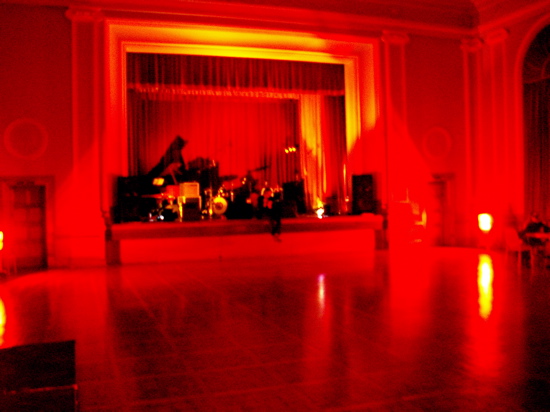 Early on I had my camera accidentally in “sunset” mode. This, combined with the flash and the heat lamps radiating in every corner, actually created some decidedly interesting shots. 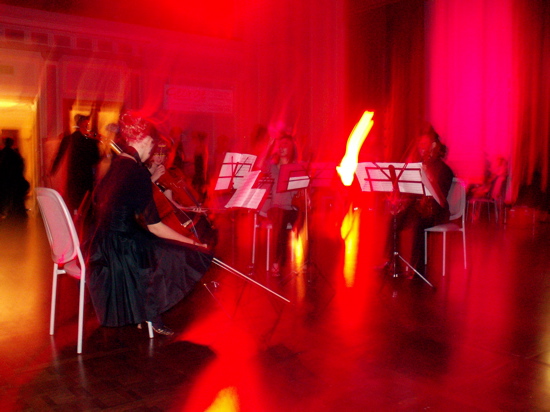 And here’s the man of the hour, Mr. Tom Woodward: 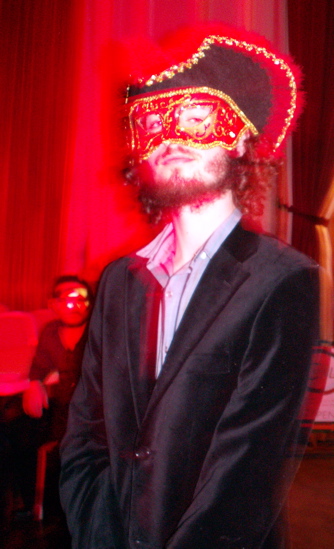 Then we took stock of the astonishing costumes: 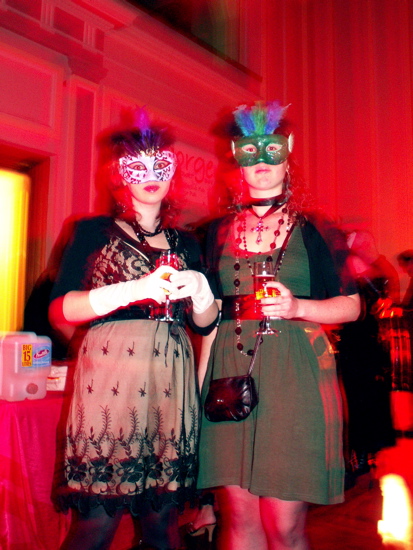 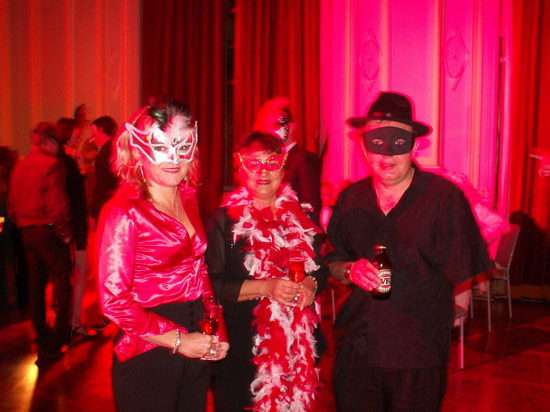 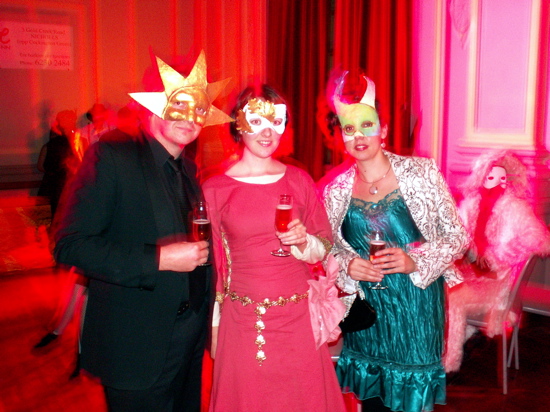 14 Responses to The Jester Ball – With lots of pictures.
Filter
Showing only Website comments

and so say all of us.

Well done to local muso Tom Woodward. Numerous friends and myself attended the ball and had a wonderful time.
Wearing masks was a great idea. It injected us all with a subtle confidence and it was fun to see some of the very creative costumes. Corsets, fishnets and feathers galore!
Bring on the next Jester Ball, I say.

10.30?? Was still going strong when I left at 11.30 to get to the after party early and there was numerous after parties that I was aware of (transit being hte official one where the last few photos were taken from but others at the Hyatt and other venues)

Hopefully the next one will keep going past 10.30pm…

To each their own.

In my experience Tom is more shy with people he doesn’t know well than arrogant. It’s easy to mistake that aloofness for arrogance and it’s something I’m sympathetic to as people get me wrong the same way sometimes too.

I don’t know the details of your relationship so maybe I’m off base there.

Eye contact under masks was interesting, a feeling of anonymity combined with trying to figure out if one knew the person behind the mask lead to a lot more eye contact than was usual. I think you’re being unkind to suggest this is a bad thing.

Pandy, I think they look OK. I hope you were being sarcastic?

Sounds like this thing is going to become a Canberra institution. Tom Woodward, if you can balance the production of quality entertainment like this with your offensive real-world arrogance, you might become something Canberra values.

Still, I’m glad I wasn’t there. The masks were a good way of hiding the attendants’ plainness – honestly, look at the pose of the girls in Picture 2. Would they look that proud without the masks?

In all fairness though it looked like everyone had a good time, sort of like Eyes Wide Shut before that Scientologist showed up.

if you’d like to see the jester perform again, come to narrabundah college’s production of Under Milk Wood!

was good, I now however have a fetish for red lights. Now to track down a house with a red light in the window…

Classy tucker, eh? (That thing on the table in pic 2).

And I do hope to catch up with our lady friends at this year’s Mlbn Cup. I didn’t think it was a fiasco at all.

David Brown - 4 minutes ago
Jorge Gatica I am not a Baa fan but I think this is a better offer than a tree for each primary school kid. This one can crea... View
Peta Swarbrick- Canberra Progressives - 7 hours ago
Where are their policies to invest in social housing? Why not use a social housing project to boost post COVID recovery and c... View
Bill Gemmell - 9 hours ago
I will certainly look at it but am worried this proposal will lead to price inflation from suppliers and installers. View
Property 35

Melanie Wisefisherman - 14 minutes ago
Hopefully won’t be replaced by another huge apartment complex of shoebox shaped apartments destroying Canberra’s characte... View
Margaret Edwards - 7 hours ago
William Simpson, your complex is one of these. View
Peta Swarbrick- Canberra Progressives - 7 hours ago
The Labor government has failed to meet its own affordable housing targets in the last two commitment proposals because the p... View
News 22

Liz Bogue-Mahon - 2 hours ago
Or people with a disability. Some can't even afford food as many get below 500 dollars a fortnight. Everything is asset teste... View
Fandangle Nemrod - 7 hours ago
Why? Canberra did really well with the lockdown, and we are in a good position to close the roads or make them checkpoints View
Penelope Pollard - 9 hours ago
I have beautiful handmade ones that were lovingly made by my mum and sister in lockdown in Melbourne..get sewing people! View
News 30

Peter Theunissen - 6 hours ago
Sounds like lack of concern and responsibility by everyone that has wirked there. Only have 5 years to digitize 40+ year old... View
Souhair Naoum - 8 hours ago
Margaret Dudley love the idea and it can be done from home 👍... View
Emma Davis - 11 hours ago
And you are 100% correct! View
News 20

Ray Young - 9 hours ago
I remember that... it rocked us all... View
Gabriel Spacca - 10 hours ago
I’m shocked. Shocked I tell you.* *May not contain actual shockedness.... View
Russell Nankervis - 10 hours ago
I lived in Bathurst at the time but came for tertiary open day in 2010. Had to drive up the round a bout in Mitchel to get ar... View
News 5

George Watling - 18 hours ago
I doubt the folks at Arboriculture Australia are cherry pickers. The issue here is that we need to have a proportional and ra... View
Community 28

Enrolments at the ACT's 88 public schools have reached a record 50,272 students, but many schools in Tuggeranong's ageing suburbs are...
Breaking 0

One person has died following a car fire on the Kings Highway, west of Nelligen, near Batemans Bay today (3...
News 3

While the treasured Lifeline Bookfair will not be going ahead as planned because of COVID-19, there is still some good news...
Property 35

The redevelopment of Ainslie Avenue is a step closer with the ACT Government commissioning a feasibility study so it can...
News 30

Thousands of tapes and recordings from Australia's history and the national record could be lost within the next five years...
News 27

Canberra homeowners will be able to obtain interest-free loans to boost the energy efficiency of their properties under a re-elected...
Community 28

Manuel Xyrakis always wanted a cash register for Christmas and had aspirations of being an accountant. Instead, he inherited a...
News 24

Enrolments at the ACT's 88 public schools have reached a record 50,272 students, but many schools in Tuggeranong's ageing suburbs are...
News 22

@The_RiotACT @The_RiotACT
It will be bulbs in the burbs this year with a re-imagined Floriade spreading spring colour across the city. Check out the interactive map to see where they all are and plan your journey along the tulip trail come September https://t.co/bucfsQCqni (10 hours ago)

@The_RiotACT @The_RiotACT
If you missed Hummer the Giraffe's 19th birthday at the National Zoo and Aquarium over the weekend (and Mbali the meerkat's), that's OK, The RiotACT was there, and now you can get up close and personal, too https://t.co/pUGqLaudul (11 hours ago)