The Last Prom Packed Out 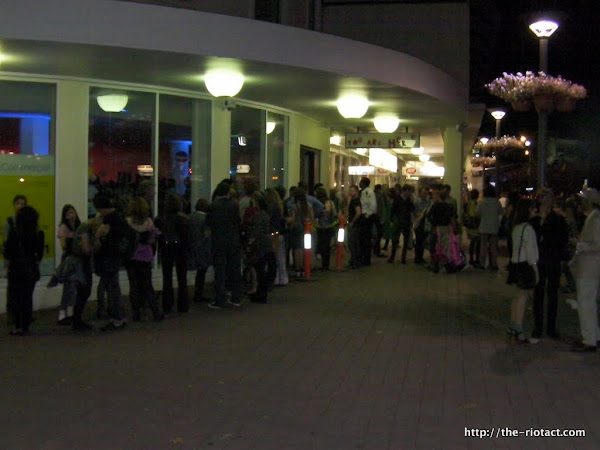 The old Dick Smith site in the heart of the Bus Interchange never looked like this before!

By 9.30 the queue to get into the superheated sauna of an impromptu live music venue was stretching around the corner.

It was The Last Prom.

Upcoming You Are Here events worth checking out include a car park party kicking off in the Melbourne Building courtyard/lane this afternoon, and tomorrow there’s a bicycle muster in the Garema Place chess pit that will be epic one way or another.

Tags the last prom You are here

Gotta add one more to this: A photo gallery from the Prom has just gone up on Faster Louder – and yeah, it’s sexy – and also a review:

The venue was the empty storefront in the Civic bus interchange, which used to house Dick Smith’s. You Are Here has aptly named the space SmithDicks and although the location is fantastic, it has a very limited crowd capacity. As a result there were no pass-outs for most of the evening and lots of people crammed into a relatively small space, causing temperatures to climb pretty rapidly.

Despite the less than comfortable conditions however, the crowd were energetic from the get-go, with tons of amazing zombie 80s prom costumes, including one person who seemed to have carved a brain out of styrofoam and simulated eating it at intervals.

Click on this hyperlink to read the full review, and if you were there, throw in your two cents. Truths? Half-truths? Filthy lies?

First photos from the Prom have appeared on the You Are Here Facebook page, and they are predictably delicious. Word up to everyone who decked themselves out like crazy people for the party – I hope none of you had the crap kicked out of you later on in the night by costumed vigilantes mistaking you for supervillains. I honestly felt at one point as if I were in a remake of The Warriors.

Anyway, thanks to everyone who came, and thanks especially for keeping it real about the venue limitations – I was terrified that the zombies and street prophets trapped in the line for 15+ minutes would lose their cool, but everyone was sweet and charming and I hope it was at least a little bit worth the wait.

If anyone’s got any more images or footage they’re willing to share, please hit us up on the You Are Here Facebook Page or our Flickr – we would be in your debt FOR EVER and credit your images all over the shop, you know?

Brent Hutch - 1 hour ago
Simon Lynch I'd suggest you need to go check your own facts first champ. Based on your thinking, the ACT should ignore fires... View
rationalobserver - 16 hours ago
3 points; No sane person would raise the topic of Defence force help in the same breath as raising the possibility of a law s... View
Simon Lynch - 2 days ago
I'd check the facts first Kerry. At the time there was no fire in ACT and yet your wonderful Administration hired the helicop... View
News 31

Karin Foxwell - 14 hours ago
Frank Valzano hear hear! As an Art Therapist working with veterans with PTSD I can only imagine how that sort of money could... View
David Stephens - 17 hours ago
But if your head is in the sand you might come a nasty gutser. Moving on has its drawbacks. View
Smackbang - 20 hours ago
What a coincidence - your opinion is also irrelevant, and yet here you are offering it. View
News 1