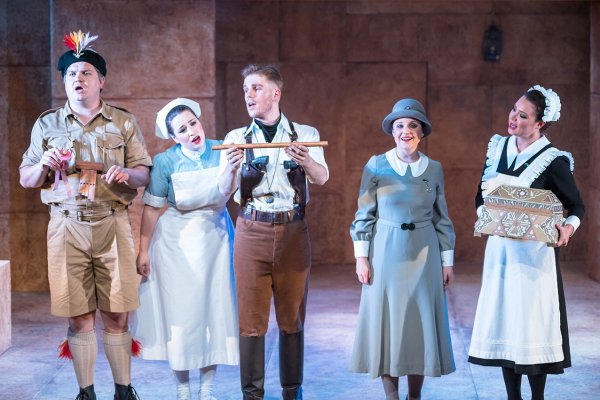 Opera Australia’s Indiana Jones-themed production of Mozart’s “The Magic Flute” swaps the forest setting for a mysterious tomb in a kid-friendly, accessible staging with amazing singing.

The most striking thing about this production is the adventure serial styling. This was a savvy design choice: this is a smallish production (regional tours are planned) but the Egyptian setting gives it a lot of character and a sense of fun. For example, at one point on his journey hero Tamino is confronted by a horde of wild animals. This can be (and often is) elaborately staged, but here the stage was peppered with stuffed animals for Tamino to quake at. It’s quirky – but it works.

Not that the setting always makes sense. At the start of the opera Tamino is unconscious and at the mercy of a vengeful mummy only to be saved by a quick-thinking soprano trio: a nurse, a secretary and a maid. Wandering around an Egyptian tomb. And then bird-watcher Papageno enters the scene. A bird-watcher. Wandering around an Egyptian tomb. A few spoken asides tried to tie the setting to the plot but the two were only ever loosely roped. Fortunately the liveliness of the period setting compensates for the occasional confusion in the plot.

Ultimately we go to the opera for the singing, and this was fantastic. The Magic Flute has some spectacular soprano numbers, in particular the giddy vocal gymnastics of the Queen of the Night (Regina Daniel), and it was thrilling to hear it performed live. Nicholas Jones was impressive as the Lantern-jawed Tamino and Andrew Moran came close to stealing the show as blokey, catastrophe-prone bird-watcher Papageno. Benjamin Rasheed was imposing (yet comic) as villainous Monostatos – but unfortunately not always completely audible.

Suitably for a production with potential to appeal to children, it was performed in English. I had mixed feelings about this. For one thing, I loved being able to understand what the characters were saying without having to read surtitles. Unfortunately what they had to say was sometimes quite banal. This is opera so it’s not unusual for a character to repeat the same line of dialogue several times in a row. At the start Tamino tells us repeatedly that he is afraid because he could die. Yes, Tamino, we can see the mummy attacking you – telling us even once was redundant. And even in English, the dialogue is not always understandable. A soprano’s delivery is so different from ordinary speech (or even what we hear in musicals) that even in English it’s a battle to understand them. Surtitles were still a bit necessary.

But in the end it doesn’t really matter – audiences know that opera is all about top-notch singing and this production delivers. The Indiana Jones vibe is mostly surface, but it’s a fun and fresh surface that is sure to get the opera a lot of attention. An excellent introduction to Mozart (or opera) that will still entertain veteran fans.

One of the few operas I like, but sadly the regional tour has finished:(https://opera.org.au/ontour/regional_tour_2014
However the King and I is still running, although you have to go to Syd or Melb to see it. Apparently it is fantastic!

Jo Fernandes - 45 minutes ago
Canberra has a special place in my heart as my home town, but the energy is too slow for my vibration. I do yearn for my kids... View
Kristy Hancock - 4 hours ago
Moved here against my will 20yrs ago as a rebel teen, took another 15 years before I truly appreciate Canberra all it has to... View
Community 38

ChrisinTurner - 3 hours ago
Spending $billions on doubling the journey time to Woden by replacing buses with trams wasn't too expensive. View
News 1

ChrisinTurner - 3 hours ago
I wonder if they will tackle the continued removal of street trees on Cooyong Street that started with the illegal Skate Park... View
Public Sector 2

TimboinOz - 3 hours ago
I do hope that some Senior Managers are required to do some of these courses AND get assessed so that those with an inbuilt /... View
Someonesmother - 3 hours ago
"the APS faces criticism that an overreliance on consultants and contractors has hollowed out its knowledge base." Gee wonder... View
Opinion 209

JC - 3 hours ago
You say that like it’s a bad thing. If you can develop land and put in lightrail mostly funded by that development then wha... View
Daniel Michael Evans - 6 hours ago
The opposition transport minister said that the train will take twice as long as the bus currently takes, if this is true tha... View
Malcolm Campbell - 7 hours ago
Doug Hearne but now you gotta build a Olympic Games in less than 10 years. Good luck View
News 33

jwinston - 4 hours ago
To the NIMBY’s on this site - The city of Canberra was built specifically for the federal government to run the rest of the... View
What's On 1

Spiral - 6 hours ago
Time and time again these types of crimes are committed by people high on drugs. Regardless of the legality of drugs please p... View
Breaking 5

MERC600 - 8 hours ago
""NSW residents are able to come into the ACT for essential work, school and study, medical and health needs, and compassiona... View
show more show less
*Results are based on activity within last 7 days

Snow is expected to again fall on the Brindabellas and the ranges on Friday (23 July) and over the weekend,...
Opinion 50

It's rare to find a restaurant or cafe where you can order a meal and get change from a $10...
News 95

Of all the NSW criminals of his generation, Crookwell-born Patrick Hudd was one of the most devious and dangerous. In...
Opinion 209

In the lead up to the Sydney 2000 Olympics, plenty was happening behind the scenes, with cities jockeying to play...
Opinion 50

A good friend of mine is moving to New York. She's spent the last six years in Tokyo and is...
Community 38

The renewable energy sceptics out there should welcome last week's announcement of the opening of the ANU's new research lab...
News 33

@The_RiotACT @The_RiotACT
It started as a hobby, but now the #Quandialla Candle Company is proving a drawcard for the small central west NSW village https://t.co/WVpyGApmfa (32 minutes ago)

@The_RiotACT @The_RiotACT
Canberra's first ever SpaceHack competition delivered some astronomical ideas, with the winning team's concept potentially having a huge impact on spacecraft and satellite technology https://t.co/ddwggkaHJW (2 hours ago)

@The_RiotACT @The_RiotACT
A new design project will pave the way for the next phase of development in Civic and hopefully help solve some long-running problems https://t.co/3fMZHLtr37 (3 hours ago)