Rounding out the hundredth video on our Canberra Music Playlist we’ve been sent in a blast from the past by The Martins with their song TAXI:

Written by Darcy Maynard
Produced by The Martins
Recorded at a shed somewhere in Queanbeyan (or was it Chisholm?) sometime around the turn of the 21st Century.

The Martins originally consisted of Darcy Maynard, Dan Senti, Ed Senti, and Steve Coulton with Jason Maynard joining soon after. The lineup changed prior to recording, when we lost our drummer in a cloud of wood splinters and profanity. Hence it was that Ed Senti departed stage left and we welcomed Jim Morgan to the stool – cos we knew he liked us better than The RUG.

Not long after recording this tune (and others) The Martins split up never to be seen or heard from again.

Here’s the full and magnificent playlist. If you’ve got a video we’ve missed email contact@the-riotact.com . 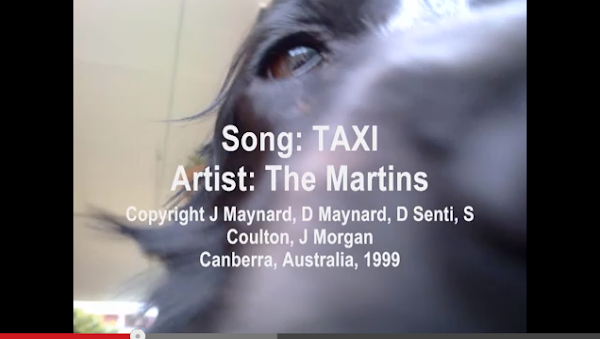 Marea Fatseas - 24 minutes ago
David Riddell the waste normally going to landfill in Mugga Lane wouldn’t be enough to meet the proposed CRS target of 300,... View
Capital Retro - 15 hours ago
Double handling makes no commercial sense but the ACT government is worried about that. It is more likely that the waste we a... View
Maya123 - 15 hours ago
I have been in Canberra since way before 2008; 1974 in my case, and I always heard Fyshwick referred to as light industrial b... View
News 45

@The_RiotACT @The_RiotACT
Black Mountain is a landmark for Canberrans but it's also a relatively intact slice of wilderness, right in the middle of the city. Naturalist Ian Fraser has co-authored a guide to the plants, animals and people of the mountain https://t.co/A8yAJToqYs (4 hours ago)

@The_RiotACT @The_RiotACT
Whether its fan dancing or respectful foraging that takes your fancy (or a live-streamed spectacular by Canberra super band Hands like Houses), the Where You Are hybrid festival has hope and happiness for everyone. Find out how you can get involved https://t.co/AdGgDR5rD9 (14 hours ago)