The Multicultural Festival gets a launch for 2012 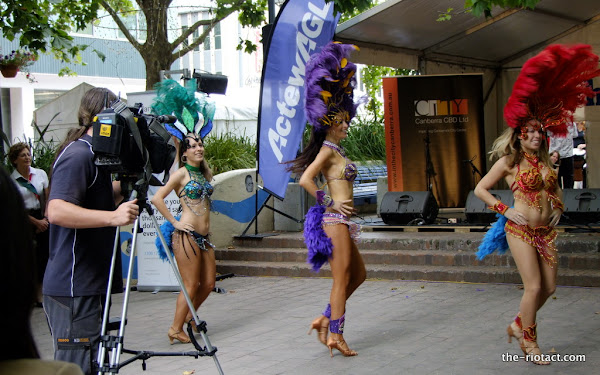 In case you’ve been living under a rock or rarely frequent Civic the 2012 National Multicultural Festival is happening this weekend.

To that end we had a media launch on Petrie Plaza this lunchtime, again bemusing passersby, but with dancers to delight.

There’s a full schedule online but the beating heart known to true Canberrans as Beer And Meat On A Stick Day (BAMOASD) is going to be on Saturday.

They have created a lot of dead-ends with their temporary fencing too. I walked all the way up towards Canberra Theatre with a stroller, only to find a fence at the end. Other people were jumping up the retaining wall, but the stroller and i had to go right back around.

And a big warning to any newbies – do not go to the food day with a stroller or lots of small kids – it is shoulder to shoulder.

The crowds will be pretty bad I think. I was wandering through Civic on Tuesday, and just the tents they’ve set up everywhere half filled the place. I do wish they’d spread them out a bit, maybe put gaps between the tents? Use more of Civic.

Just walked through Garema Place whilst on a work errand and have to say that it’s actually a bit of a hazard. Forkilfts driving around, trucks driving in/reversing, other small one man vehicles etc etc. Would fail the new OHS laws as no safe pedestrian walkways delineated. Saw a woman who was literally 10 centimetres from a forklift and did not seem to be aware at all that she was causing a potential issue. saw the driver swearing under his breath at her tho’!!

They have some metal barricades/fencing around the place but doesn’t look like it is meant to be used for pedesrian control. No signage or anything.

And the ACT gov was one of the states/territories to take up the new laws – not that it would have been permissable under the old laws.

It’s all good fun until someone gets hurt.

Why all us men wood do would be to admire them for their artistic enterprise.

I’m sorry, but you just proved you know the correct spelling of would in this context, so no excuses. Obviously you were thinking of something else to use the “wood” spelling. Off you go to the re-education camp. NOW!

We need a multicultural festival just for women.

Interestingly on the map:

They’ve set out a breastfeeding area. Somehow I don’t think any men will be welcome.

Beer And Meat On A Stick Day (BAMOASD) is going to be on Saturday.

Does that mean I will not be able to get beer and meat on a stick any other day? I was keen to go on Sunday to avoid the crowds.

We need a multicultural festival just for women.

Beer And Meat On A Stick Day (BAMOASD) is going to be on Saturday.

Does that mean I will not be able to get beer and meat on a stick any other day? I was keen to go on Sunday to avoid the crowds.

The cameraman…. No, not the ponytail dude.

Never! Pretty women disporting themselves in next to no clothes? Why all us men wood do would be to admire them for their artistic enterprise. Of course we’d be ignoring their looks, bodies, ladies parts, and sexual nature and respecting them for their personalities and intellect as people of equal worth. We’d be wondering if they’d like to take a coffee with us to discuss the writings of Sylvia Plath.

I’m still leering, but I wasn’t at the launch.

I love this festival, I think it is Canberra at its best. Civic come alive and everyone is happy

One item that might be of interest to festivallers or just motorists in the area: Akuna Street will be blocked off for the first time this year for the duration. Actually, the road closure will kick in some time early Friday morning.

Jack Wiles - 1 minute ago
It's not the type of meeting place depicted by so many comments; it's not somewhere you would take young family but is a plac... View
News 15