The NMA snares the Junius Cup! 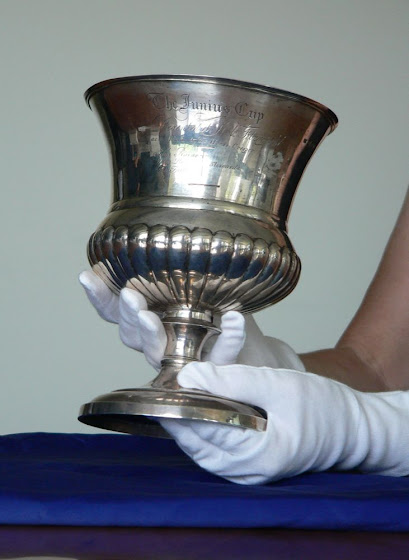 The National Museum has snagged a nice piece of loot with the acquisition of the Junius Cup:

One of Australia’s earliest sporting trophies has been added to the collection of the National Museum of Australia.

The Junius Cup, a handsome silver trophy awarded at the Parramatta races in October 1827, was commissioned by Andrew Nash, a convict turned entrepreneur, and made in Sydney by silversmith Alexander Dick. It was awarded to Robert Fitzgerald, whose horse ‘Creeper’ won the race.

The National Museum of Australia acquired the Junius Cup at auction for $161,000, including the auction house commission of $23,000.

The cup will go on display next year as part of the upcoming Landmarks gallery.

One Response to The NMA snares the Junius Cup!
Filter
Showing only Website comments

This was sold by Raffan Kelaher and Thomas auctioneers in Sydney. Check out their website for more info on the cup – http://www.rkta.com.au – they have a link there all about the Cup’s hisotry. Realy interesting – I think the cup is the first ever cup for any horse race ever in Australia.

Alex Dee - 34 minutes ago
It’s not, it’s only the noisy minority that are having a whinge about Canberra drivers.... View
Belinda Maiden - 43 minutes ago
I’m new to Canberra and have been surprised to find that: * P-platers seem to be allowed to drive at twice the posted speed... View
Alex Kearns - 51 minutes ago
More presence might send a deterrent message. The current on road presence is minimal so the deterrent effect is minimal. The... View
Breaking 7

John Moulis - 37 minutes ago
Thank you to those people who have responded to my initial post. Since airing my experiences here and on Facebook it is clear... View
I am a Rabbit™ - 9 hours ago
The problem with the approach of the federal government was they were trying to reach a middle ground between not pissing off... View
chewy14 - 11 hours ago
You're assuming what he's saying is correct though. Whilst they do have controls to prevent vaccine "shopping" for people not... View
Property 23

Marty Hoenig - 56 minutes ago
They have to drink beer in CF because they sure can't drink the water! View
Mick Gaffey - 10 hours ago
Just buy it already Jason Barton ✅ View
Amanda Sanderson - 14 hours ago
I’ll give you bottomless gin and tonics Peter Taylor 🤣 View
Property 14

Jason Hutty - 9 hours ago
Tim Van Der Vlist I'm not sure if you understand the economics of a member's club. The members own it. So yes, of course they... View
John Sands - 11 hours ago
John Ryan Steve Boege just means you should go to 19th hole and think about how you would have played... View
Fiona Wright - 12 hours ago
Irene Kelly greenkeepers made a mistake on the greens (in the article).. View
News 22