The observatory cooks off 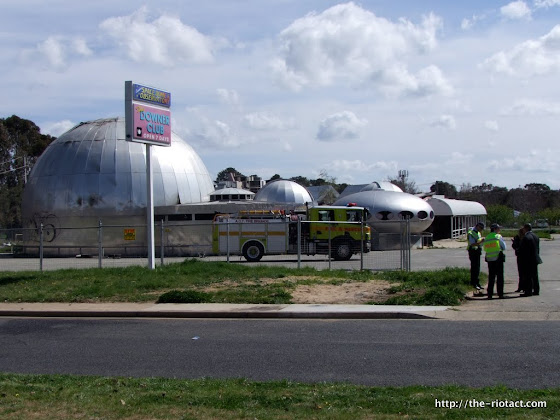 The dereliction of the beautiful observatory buildings in the old Downer Club has long been a tragedy. This morning it burned as recorded in these postings from the ESA:

5:33am Monday 27 September 2010 – Fire in Dickson The ACT Fire Brigade is responding to a fire inside an old observatory building in Haldon Place Dickson.

A large amount of smoke is being produced by the fire which is spreading over part of Dickson.

Residents are advised to keep their windows and doors closed at this time.

[Slideshow of the scene at midday below, and the intriguing police reaction] —

Firefighters are continuing to extinguished the fire.

A large amount of smoke is still coming from the building.

A search of the observatory building has confirmed no one inside.

7:53am Monday 27 September 2010 – Update four – Fire now being mopped up Firefighters have extinguished the main seat of fire with mopping up expected to continue for a few hours.

The smoke has now largely dissipated.

The cause will be examined by fire investigators and ACT Policing forensic officers but it is believed to be suspicious.

UPDATE: ACT Policing have had this to say:

ACT Policing is seeking witnesses to a fire that occurred at the old Canberra Space Dome (Planetarium) and Observatory in Dickson early this morning (Monday September 27).

Police were called to the dome shaped building around 5.30am today in response to a report of a fire at the location. The fire was extinguished by ACT Fire Brigade.

At this stage, the extent of damage to the building is unknown. The building has been vacated for a few years and was not in operation at the time of the fire.

As the building has been deemed not structurally sound AFP Forensic Services are unable to enter and conduct an examination.

Police are urging anyone who may have any information on the cause of the fire or who saw anyone in the area around the time of the fire to contact Crime Stoppers on 1800 333 000 or provide information via the website www.act.crimestoppers.com.au. Information can be provided anonymously.

So if you let the building get bad enough it can’t be investigated?

I wasn’t in Canberra when it was alive. What was it like?

Still smoldering at 4:30pm too… The Police backed their car up to keep an eye on us when we walked past.

Welcome to the Riot mistertim

I took some very similar photos at about 10:30am yesterday. I was at the fence at the front with my camera and one of the cops asked me to move to the other side of the road to take photos because it was a crime scene.

Also, the hole in the side fence that can be seen in one of the photos had been very crudely covered when we walked past again at around 4:30pm yesterday.

Suspicious yes. Sorry to see the thing go… not so much.

Closed down by the owners + prime real estate + fire = conspiracy.

Conspiracy + no investigation = a conspiracy of conspiracies.

Well there’s no barrier to redevelopment now as the entire club is a smouldering ruin.

I never understood why they were so determined to run the Downer Club into the ground. Surely a hip, profitable geek-fest suits us all? It used to be so romantic going out to the observatory on a date. I probably would even have had dinner and drinks there if it wasn’t such a creepy dive.

Very sad. What a shame they couldn’t find the money to move it as discussed on Stateline.
http://www.abc.net.au/stateline/act/content/2006/s2421674.htm

What a tragedy. Also a tragedy that the Tradies decided to get rid of the coolest collection of bikes in the country and sell them off. Not to mention their trams.

@54-11: quite so. Either that or they’re suddenly deemed unsafe due to asbestos.

It’s funny how often buildings on sites due for redevelopment seem to mysteriously burn down. Perhaps it’s because they are derelict, but just perhaps it can speed up the approval process as there is no longer anything, such as heritage or community concern, to inhibit the redevelopment.

I wonder who now owns this site, or who has a major stake in the redevelopment proposal? 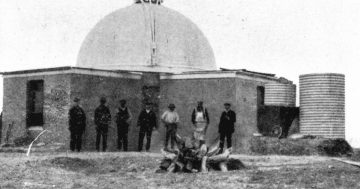