The pollen rising from the pines 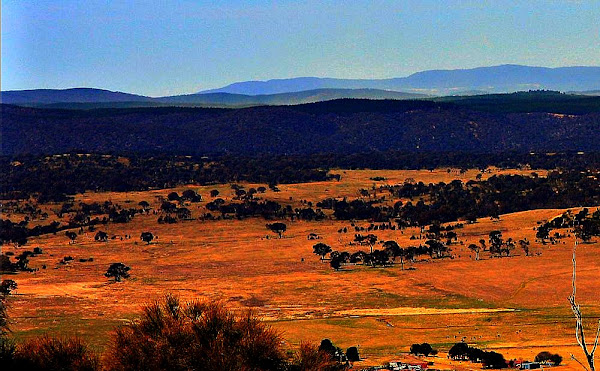 Another John has sent in a picture of the pollen cloud rising from the pine plantations.

Today I was up on Mt Ainslie and looking to the east and a strange sort of haze caught my eye, a yellowy sort of dust cloud not normally seen, then it occurred to me that it was almost certainly clouds of pollen being generated by the pine forests of the Kowen pine plantation, and the strong westerly that sprang up today was the catalyst. The clear air and distance from my viewpoint combined to make the very tenuous clouds quite visible.

It’s always difficult to capture something like this photographically, the camera only gives a mediocre representation of what the eye actually sees, but even so I think you can see waht looks like a dust plume over the pine trees. There was a similar but extremely faint effect over the Mt Majura pine trees but much much less obvious and impossible to capture with the camera.

The above image has been pretty brutally tweaked by me to bring the pollen out.

Below is the original: 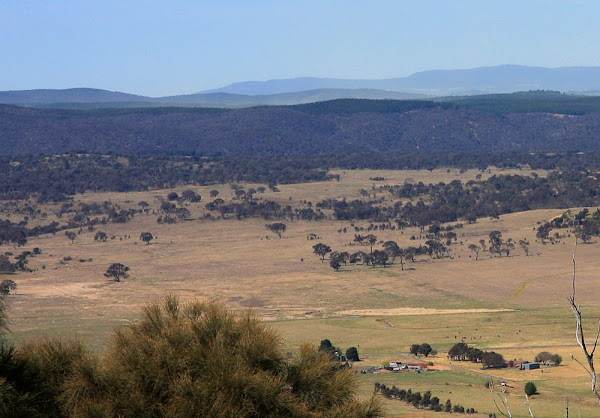 Now that is cool!

I was out riding in Kowen & Sparrow last wednesday & all the tracks were covered in it. The sidewalls of my tyres now have a yellow tinge as a result.

Sharon Fuller - 38 minutes ago
He would the idiot View
Matthew Soall - 1 hour ago
Jim Hosie I was RFS mate, RFS can do hazard reduction as required without government approval. This year we had a very little... View
John McAvoy - 3 hours ago
thoroughly debunked only by the greens party. The rest of us are well aware of the changes to the environmental act. Which we... View
Opinion 24

Christine Mary - 1 hour ago
Cheryl Hingston look it up. View
Cheryl Hingston - 2 hours ago
Christine Mary ...what do they remove to put up hectares of solar panels and what happens to the panels when they wear out...... View
Scatty Anthony - 3 hours ago
By going broke first they will be... broke first...!! its NOT Carbon, thats black stuff, its Carbon Dioxide, which is plant f... View
News 43

John Kerry Tozer - 2 hours ago
Aldith Graves - Done! View
Michael Mick Smith - 3 hours ago
This ACT Government has no idea how to govern, yet you people still vote for them, who is the bigger idiot. View
Lyndon Ogrady - 3 hours ago
Haha we decided to sell our investment property for these exact reasons. One less available for rent View
News 32

Bente Hart - 5 hours ago
Susan Nicholls 1kg sugar to 2L water heat gently until sugar is dissolved. Cool down. Poor into shallow tray with straw or th... View
Capital Retro - 11 hours ago
There are definitely more bees than flowers in my garden this season. I think the urban situation will improve but it's prett... View
Susan Nicholls - 12 hours ago
Bente Hart How do you make sugar water? View
Community 39

Caul Fer - 7 hours ago
Tarian Dixon no View
Shannon Lister - 12 hours ago
Michelle Brown your famous. View
Annabel Dobson - 12 hours ago
That’s simply not true. You can see very clearly the damage Brumbies are causing when you ride through KNP. We know scienti... View
Business 6

Malcolmo Oz - 12 hours ago
Trudy Jane Even worse Jane (and Betty) - many have never even come here!! View
Trudy Jane - 20 hours ago
Betty Starbux most people who criticise Canberra have never even lived there View
show more show less
*Results are based on activity within last 7 days

@The_RiotACT @The_RiotACT
Half the platypus population at Tidbinbilla Nature Reserve have had to be rescued from their disappearing ponds as the drought takes its toll on the ACT's popular animal sanctuary https://t.co/fM8dOWPGIV (35 minutes ago)