The Preacher loses his appeal 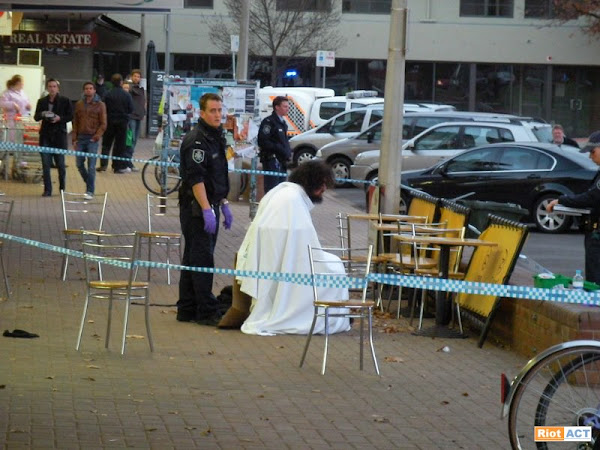 The Court of Appeal has announced its rejection of stabby Ainslie street preacher Isa Islam’s appeal against his nine year sentence for making Andrew Dyer a tetraplegic at the Ainslie shops back in 2009.

We’ve covered this story before.

At issue was just how mentally unwell Mr Islam was when he commenced the frenzed stabbing that only ended when his knife broke.

Justices Refshauge, Burns and Marshall have rejected the appeal, as well as efforts by the DPP to increase the sentence.

[Photo taken by your correnspondent shortly after the attack]

Lesa Schuster - 49 minutes ago
The housing prices need to come down, it’s very hard for many people........it’s pretty city though and does not feel lik... View
Acton - 3 hours ago
The Canberra lifestyle is fresh air, trees, birds, roos, mountain views, bush and lake walks, good roads, bike paths, kids, p... View
Jeff Smith - 5 hours ago
I think we are both concerned about the same bigger problems and to some degree on the same page. I certainly never want to s... View
Opinion 81

Lucy Jane - 2 hours ago
4 day week for everyone but everyone gets a different day off. Will help immensely with traffic congestion and has been trial... View
Ronnie Adams - 6 hours ago
Helicopter 🚁 View
Julie Macklin - 1 day ago
I cycled and rarely had to face the parking problems people complained about. When it rained I took the bus, even though I ha... View
Community 15

Malcolm Roxburgh - 6 hours ago
The government has to release more land not make it easier to raid your super. This only makes for more cashed up buyers and... View
assiduous - 16 hours ago
Low lending standards and inflated bonuses for originating mortgages based on ever rising values are core features of our ban... View
Pradeep Bishwakarma - 16 hours ago
Crazy market Shiva Sapkota! Only the RBA Can fix this View
News 1

@The_RiotACT @The_RiotACT
With access to industry, research and retail, a new Poplars Innovation Precinct deal is set to open opportunities for @UniCanberra students https://t.co/aRsFLTnv3Q (32 minutes ago)