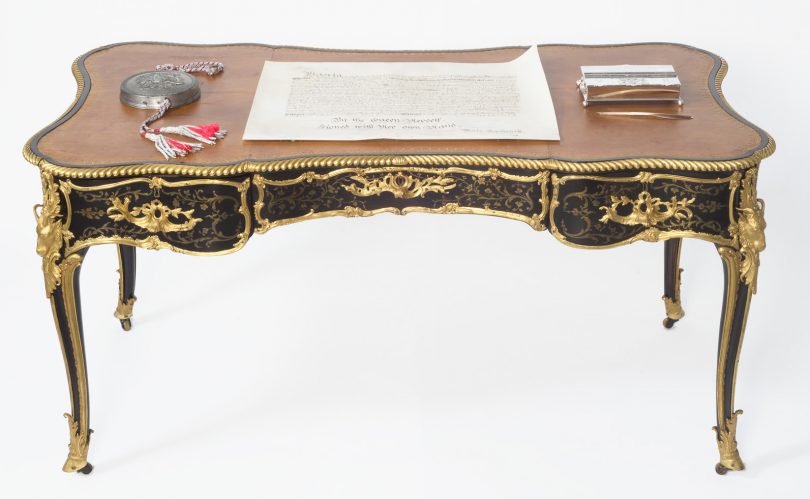 The table used by Queen Victoria when signing the Royal Assent to the Australian Commonwealth in 1900. Photo: APH.

Located within a dimly lit display cabinet in Parliament House — beneath the watchful gaze of portraits of former prime ministers — stands a table, a quill and an inkstand. Together with one of our nation’s most vital documents, they tell an extraordinary story.

The story begins in the late 1800s when moves were afoot for our country’s colonies to federate. At that time, the six colonies acted as six different countries. They had their own laws and defence forces. They each boasted their own railways and train line gauges. They taxed goods brought in from other colonies and even created their own postage stamps. Travel and trade between the colonies was complicated.

A national system for many such government responsibilities seemed a sensible idea, especially when it came to immigration, defence and trade. After years of discussion, argument, division, opposition and tireless campaigning by those in favour of federation, by 1900, each colony had voted to agree to the constitution for a new federated nation. All that was needed was to convince the British Parliament and, finally, Queen Victoria. No pressure!

In March 1900, a delegation set off to England to do just that. Headed by Edmund Barton, with Alfred Deakin, James Dickson, Charles Cameron Kingston and Philip Fysh, the group represented five of the six colonies. (Western Australia completed the complement later that year.)

A quirky little fact during this time was that, when a positive result to the delegation’s efforts was finally in sight, the men asked for a little time out. They headed to a room nearby, closed the door, held hands and ‘danced a little jig’. What huge excitement they must have felt.

The next step was for Queen Victoria to sign the Royal Commission of Assent (also referred to as Australia’s birth certificate), which she did on 9 July 1900. 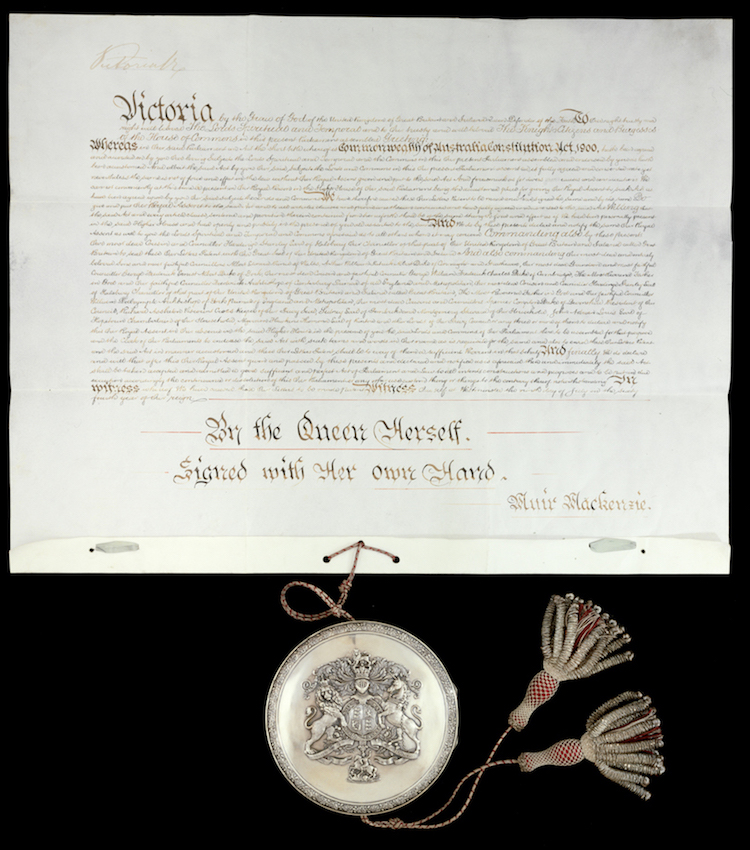 The Commission of Assent signed by Queen Victoria in 1900 – regarded as Australia’s birth certificate. Photo: National Archives of Australia (11371450).

What we see today in Parliament House, 121 years later, is the result of that day. A facsimile of the document is meticulously reproduced on vellum, a parchment made from calfskin. The original is so precious it is kept under strict preservation conditions a stone’s throw away at the National Archives. Iron gall ink used to sign official documents at that time was typically corrosive, faded over time and caused flaking. Evidence of this can be seen in Queen Victoria’s signature on the original.

READ ALSO Hot in the City: Formulab cakes are what sweet dreams are made of

On display with the document and its attached skippet (a round silver case containing the Royal Seal) is the very quill that Queen Victoria used. With this is the inkstand, an ornate silver casket with four lidded compartments holding corrosive iron gall ink.

After signing the document on that notable day, Queen Victoria presented Edmund Barton with the very table she had used — the first gift to the people of Australia. Considered one of the finest pieces of furniture in Windsor Castle, its design features one of Queen Victoria’s favourite animals — the goat. The goat’s head is incorporated in the brass work at each corner, and the goat’s hoof forms part of the foot of each leg. Made of English oak in the French style of Louis XV, the table is veneered in brass and ebony with gilded brass decoration and a Moroccan leather top. What a privilege to accept this on behalf of the Australian people. Queen Victoria’s table was used at the Commonwealth Inauguration Ceremony in Centennial Park, in Sydney in 1901. Photo: National Archives of Australia (11404539).

The table was used on 1 January 1901 at the Commonwealth Inauguration Ceremony in Centennial Park, in Sydney. Today, it is used during royal visits, most recently when Prince William and the Duchess of Cambridge signed the Parliament House visitors book in 2014.

These mementoes that sit quietly on display remind us of the hard work, passion and commitment that went into creating our nation. That’s certainly worth a jig or two.