The schools that will get supervisors to patrol crossings in 2018 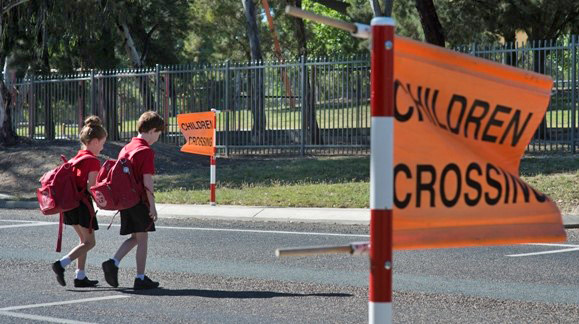 20 school crossings in Canberra will be supervised next year under a pilot program. Photo: Transport Canberra.

Supervisors will, for the first time, monitor school crossings at 20 sites across Canberra under a pilot program to increase safety and encourage more children to ride or walk to and from school.

Minister for Transport and City Services Meegan Fitzharris said that schools from all sectors and regions across the ACT would benefit from the program, to begin in Term 1 of 2018.

The crossing supervisors will assist children to cross roads safely by directing traffic with a stop sign and providing instructions to pedestrians, as well as helping to improve traffic flow around some of the busiest crossings.

She said the program, which was an election promise, would benefit 23 schools, as some sites include more than one school. These included Government, Catholic and Independent schools, with at least one school from each Canberra region involved, as well as one special needs school, Malkara School.

Ms Fitzharris said walking or riding to school each day was a simple but effective way for children to get active and be healthier. It also helped reduce congestion around schools with fewer cars competing at the school drop-off and pick up.

“Feedback received through other school programs indicates children want to walk or ride to school, but parents are often reluctant because of safety concerns. I really believe this program will help to alleviate these concerns and make it easier for more children to the walk to school,” Ms Fitzharris said.

The program focuses on crossings used by infant, primary school or special needs children. Information on pedestrian and traffic volumes was collected at all eligible crossings and the data formed a key part of the selection process.

An independent selection committee comprising key stakeholders from government and each of the school sectors finalised the list of schools to include in the pilot.

The ACT Council of Parents and Citizens Associations welcomed the program, which it said followed years of concern from parents about the safety of students on their school crossings.

Executive Officer Terry Sanders said the program, along with the election promise of Traffic Management plans for every public school, would give parents more confidence in the safety of school roads and crossings and hopefully lead to more students walking to school.

“Fears around Lyneham Primary’s school crossing, probably the busiest in Canberra, were raised by parents through their school P&C and then brought to Council. We were able to present a detailed proposal for a trial of crossing supervisors to the Minister for Education two years ago,” Mr Sanders said.

“Leading up to the election last year, the Council worked hard to raise the need for safer crossings and we were extremely pleased when ACT Labor committed to this trial program as an election promise.”

For a full list of participating schools and more information go here.

Do you think this new initiative will solve the issue of school parking and reduce traffic on the roads? Share your thoughts by commenting below.

Louise Flint - 28 minutes ago
James Daniels I was sent there for advice before I took a redundancy package. They ignored my superannuation and taxation que... View
Patrick Barrett - 4 hours ago
Dylan your fault View
Sonia Irwin - 8 hours ago
Been watching this as a client. Gotta say a bit nervous is an understatement View
News 22