Experts in buying, selling & renting
Your property, your future
8 October 2019 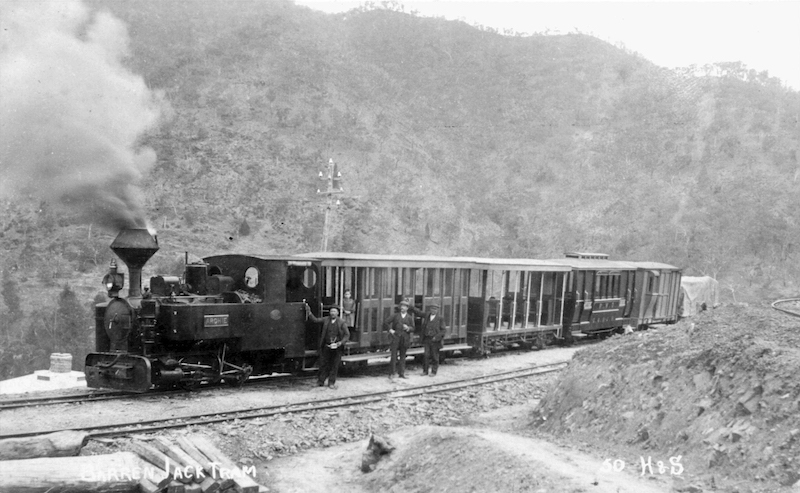 ‘Archie’, one of the four small steam locomotives that carried materials, supplies and passengers between Goondah, on the Southern Line and Burrinjuck City. Photos: Yass and District Historical Society Inc.

No one knew the young bank clerk newly arrived in Yass in 1898 was a genius. They could not have suspected he would become famous and make their town his own.

Three months after the bank transferred Alfred Shearsby from Yass to Wentworth, Shearsby was back of his own accord. Now his life is celebrated in a book, a street in Yass carries his name and local people like historian Cheryl Mongan speculate whether it was the unusual fossils in Yass that lured him back, or a young woman, Ethel Chambers, who later became his wife. 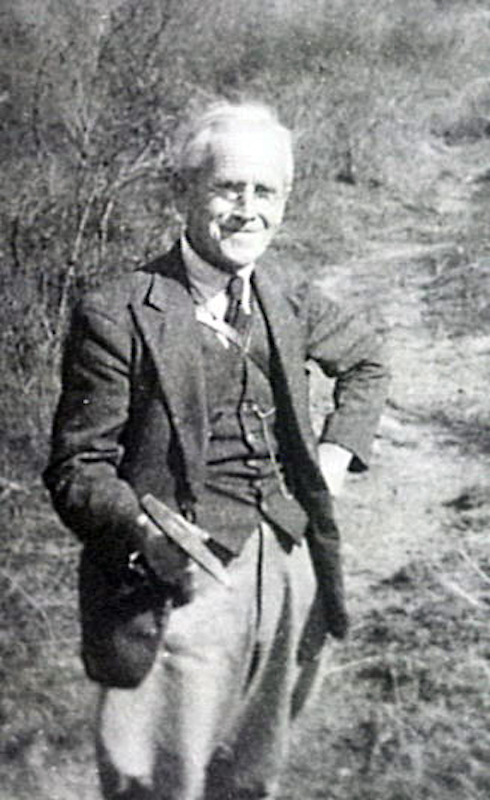 Except for photography, his interests were unlike anyone else’s in Yass. His study and pastimes set him apart from the mainstream interests of Yass.

Ms Mongan recalls that for all his talent, Shearsby lived modestly. Always dressed in shirt, collar, tie, vest and jacket, he led university students on fossil-hunting expeditions around the Yass countryside and worked alongside renowned academics including the famous geologist Professor Edgeworth David.

Over time he compiled an extraordinary photographic collection, including more than 400 photographs of soldiers going to World War I.

As workmen cut into Barren Jack and Black Andrew mountains on either side of the Murrumbidgee River near Yass, to begin work on NSW’s first major irrigation dam, Shearsby was nearby. His camera was often focussed on ‘Archie’, one of the small steam engines that carried goods and passengers to ‘Burrinjuck City’ during the dam’s construction. Less than 60 kilometres from Yass, the dam was built in the shadow of Barren Jack, the mountain known by local indigenous people as Booren Yiack. Its name was changed to Burrinjuck in early 1907 when work began. From 1907 to 1950 Shearsby took more than 500 photographs. 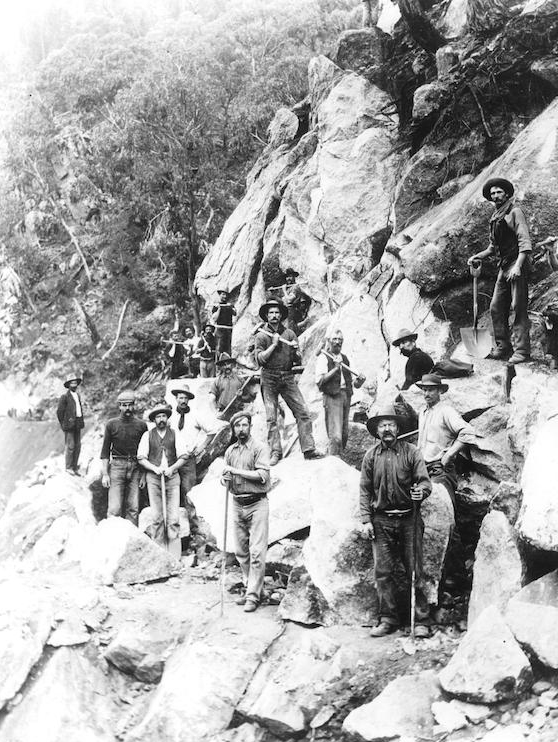 Labourers working on the railway cutting on the Goondah-Burrinjuck narrow gauge railway about 1907.

Now the Yass and District Historical Society will celebrate his life in its latest exhibition A J Shearsby, Renaissance Man of Yass.

Dr Mathew Trinca, director of the National Museum of Australia, will open the exhibition on Friday, 11 October. It will include a meticulously constructed working model of Archie which took over 600 hours to complete.

“We think he was commissioned to photograph Burrinjuck Dam as it was being constructed,” said Ms Mongan, president of the historical society. 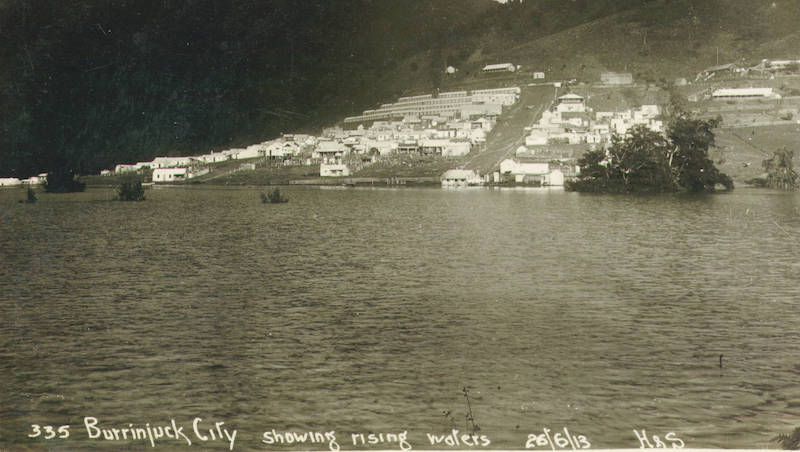 The settlement near rising waters of Burrinjuck Dam.

“Most of the photos are about the structure of the dam, but there are these wonderful things like Archie and workmen on the cuttings. He also photographed flying foxes that transported people around. The collection shows the evolution of the settlement of Burrinjuck; of course, it disappears under the water as the dam rises.”

Ms Mongan said Shearsby’s photos were only a part of his story. He was into astronomy and photographed eclipses, he designed first aid envelopes and stamps which are now collectors’ items and compiled tourist guides. For a Yass garage, he drew up some of the first maps for tourists going to Canberra. Shearsby made his own pathology specimens from Yass hospital and collected fossils, which he placed in the Mechanics Institute, at the time a learning institute. It was there he gave lectures on astronomy and geology using lantern slides which he made himself.

Shearsby’s geological and paleontological skills were highly regarded by academia and he frequently collaborated with university professionals.

To make a living he teamed up with another photographer in town, provided holiday relief for the secretary of the Pastures Protection Board, collected money for the hospital and audited the books for Hotel Canberra.

The exhibition will be open to the public from Saturday, 12 October at the Yass and District Museum, 247A Comur Street, Yass from 10:00 am to 4:00 pm. 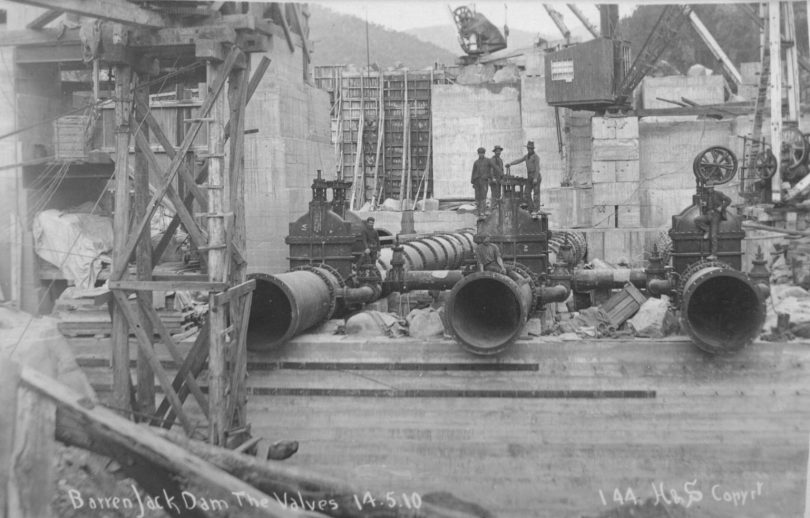 The valves at the base of the dam, most likely used to regulate the flow of water. 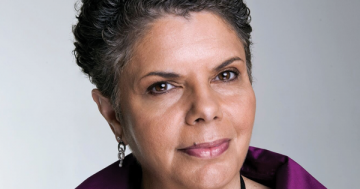