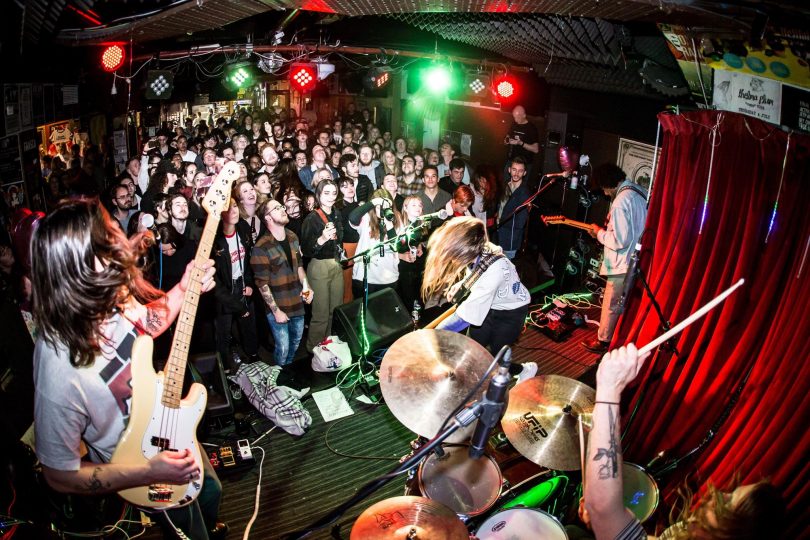 I hate musicals. They cost too much, they’re way too earnest and, for the most part, you’re sitting in the dark in silence.

Mosh pits, on the other hand, are ridden with sweat, filth, beer and self-loathing. Absolutely divine.

And with gigs now being reimagined as sitdown shows in a bid to keep the live music industry COVID-safe, I’m worried that this is what live music will soon become – sit-down affairs with polite clapping and the occasional call of “encore, encore”.

This is why the charisma and stage presence of musicians is now more important than ever. It has always been something local and emerging musicians have needed to make a gig truly great with no large crowds to hide behind.

And Canberra’s bubble is bursting with it.

Sputnik Sweetheart’s recent headline gig at ANU was complete with a theatre stage at some 65 per cent capacity. It felt more like a movie theatre than a concert.

You couldn’t stand and dance, just bop along in your seat like an awkward teenager at their first boy-girl school dance (although this didn’t stop one enthusiastic punter who managed to land her bra on stage during Sputnik’s set).

Although it seems odd to me that Canberrans can dance and invade a stranger’s personal space at venues like Mooseheads and the line outside Mooseheads, but if you put a live band next to them, it’s suddenly not allowed.

But with COVID restrictions in place for the “foreseeable future”, it’s just something that we have to live with.

To their credit, though, Canberra locals ARCHIE and Sputnik managed to caress the crowd and counterbalance the dopamine loss usually obtained by the mob mentality of a mosh.

A few months ago, Gingernuts at The Basement was able to pull off a similar feat. Despite the crowd being forced to listen to rock bands like they were watching an open-mic night at the pub, the band was about to espouse enough chat to keep the atmosphere lively.

It is why I can definitely recommend Canberrans get up off the couch and support live music.

This might not be completely terrible if it forces musicians to reengage with the audience and make gigs more than just sweat, filth, beer and self-loathing ridden moshpits.

Plus, perhaps the new format isn’t all bad for those of us on the shorter side of six foot.