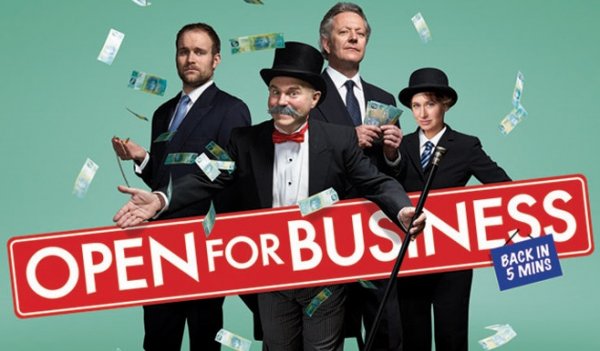 Two weary travelers stop at an inn. This is the “Canberra-berry Tales”, and these pilgrims to the nation’s capital are passing the time until daybreak by sharing their stories. Here the Miner and the Banker share the less-than-spiritual aims that have inspired their trek. Canberra, as the theme of this year’s Wharf Revue tells us, is “Open For Business”.

While the miner and the banker may have earthy designs on Canberra, long-time revue director (and performer) Jonathan Biggins describes the ACT as the Sydney-based revue’s spiritual home. It’s easy to see why: Canberra provides most of their material. So we have Blinky Bill Shorten trying to save the Labor branches and grass roots; Christopher Pyne at bedtime saying his prayers and invoking God’s wrath on his enemies; Clive Palmer giving his party a pep talk on dealing with the media; and a hilarious insight into Scott Morrison’s conjugal relations.

Impressively the material is all topical with Paul Keating and Bob Brown only making the cut because they refuse to leave the public stage. Keating is joined by Julia Gillard in a musical tap dance where they crow about the current state of politics and boast, “don’t you miss us now.” Meanwhile Bob Brown visits Greens Party Headquarters to do a sexy dance about getting the environment back on the agenda. And yes it’s worth the ticket price just to see sexy dancing Bob Brown.

My favourite sketch however was an insight into the inner workings of the Daily Telegraph (done in the style of the classic movie “The Front Page”) with the Telegraph journalists reimagined as hard-nosed 30s muckrakers. Sultry siren Miranda Devine lounges on the piano while a dashing, Cary Grant-esque Andrew Bolt bursts in with his latest scoop about racism. Rupert Murdoch (looking and sounding more than a little Montgomery Burns) chimes in on a new-fangled video screen with Machiavellian but senile orders before being interrupted by one of his regular heart attacks.

The charm of the show is in its gleeful caricature of political personalities. Some are delicately observed (the interpretations of Paul Keating and Julia Gillard are truer than life) but others, like Clive Palmer, get the broad treatment: Clive is bundled up in a massive fat suit. I particularly liked the interpretation of George Brandis as a man of taste, education and polish who sings eloquently about everyone’s right to be a c*nt. Phillip Scott, Jonathan Biggins, Amanda Bishop and Doug Hansell all play multiple roles and display immense talent for comedy and impersonation. Amanda Bishop deserves a special mention for playing every female character in the show (except of course the other Bishop from Canberra) and making each new role distinctive. Wharf Revue newcomer Doug Hansell fit right in with his excellent comic timing but also delighted the audience with his amazing singing.

It’s easy to see why the Wharf Revue has become an annual institution: the caricatures are funny without being savage and all sides of politics get the same treatment. Canberra also provides the ideal audience for jokes about parliament and policy. My only real complaint is that the comedy could be gentle even when the topic explored begged for brutal satire, although for the audience at the opening night it was all perfectly pitched. If you live in Canberra and you follow politics you’ve probably already seen this group perform, while if you haven’t you should experience it to see whether you will join the legion of local fans.

Saw this. Really great. Will definitely be there next year. I thought the PUP skit was spot on.

Lin Van Oevelen - 31 minutes ago
I am still looking for a great pad thai on the Northside. One of those simple dishes that requires real skill to get right, I... View
Salima Haidary - 2 hours ago
Kinn Thai used to be good, sadly no more 😭 View
Elise Quodling - 5 hours ago
David Gray research? 😉 View
Opinion 53

Zakzook Chico - 16 hours ago
Patrick J Pentony couldn’t agree more View
William Coats - 17 hours ago
So after 20 years this Labor Greens Government is ready to promise action. I guess we will have to wait and see. View
Patrick J Pentony - 17 hours ago
Rheyce Spears we are at the start of the twentieth year of labor greens gov in the ACT. Not sure you can really blame anyone... View
Opinion 3

@The_RiotACT @The_RiotACT
After a tough few weeks for the team at Mogo Wildlife Park, the surprise delivery of a leggy new addition was a treat for visitors & staff https://t.co/Pc3ECJmQgp (60 minutes ago)