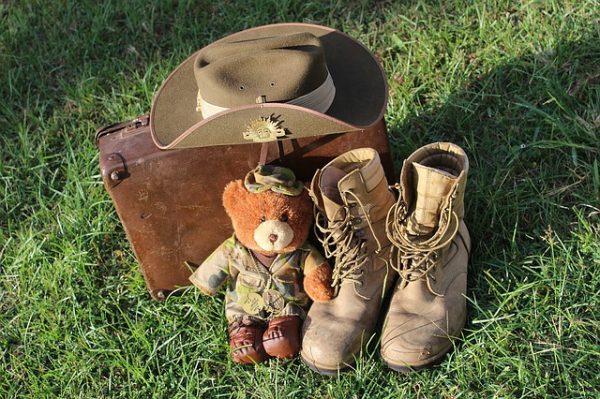 If you have teenaged children, and especially a 14-year-old, can you even begin to imagine losing him/her to war? The very thought of such a young life lost and wasted in such a tragic way sends shivers up my spine.

The book, “Soldier Boy”, is an engaging tale told about what we believe to be the youngest known ANZAC. It captures the essence of 14-year-old Jim Martin’s story. This book has sold millions of copies and what’s more, it was written by one of our most treasured, local historical novelists, Anthony Hill. Today is a good day to recall the messages conveyed by this story. Not only is it an interesting exercise to find out more about this young boy’s experience of war, but also to be reminded in these uncertain times, of the tragic cost of war and why we should try to avoid it from ever happening again.

Not only must we do a “soft-shoe shuffle” between remembering (and being eternally grateful for) those who sacrificed their lives for us, so that we may live in such freedom enjoyed by so few in the world today, but at the same time, there exists the precarious line of not only the glorification but also the “glamification” of war, as well as the objectification of those who fought for us.

The circumstances of writing Soldier Boy are interesting in themselves, and you can read about the process in full here on Anthony’s website. Curious symmetries and discoveries peppered Anthony’s journey of writing this story and resulted in what is now, a best seller for him.

We can be proud Canberrans to have such a gifted author living and working here among us. By the way, you can meet and talk with Anthony at the Old Bus Depot markets. He sells his books there, and it’s a rare opportunity to get a signed copy and a chat with this seasoned author. Take your teenagers along.

The story of the soldier boy, Jim Martin, took place around the excitement of the war breaking out, which had the people following events unfolding in Europe with patriotic interest. Propaganda was powerful and to the impressionable young boy, it was a call to do his duty and not miss out on the “adventure” of joining the war effort. After he attended (with his dad) a great military parade in Melbourne by 5000 troops, where men from all around the country had signed up, he was overwhelmed with excitement (and he wasn’t alone).

Jim’s excitement that night after the parade, evident around the kitchen table, as the discussions revolved around signing up. Even his father, Charlie, wanted to enlist, but at 43 he was too old, according to his Mum, Amelia. They also had a boarding house to run and a family to feed, and so, the young Martin was keen to go in his dad’s place. His parents initially refused permission for him to go and sign up (understandably), because he was only 14 at the time, but he threatened his mum that if they signed the papers he would keep in touch, but if they refused, he would sign up under another name and they would never see or hear from him again.

His mum was between a rock and a hard place, but she eventually gave in and signed the papers, in which Jim had lied about his age and said he was 18. The adventure began – but Jim was to find a different reception to what he had been expecting once he got there.

So, the tragedy unfolded and I won’t put a spoiler with all the details in here, particularly surrounding his terrible fate, except to say that Amelia and Charlie never did see their son again.

Anthony mentioned his motivation in writing this story in 2001. He had been keen to write something which would touch young people and give them an inkling of the realities of war. He recalled a teenage girl writing to him to say that she had thought that war would be more exciting, and hadn’t realised until she read Jim’s story, just how horrid it could be. That, for Anthony, made it all worthwhile.

He has gone on to write about the animals of war amongst other war stories for the Young Adult market, and nowadays he is writing for adults. Even Soldier Boy is getting a lot of (adult) media attention around the nation. He tells me that sales of this latest edition are in the six figures, according to his latest information.

Yes, on this ANZAC day, of course, we must learn from our past and not forget the tragic loss through war, but we must also remind ourselves that we want to keep our younger generations home for a bright future and not sacrifice them as we have done in the past.

Bronwyn Tolley - 4 hours ago
Karin Hagel Prince Phillip at Buckingham Palace, July 20th 1969. The day man landed on the moon ! View
Tig Beswick - 6 hours ago
Robyn Lynette Pierce - when I was a little girl, I went to the NSW Governor General’s house because my dad had been invited... View
Karin Hagel - 7 hours ago
Kylie Chance - if you read the article they say he has info on where to find a Hemsworth. Jugiong isn't far away... could sti... View
Business 36

Áine Ní Tighearnaigh - 8 hours ago
Its good to draw attention to the poor maintenance practices of big bureaucratic systems running housing. I can provide accur... View
What's On 9

Louise Saber - 8 hours ago
Meg McLoughlin next time you are heading to Willinga Park let me know! View
Opinion 42

Aaron Still - 8 hours ago
Rob Thomas clever way of putting it 👍 View
Gem Gemm - 10 hours ago
I am so utterly dumbfounded that people are upset over this? Like water is wet. It's absolutely a micro aggression and subtle... View
Kooms Sam - 11 hours ago
Hayley Marie Rianna Tatarelli hahah r u thinking what I'm thinking B1? View
Opinion 66

Shaun Cummins - 10 hours ago
Even a bee is noisy! View
lakefly - 12 hours ago
Rather than expansion, it should be shut down. These drones are not quiet at all. What real benefit do they really bring. Why... View
Daniel Oyston - 12 hours ago
Cue outrage ... View
News 2

Not The Mama - 11 hours ago
Why not knock it down and build two parliament houses on the site instead? :-P... View
Property 7

retep - 12 hours ago
With concrete a substantial source of environmental warming gases I would think the ACT government would be all over this. No... View
chewy14 - 12 hours ago
BJ, The developers build what the market tells them too. If there wasn't a demand for the units they are making, they wouldn'... View
News 8

@The_RiotACT @The_RiotACT
Fancy making the most of the beautiful autumn days here in the capital? There's plenty happening - so get out and about! https://t.co/GuOk85t9aP (10 hours ago)

@The_RiotACT @The_RiotACT
As Canberra's demand for housing continues to grow, are there too many new apartments on the horizon? One expert says no https://t.co/wOvLEBTlHx (13 hours ago)