Theodore....it's not the wild west 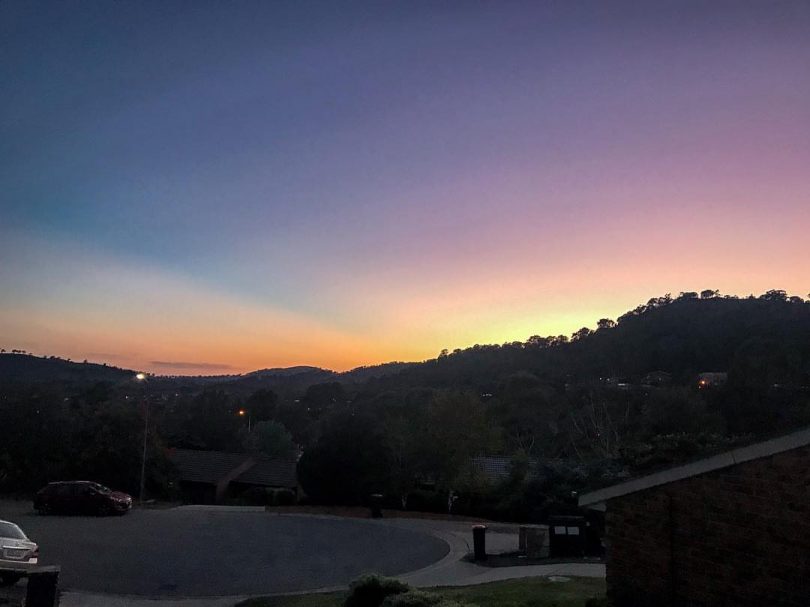 Don’t believe the naysayers, Theodore is the bee’s knees, and here’s why. Photo: M Parton

In the last week I’ve had, online and face to face, discussions with a number of people who seem to think that the suburb of Theodore is some sort of war zone.

Theodore is one of those Canberra suburbs that’s not on the way to anything else. It’s on the south-eastern fringe of the city and has no connecting roads to other suburbs. The only reason people go to Theodore is to go to Theodore and as such it’s a place that many have never set foot in.

We moved to Theodore in December after nearly a decade living in Bonython and I have to say, if your perception of Theodore has been formed purely by reading recent headlines then you’ve probably got it wrong.

In 2019, my suburb has made the news for all of the wrong reasons, including extreme school bullying and gun violence. The stories of violence at Theodore Primary gathered such momentum that they were splashed over national newspapers as well as our local outlets.

The reports were extreme and could easily have led you to the conclusion that this was a dysfunctional community. Nothing could be further from the truth. It was the courage and cohesion in the school community which led to these incidents coming to light. Similar problems exist in a number of other schools across the territory, but a group of Theodore Primary parents refused to accept the status quo and stood up for change.

My party supported those parents by calling for an independent inquiry into school violence in the ACT, but that was stymied by Labor and the Greens. I understand that those parents are now gathering support from others across the city with a petition calling for that inquiry.

While all that was bubbling away over the weekend, gunshots rung out in the Theodore Valley on Saturday night. My wife, Luisa and I were sitting at home watching a movie, but we clearly heard the commotion. I momentarily believed that it was a fireworks display, but quickly came to the conclusion that this was much more sinister.

The shooting was on Freda Gibson Circuit on the eastern side of the suburb. The street was in the news a number of years ago after a bikie-related shooting and many including myself jumped to the conclusion that this incident would be linked to outlaw motorcycle gangs. That remains to be seen and at the time of writing, the police investigation is ongoing.

Whatever that investigation uncovers, my discussions with Theodore residents lead me to the conclusion that the suburb overwhelmingly supports the introduction of anti-consorting laws to deal with the explosion of bikie-related violence right across our city. 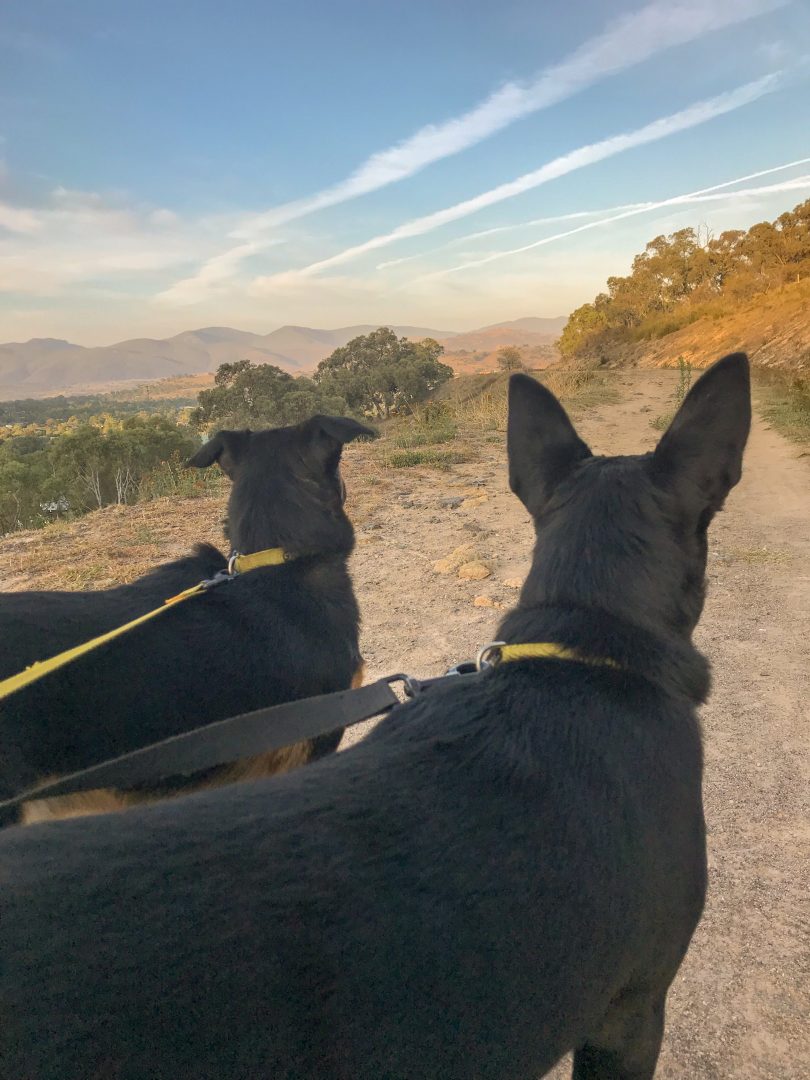 A great environment for humans and their furry companions. Photo: M. Parton.

Theodore is not the wild west. It’s just a gorgeous bush suburb nestled in its own valley and populated by a wonderful community of families and individuals. We love it for the wonderful views, the amazing variety of birdlife that come to our backyard and for the sense of community. We certainly don’t regret making the move.

This is the first time since my days growing up in the bush that I’ve known virtually everybody who lives on my street. This is a place where neighbours talk and where community is real.

But the thing that drew us to Theodore is the proximity to bush. The fire trail that surrounds the suburb genuinely signals the edge of suburbia. Once you climb up to Tuggeranong Hill or any of the other peaks in that line, you’re greeted with views of rolling hills, mobs of kangaroos and the sounds of black cockatoos and kookaburras in close proximity.

From there you can stroll on down to the Lanyon Valley, to the Monaro Highway or out to the Rob Roy Range Nature Reserve. In essence, once you clear that initial ridge, you could easily be in the middle of nowhere.

My many dog walks in the suburban streets has led me to conclude that Theodore has an extremely high per capita ownership rate of dogs, four wheel drives and boats and to me, that translates to a great place to live.

Don’t believe the naysayers. Theodore is the bee’s knees.

Mark Parton is a Member for Brindabella in the ACT Legislative Assembly.

Not a patch on Queanbeyan. I lived in Conder for a year in the early 90s. It was mostly a kangaroo and mouse paddock back then. Theodore was just over the hill. The Calwell shops were pretty good and a 5 min cycle south you’d be in the countryside, not a big city. But the daily traffic snarl in the highway was insufferable. To the old Canberra drivers it was dog eat dog, tailgating 2 meters at 100kph. On a wet day it was chaos. I looked up the bus timetables and if I left work at 4:45pm I’d get home, three busses later and a half hour wait at Tuggeranong, at 8:30pm. I reckon I could have walked quicker. Then I discovered Queanbeyan, bought a whole house for half the price and paid it off in 2 years! One express bus took 20 mins.

Why rely on non-existent public transport. Get a car.

Suburb is ok but these kinds of negative incidents move the prices of houses down as no one wants to buy in a crime zone.

“Theodore is one of those Canberra suburbs that’s not on the way to anything else.”

Yes it is. You park the bike or car there before walking up Tuggeranong Hill 🙂

James Forge says Theodore is a very nice suburb but oh, the drive to work.

I worked with a guy who caught the Bus to Belconnen from Theodore and he complained it took him over 3 hours commuting a day. I just checked Action bus maps and all the 4 journey options were between 1hr29 and 1hr39 one way. Arghhhhhh

Or 32 minutes by car according to google maps.

Theodore is a very nice suburb but oh the drive to work.

Because the closeness of bushland walking tracks are more important than being safe from guns and having your kids bullied on the playground.

Often make the trek to Calwell playing fields every year..but will be sure to pop in next time Mark Parton

Bradley Doohan I love your work !!

What about the shooting on Theodore

You make some great points about Tuggeranong suburbs being a great place to live for the majority of residents. I lived there for many years and appreciate the opportunities it gave me firstly in an ex-govvie single parent household in Snodgrass cres, to my own simple house in Kambah before moving gradually up and up the property ladder over the years to a very fancy area and house. Yay for me.

It really is a great area for the middle class, but it’s the issues for the working poor of Tuggeranong suburbs that you are not reflecting in your piece. The forced school closures of Kambah really hit a lot of young people very hard and education in the suburb has never recovered. Education for many kids in Tuggers is proving woefully inadequate across many measures.

Facilities, play areas and services for poorer families has been left in the 1970s or totally taken away by the ACT government.

The governments neglect of certain people and parts of Tuggeranong, has led to the current social issues around school, family and gang related violence. Equally, the lack of local entertainment and local opportunities for the poorer households of the outer suburbs has created many problems.