Experts in buying, selling & renting
Your property, your future
20 August 2020

'They were only boys': Crookwell war widows on the mateship forged on the frontline 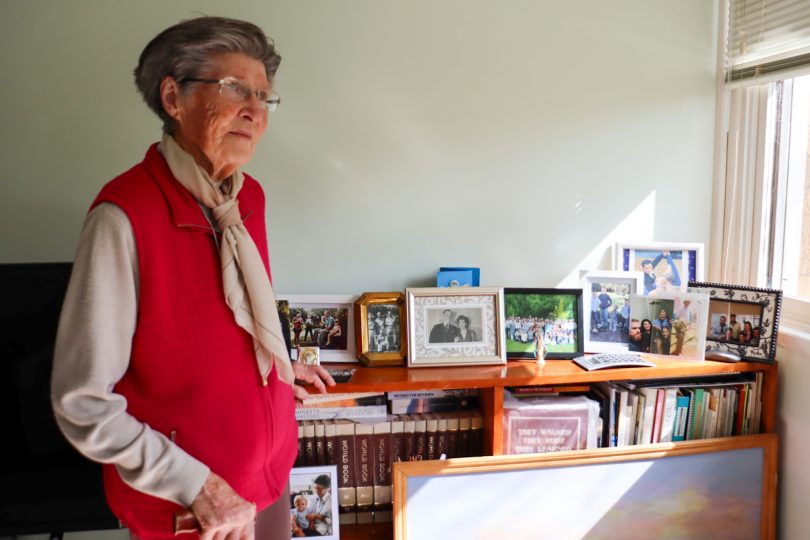 Gwen O’Brien, aged 94, is one of the few war widows remaining in the Crookwell district.

Her brother, John ‘Jack’ McIntosh, was 19 when he left from Crookwell Railway Station to join the army’s 3rd Battalion and its fight against Japan at Darwin wharf and in New Guinea.

Gwen’s husband, Geoffrey O’Brien – who she met after World War II – had left the same railway station four months earlier, aged 20. He was destined for New Guinea as a member of the army’s 18th Field Ambulance.

“They were only boys,” says Gwen. “A 19 or 20-year-old is at university these days, but those men saved us from the Japanese.”

Australia’s World War II veterans didn’t speak of the war often, but when they did, it was of the enduring mateship they found on the frontline.

Gwen and Geoffrey’s romance blossomed following an encounter at Crookwell Show a year after the war. He recognised her among the crowd from their brief introduction during the war.

While Geoffrey rarely talked of the war, he and the mates he’d made in New Guinea met up every year for the rest of their lives.

“They didn’t tell us much,” says Gwen. “I don’t think they wanted to remember.

“The camaraderie that existed between him and his mates was unbelievable. You couldn’t penetrate it. They were so pleased to see each other – not to celebrate war, but to celebrate the mateship they had formed from looking after each other and having each other’s back.”

Up the road from Gwen in Crookwell lives another war widow, Rita Beattie, aged 89. She also met her husband, Robert ‘Bob’ Beattie, after the war.

Bob was enlisted, aged 22, on 16 August, 1940, and served 1759 days in the army, including in New Guinea during the Kokoda Track campaign, and later in Darwin and Timor.

“Bob would tell me about the Indigenous people in New Guinea, but not much else,” says Rita. “He didn’t like talking about it. They were living in pretty rugged conditions in New Guinea, often moving in wet clothes and sleeping in running water. His mother told me he was a bit of a nervous wreck when he got home.” 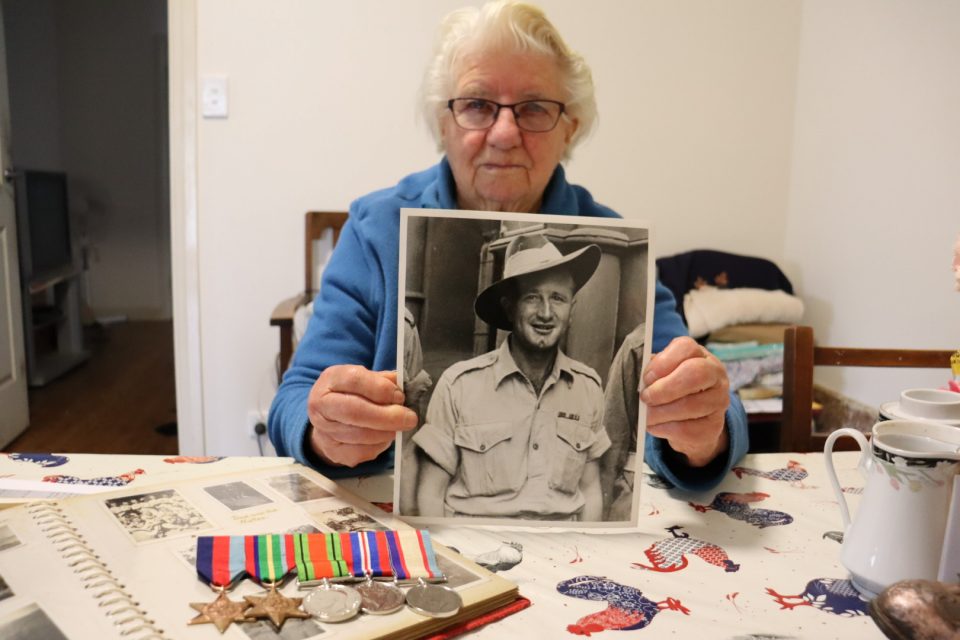 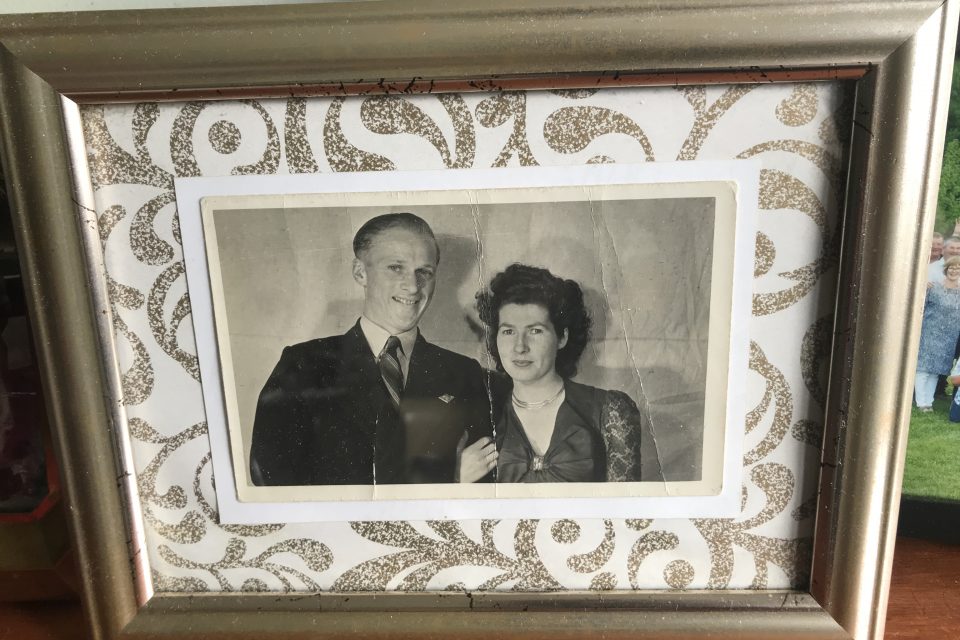 A younger Gwen and Geoffrey O'Brien at a ball post-WWII. Photo: Supplied. 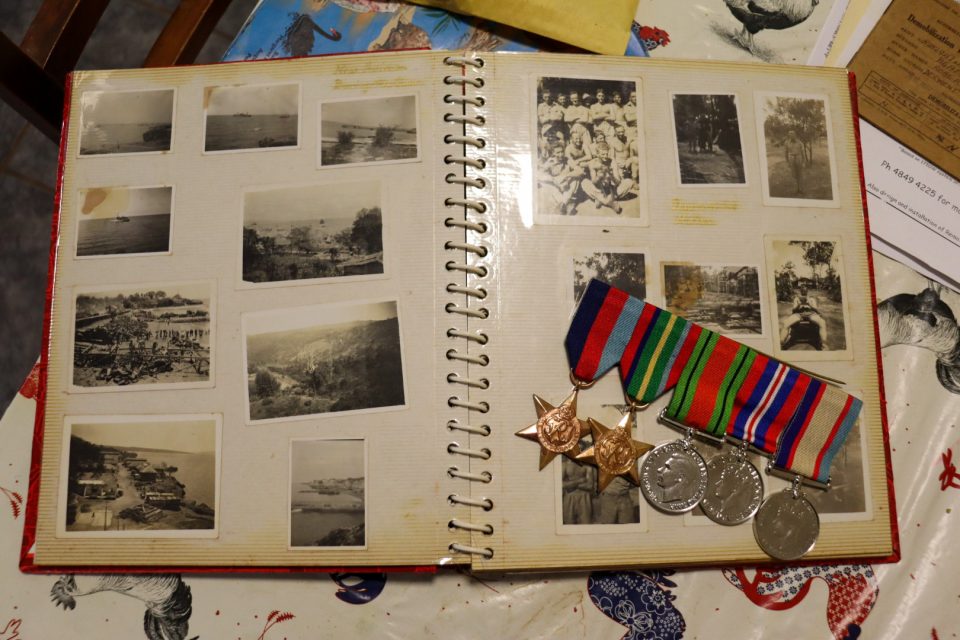 An album of photos and medals collected during Robert Beattie's posting in New Guinea during WWII. Photo: Supplied.

“He was a bit of a naughty boy,” says Rita. “He copped several fines for absence without leave. He said they didn’t know if they were ever coming home so they may as well have a bit of fun.”

The year before Bob died in 1976, he visited Tasmania with Rita to find two friends he’d made while with a Tasmanian unit in New Guinea.

“It was marvellous when they met,” says Rita. “They talked and talked and had a great time, but they would only talk about their mateship, not what they saw in New Guinea.”

This time of year reminds Gwen and Rita of the conflict their husbands endured.

Victory over Japan Day on 15 August, 2020, marked 75 years since Japan surrendered to the allies in 1945, while 2 September marks the official end of the largest war in history when Japan signed the Japanese Instrument of Surrender, also in 1945.

Gwen Warmington, aged 88, of Yass, was a 13-year-old Sydney schoolgirl when the siren sounded and she was told to go home because the war was over.

“There was spontaneous jubilation – singing, yelling, clapping, anything to make a noise,” she says.

She hitched a ride from Kogarah to her home in Punchbowl because the trains were overcrowded.

Several hours later, her cousin, a nurse, took her to Elizabeth Street to join the celebrations. It was there they saw the iconic dancing man whose image has become synonymous with VJ Day.

“He is stuck in my mind because I had never seen anyone dance in the street before,” says Gwen Warmington. “There was so much excitement.”

There was also personal reward for her with the return of her brother, Cleve Downe, and her cousins from the war.

In the following days, she helped her mother to take down the dark blinds used to cover their windows during the blackout.

In Rita’s Rannock home in the Riverina, where she grew up before moving to Crookwell, her father took down the map he had used to follow the war.

“Dad was pedantic about it,” says Rita. “He would listen to the wireless and mark how much they had advanced or retreated. He was so relieved when it was all over.”