Things looking up for the bike cages? 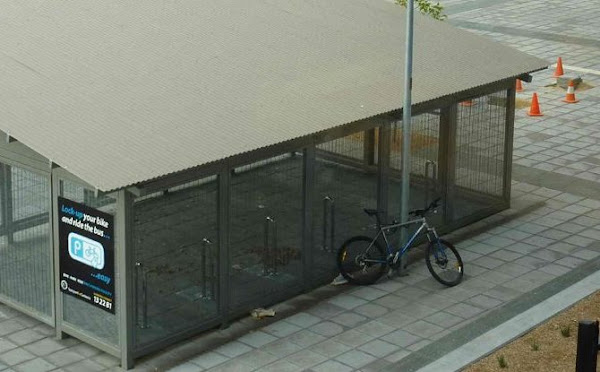 Earlier in the week Danni sent in evidence of less than enthusiastic uptake for the Belconnen bus interchange bike cage.

Today Susan has very kindly sent in evidence that things have improved somewhat.

6 Responses to Things looking up for the bike cages?
Filter
Showing only Website comments

Been more than 3 weeks since I put my application for a card in. Still nothing. That would be why they remain empty I’m guessing…

I actually saw a red trike in that Belco cage a couple of weeks back!

The bike cages are a good idea, however the “improvements” made to Belconnen are designed to detract pedestrians and cyclists and encourage people to drive and pay for parking. You probably wouldn’t have noticed the fragments of cycle lanes and pathways around the area that don’t join up and make it far more dangerous to get around Belconnen unless you are a local. For public servants in the area the removal of the red bridge has made a quick trip to the mall for lunch far longer (and not worth the bother). Then the fencing to stop people trying to get across to the mall quicker has made visibility for pedestrians and drivers far more dangerous. The area is now a black spot, whereas before all the improvements started the area rarely had any accidents, in the years I’ve been a local I can’t recall a single one. In the past year I know of at least six. So don’t knock the bike cages, they are practical and people would be willing to use them… now if they only had safe passage around Belconnen on their bikes to reach them.

Haha how hilarious. It’s stupid having that cage there anyways since the office blocks nearby all have their own bike storage.

Looks to me like a great place to leave your kids while you go shopping, Secure, plenty of fresh air….

wrong time of year to be launching these, as the weather gets even colder

Julie Macklin - 44 minutes ago
Alicia Conley The ACT has no cycle paths. They are shared paths. Yes, those around the lake were built with people on bikes i... View
chewy14 - 2 hours ago
"That they are public doesn’t mean there are no rules for using them." Exactly my point. That the rules should preclude cyc... View
Craig James - 2 hours ago
Keep riding your bicycles on the road, Darwinism at it’s finest 🤷🏼‍♂️ View
News 9

Mazzie Woodward - 58 minutes ago
We don’t have a working hospital and they are building a giant battery 🔋 does anyone else find this utterly ridiculous? View
HiddenDragon - 5 hours ago
"....will ensure that the nation’s capital remains at the forefront of a booming industry – supporting new jobs in emergi... View
News 21

chewy14 - 1 hour ago
Nobody, Interestingly, one year later, that number is down to 100 under construction or "planned", with another 300 "proposed... View
whatwik - 7 hours ago
There's certainly a nuclear reaction from the usual suspects here any time renewables are mentioned. View
Futureproof - 7 hours ago
Nuclear - the Greens say no New hydro dams - the Greens say no Windfarms in remote areas - Bob Brown says no... View
Community 49

Juanita Tee - 2 hours ago
David Keir what are you specifically doing for them 🙃... View
Liv Miller - 3 hours ago
Rachel Edmondstone love 💓 this View
David Keir - 7 hours ago
Virginia Loizou sounds like you’re the one whinging champ View
Property 28

David Conway - 4 hours ago
Colin Ball totally not fair and they get to play grand theft auto in prison.... View
Community 8