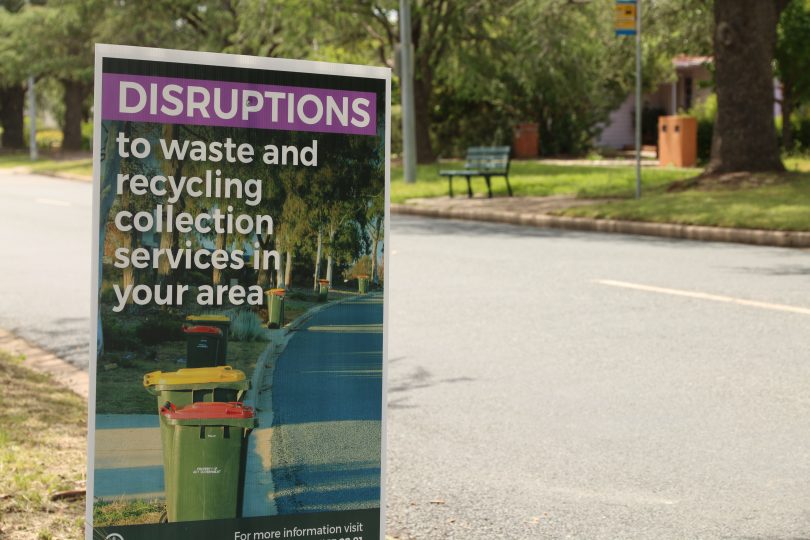 Garbage truck drivers will begin their third strike in as many weeks today (16 November), affecting bin collections until Friday.

This week, parts of Belconnen, Gungahlin and the Inner North will miss their regular collections while other suburbs will have their waste collected a few days later.

Suez and the Transport Workers’ Union (TWU) are set to continue negotiations on Wednesday.

“The company believes this offer is reasonable and fair given the current economic circumstances in Australia, reflected in Canberra’s CPI figures that show a rise of just 1 per cent in the 12 months to September,” the company said in a statement.

“All divisions across Suez have taken action to adjust to the vastly altered economic landscape in which we are all living in order to ensure the longer-term economic sustainability of our business. These steps include no CPI salary increase for salaried employees in 2020 and alternative working arrangements, including a reduction in hours for many employees.

“Our senior leadership team took a 25 per cent pay reduction for three months at the height of the pandemic.”

The company says the wage increase drivers are seeking is at odds with Reserve Bank forecasted wage growth.

In a statement to Region Media this morning, TWU ACT Secretary Klaus Pinkas said “it is a fundamental belief of TWU members that it is a good thing that critical service workers be well paid”.

The union also countered the accusation that its pay claim was too high given the current economic circumstances.

“Low wage growth in the Australian economy is an acknowledged problem,” Mr Pinkas said, “but when people claim quite rightly for higher wages, they are shouted down erroneously as ‘greedy bastards’ – usually by the corporations.”

The union noted that the income Suez receives from the “extremely profitable ACT residential waste collection contract is unaffected by the pandemic or any other outside factors”.

If you have a Tuesday waste and/or recycling collection

If you have a Friday waste and/or recycling collection

I would say the best place to drop off your rubbish is at the front door of the TWU office in Fyshwick.

Here we have the TWU trying to kick-start inflation after the RBA has tried and failed for the past 10 years. Good luck with that!

It’s good you have Suez point of view. Did you also speak to the union?

I’d suggest the union point of view is pretty is easily inferred. They feel the drivers are worth more than 8% over 3 years. Pretty obvious if you ask me.

Sandra Stevenson - 4 hours ago
Sylvana Whyte Good idea! View
Jennifer Blood - 6 hours ago
Very interesting explanation of how the buildings were constructed and leased, leading to the lack of uniform upkeep we see t... View
Iaian Ross - 8 hours ago
"To have time out, she would walk to Manuka Pool for a swim and walk back in time to be ready to cook the first breakfasts of... View
News 24

Peter Curtis - 9 hours ago
I cannot agree more. View
Nick Swain - 9 hours ago
And so do the equally old Kingston shops. Both shopping centres have long standing nominations to be included on the ACT Heri... View
bj_ACT - 16 hours ago
Why is Morris always calling on the ACT Government to pour funds into areas where he is making millions and millions of dolla... View
News 70