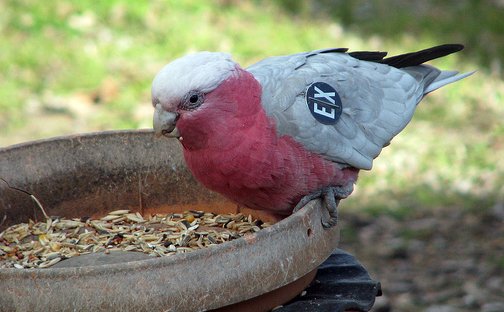 We spotted this galah in the backyard yesterday, wearing “badges” on its wings marked “EX”. Is this an ex-galah, one half of a failed relationship, an express courier galah or what?

It was flying with other galahs and seemed quite normal in its behaviour.

Just wondering what’s going on here – maybe this is some sicko scientific research project. Or some sort of McDonalds giveaway – collect galahs making up a common word and you win a prize?

I just spotted Galah number 13 in Russell st Hackett. these birds are still going – how long do galahs live anyway?

Just letting you know that i saw this very same bird on Sunday 21 October 2012 off Quick street not far from Limestone avenue, in Ainslie on the CSIRO hill side. it appeared to be doing well. Never seen a bird before with the EX tag but is identical to the bird in the photo.

I often see these banded birds. but forget the number by the time I get home.

I think it is D1 that I used to see up around the Hackett watertower.

I wrote to the scientist behind the project, Judith Scarl, and here is the update she kindly sent for Rioters:

Thanks for sending this along! I don’t have an account with The Riot Act, so I cannot reply to the post, but if you would pass along my message I would be grateful!

I’m excited that EX is alive and well! This is a male bird, and he and his partner T0 were some of my favorite birds; they bred in the same cavity 2-3 years in a row and were an extremely coordinated pair. I’d love to hear any reports of tagged galahs that people see; although my official study is over, reports of tagged birds add to our knowledge both of galah longevity and also the impacts of wing-tags on these birds. If the person that saw EX would report his location, I would be very grateful. I banded that bird in 2005 in the Majura/Ainslie area, and I wonder if he is still there.

There was a discussion on the Canberra Ornithologists’ Group a few years ago about wing-tags for galahs, and much of my response to that group is relevant here, so I’ll paste the results of that discussion. If anyone is interested, I’d be more than happy to chat about galahs and my research!

I studied galahs in Canberra from 2004-2006, largely in the Ainslie-Majura area. The focus of my thesis was on vocal communication and sex differences in these parrots. I’ve had some papers published on my work and if you’re interested I’d be happy to send them along. My study relied on identifying individuals and observing changes in pair-bonds and interactions over time. As I was not using cannon nets or rocket nets to catch birds, the banding process was slow- I banded an average of 20 birds per year. Thus, I needed the tags to stay on for multiple years. I had also hoped that someone would take over this study after I finished my Ph.D., since having a banded population with historical data can be quite valuable to a scientist. We never found an interested student. (Since several of these tagged birds are still around, this possibility is still open, if you know anyone who might be interested!) We did use radio transmitters to track a very small subset (<10 individuals) of these birds, and those radio collars were designed to fall off in 6-12 months- and most of them did fall off within 6 months.

There is mixed evidence for the effects that wing tags have on parrots. Ian Rowley, who studied galahs for many years in the 1970s and 1980s, had great success in this species using wing tags. Denis Saunders tried wing tags on black cockatoos and found greatly increased mortality. Success seems to depend both on the species and the tags used (for example, Ian Rowley found that only galahs with blue tags had increased mortality risk, so I did not use blue tags).

One interesting thing I noted was that my assistants and I repeatedly saw almost all, if not all, of the individuals that we trapped in the very early mornings (before 6 a.m.); those seemed to be the local birds that came over for a quick feed before moving farther afield. This local subset of our population was seen both in the year that we trapped the bird and generally in the subsequent year. This suggests to me that these birds were doing quite well with the wing-tags, although of course I don't have data beyond three years on most of the birds. (Note that EX was one of these local birds, and if he is still in the parks and backyards near Ainslie, he has been local for 7+ years!)

Anyone that has trapped galahs will probably sympathize with this statement- galahs are very difficult to trap and even more difficult to re-trap! During my entire project, we only re-trapped one banded individual- a male that we caught a year after we tagged him. Targeted trapping at nests was somewhat (but not much) easier and definitely more disruptive to the birds. We didn't remove the tags for several reasons: difficulty (rather, near impossibility) of re-trapping banded individuals (these are smart birds! They were very suspicious of us!), additional trauma of re-handling birds after they'd adapted to their tags, and hope that another student would take over the galah project.

I love hearing stories of how these birds are doing and encourage anyone that sees a wing-tagged bird to report it to the Australian Bird and Bat Banding Scheme (http://www.environment.gov.au/biodiversity/science/abbbs/); they periodically send me reports of these sightings and this data can be used to track galah movement and longevity. If anyone would like to study these tagged birds, I'd be happy to talk to them. And although I do love the Monty Python skit, it makes me very happy to see that one of my banded birds is not yet an ex-parrot.

A google search brought this up:
http://bioacoustics.cse.unsw.edu.au/archives/html/canberrabirds/2006-12/msg00009.html

Maybe it has been tagged since 2006. Definitely reporting to whoever, in case it was a long-term research project!

Thanks! I’ve sent an email off to the address listed. The galah came back again today. I’ll keep an eye out for more birds with personal tags.

Maybe it escaped from someone’s excuse for art…

It’s the EX model galah. It’s got a sunroof, spoiler and sports suspension.

A google search brought this up:
http://bioacoustics.cse.unsw.edu.au/archives/html/canberrabirds/2006-12/msg00009.html

Maybe it has been tagged since 2006. Definitely reporting to whoever, in case it was a long-term research project!

“Look, matey, I know a dead parrot when I see one, and I’m looking at one right now.”

Colin Vivian - 28 minutes ago
Elroy Jones and if you look at the ACT audited financial statements you’ll find net financial liability, net debt, net oper... View
Elroy Jones - 3 hours ago
Ruth Brown that’s because they’re underground (where they should be!!) DA won’t get through this Gov without serious at... View
meomi - 9 hours ago
This is horrible! There are many water birds and insects nest in the plants along the lake, now all become concrete! The conc... View
News 1

Latoya Wedlake - 4 hours ago
Joel Davies this is prefect.. my birthday coming up soon 🙂... View
Natalie Murnane - 8 hours ago
The two golf courses next door aren't enough? View
Frank Murnane - 10 hours ago
Would need to clear the trees for a chipping green View
News 36

@The_RiotACT @The_RiotACT
Wondering about the best ways to talk to your young children about coronavirus? Here are some expert tips https://t.co/uv6q0PBSMi (51 minutes ago)