Experts in buying, selling & renting
Your property, your future
13 November 2020 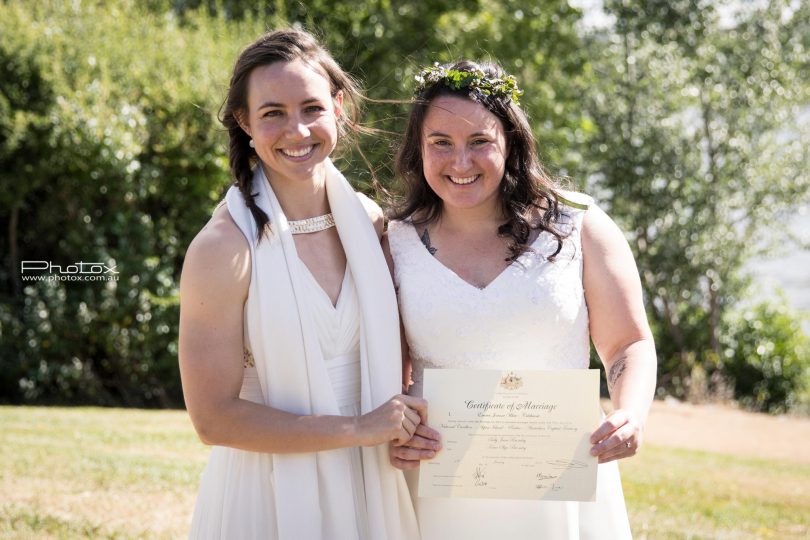 Sally and Kara Bromley were the first same-sex couple to be married in the ACT. Photo: Photox – Canberra Photography Services.

Although it hardly seems possible, this Sunday (15 November) marks three years since the country said ‘YES!’ with an overwhelming display of support for marriage equality.

In the ACT, the turnout for the postal survey and the positive vote were above the national average (74 per cent in favour in the ACT compared with 61.6 per cent nationally), and the city took to the streets afterwards to celebrate the result after a divisive campaign.

In response, the Territory government even had the famous ‘Rainbow Roundabout’ commissioned on Lonsdale Street.

With their wedding held in January 2018, the ACT’s first same-sex couple to be legally married in the ACT were Sally and Kara Bromley.

Both women said they largely disengaged from discussion surrounding the lead-up to the postal vote, saying that many of their friends found the discourse, on social media in particular, to be quite harmful to their mental health. They found it safer to protect themselves.

Instead, after the announcement, what they both remember is an intense feeling of relief and Sally said it felt different to walk around in public one another.

Having already committed to one another in a ceremony earlier in 2017, Sally asked Kara if she wanted to get married, “for real this time”.

So they quickly jumped through the legal hoops, including giving the required month’s notice, and tied the knot in an intimate ceremony on the lake, in which neither bride was late.

Since then, the pair have kept busy. Shortly after their marriage they went through IVF and now have a two-year-old daughter. They’re currently house-hunting, which they say is keeping them occupied.

Throughout all of this, being married has given them both a sense of security. It means they are protected as a married couple and there are “no grey areas”.

The couple says that being able to introduce one another as ‘my wife’ feels easier and safer, because no one can question it now.

You can celebrate the moment the country said ‘Yes’ this weekend at a slightly smaller than usual Yes! Fest. Festivities are also available for streaming.