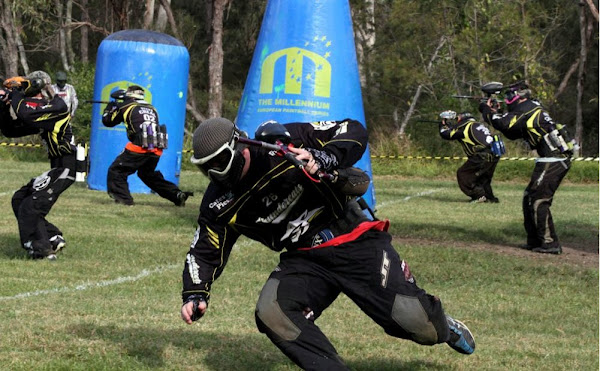 Round 2 of the Australian Super 7s paintball series was completed in May, marking the largest paintball tournament ever held in Australia, with 46 teams spread across four divisions.

2011 Division 2 Champions, Canberra’s Thundercats, marched strongly back on to the Division 2 (Semi Pro) winner’s podium this time after a poor showing at Round 1. A two pool structure was used to accommodate the 14 teams competing, with Thundercats beating Sydney Cynidate in a sudden death one vs one playoff to reach the final after scores were tied at 2-2 after time expired. They went on to win their final in convincing fashion against Sydney Shenanigans 2-1.

Uprising B showed improvement in their second outing at this level, finishing 6th and are now placed 8th on the championship table. New Zealand’s Clown Monkeys were disappointing, finishing in 12th place this round after extremely strong performances at the last 2 tournaments (not losing a game at Round 1 this year) but a 5 hour delay on departure from Christchurch on the Friday prior to the tournament and delayed baggage upset their equilibrium. Fellow New Zealand team Havoc also made the cross Tasman trip this event and fared better, placing 5th overall.

Division 1 (Pro) was won by a resurgent Sydney SWAT 4-1 over a previously undefeated Hostile Intentions from Brisbane. Hostile played strongly all weekend to be undefeated prior to the final but after inconsistent round games, SWAT found something extra in the final to avenge their round defeat and also their Round 1 finals loss to Hostile. SWAT now holds a narrow lead on countback over Hostile at the top of the Pro championship table.

New comers to the eight team Pro division, Canberra’s Uprising, showed that they could well gain a podium place this year, once they learn how to improve consistency and close out games from strong positions. Gaining 5th place overall this round, they held a 3-1 lead over SWAT at one stage in their round game before losing 4-3 with 4 seconds on the clock. It was a similar story against XFighter$, where they held a 2-1 lead before going down 3-2 and an unexpected thumping by Hustle didn’t help their cause, but two or three additional wins in the round could have seen them in 2nd place for a finals matchup. Apocalypse, as forecast was hampered by line-up changes through injury and had mixed results, placing 7th overall while Uprising still holds 5th place on the championship table.

For local paintball fields contact Predator Paintball (0420580834) or Paintball Sports ACT (62588238). For more information on the tournament paintball scene in Canberra, email inquiries can be sent to act-paintball@optusnet.com.au.

Lucy Green - 5 hours ago
I have lived in the area for a long time. These birds are definitely breeding and spreading. What started as the Narrabundah... View
David Worboys - 14 hours ago
As new comers to the suburb it was great to see these birds at first. But after seeing the number of near misses with car acc... View
George Jenson - 17 hours ago
With all due respect I agree. They are feral animals. I have seen the skinks in our front yard disappear. What about the enda... View
News 5

gooterz - 14 hours ago
The anti VAx community would have a field day with the at your own risk nonsense.. The park should be fit for purpose. It eit... View
Dallas Stow - 19 hours ago
I'm guessing that injuries have occurred to only a very small minority of users. Why close them off to all if some vetty few... View
ChrisinTurner - 23 hours ago
Children need to be taught tat living in Canberra is dangerous, in particular the 50 km/hr speed allowed in residential stree... View
News 51

A_Cog - 17 hours ago
That’s completely untrue. Pertussis vaccinations are given to parents and close relatives to prevent the baby catching whoo... View
News 8

ChrisinTurner - 23 hours ago
The government could try reducing the crippling rates they charge these small businesses. Enforcement of parking limits would... View
show more show less
*Results are based on activity within last 7 days

@the_riotact @The_RiotACT
The 'Canberra Region Advent Calendar' compiles 24 mini products from various small businesses across the #ACT and surrounding region, with a very distinct #Christmas theme. 'Tis nearly the season, after all https://t.co/uhC760mQOw (23 minutes ago)