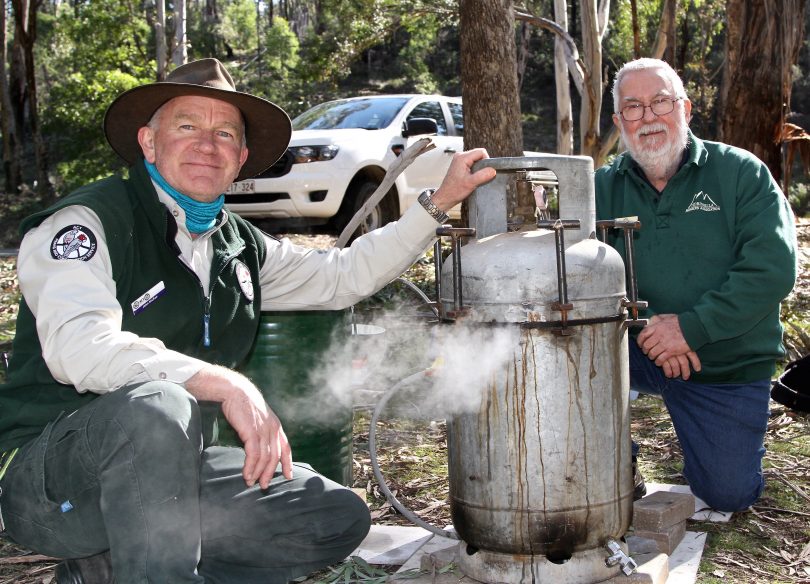 For Geoff Puleston, the good oil is the smell of freshly distilled eucalyptus leaves which is again filling the forests of the Tidbinbilla Nature Reserve thanks to a new replica distillery that preserves the area’s rich eucalyptus distilling history.

Geoff says nothing beats the smell of steam from a eucalyptus distillery. It also happens to make a perfect hand sanitiser that doesn’t even need bottling, just rub your hands in the steam for a second (without letting it burn you, of course).

No wonder it was said that people in the Tidbinbilla area rarely caught a cold.

Geoff and the Tidbinbilla Pioneers Association are keeping the area’s rich history of eucalyptus distilling alive, a history which dates back to the early 1940s when a few brave migrants from Czechoslovakia began extracting the precious oil.

A similar distillery operated in the forests around Queanbeyan, but the one at Tidbinbilla and nearby Nil Desperandum proved to be a lucrative operation before the migrants moved to the Snowy Mountains Hydro project. 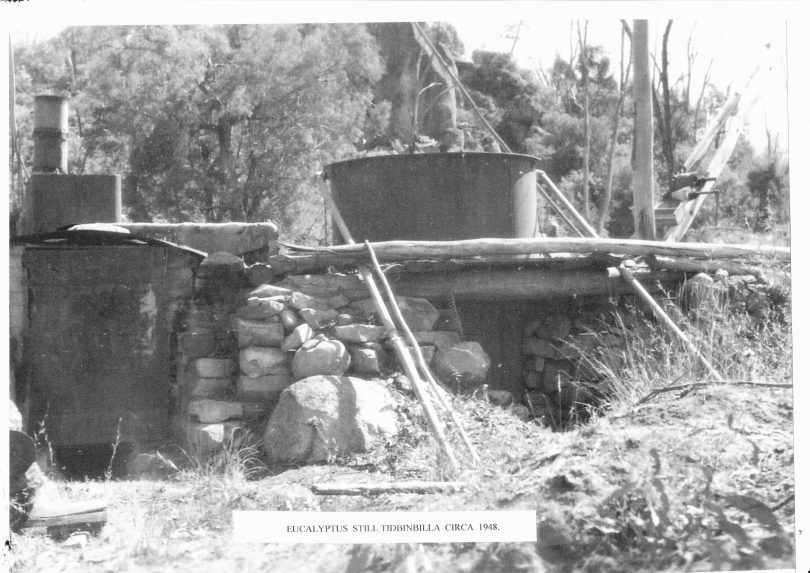 A eucalyptus still at Tidbinbilla from about 1948. Photo: Tidbinbilla Pioneers Association.

The empty tanks were left discarded but Geoff and the Tidbinbilla Pioneers Association, with assistance from ACT Parks and Conservation Service, have resurrected the age-old distillery, albeit on a smaller scale.

“We know that the hills that surround us have borne witness to tens of thousands of years of human habitation, but today’s installations give us a window into a more recent past,” Ms Vassarotti said.

“Production of eucalyptus oil in Tidbinbilla was stopped in 1962 when the initial fauna reserve was set up. Since then, all we’ve had to get a glimpse of this iconic history is a few old photographs and relics, which don’t really paint the full picture of life back then.

“This piece of our shared past was almost lost, until Geoff Puleston and the Tidbinbilla Pioneers Association were awarded $7,000 through last year’s Heritage Grant program.

“Thanks to their drive and passion, the association and the ACT Parks and Conservation Service have now revived a piece of history that all Canberrans and visitors can enjoy.” 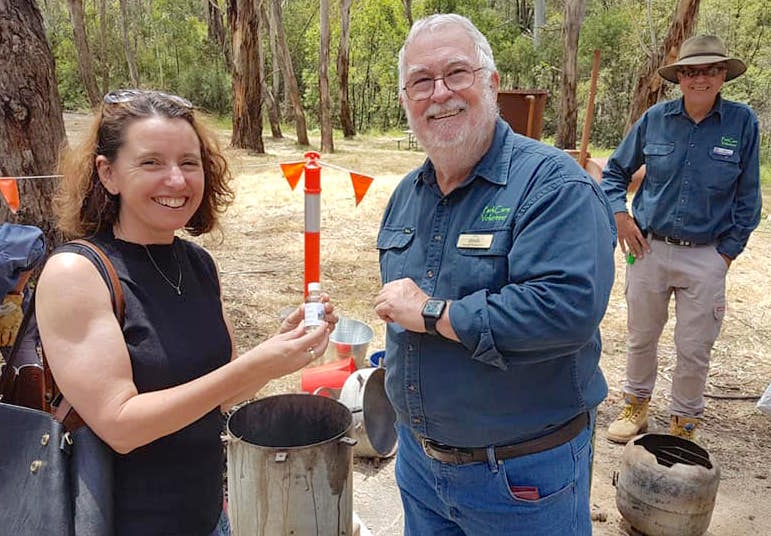 Minister for Heritage Rebecca Vassarotti with a bottle of eucalyptus oil with Geoff Puleston. Photo: Supplied.

Indigenous Australians first used eucalyptus leaves to help ward off colds, while there are stories of how the first residents at Tidbinbilla survived on the smell of an oily eucalyptus tree.

Czechs Jan Jandura-Pucek, Steve Lajcin and Martin Tekel were the pioneers of the fledgling industry in the area that paid the equivalent of $2600 for a drum. Each man could earn more than 14 pounds per week from the oil, considerably more than the 5 pounds paid for work as a farmhand.

The men lived at Black Flats at Tidbinbilla but worked the two distilleries at Black Flats and Nil Desperandum, where they also set up camp. They rotated between the two sites, decanting one 44-gallon drum every two to three weeks. They would cut eucalyptus leaves five days a week, distil on Saturday, which left Sunday for rest.

Ms Vassarotti said the replica at Tidbinbilla includes information on the history of the distillery and helps keep the early European stories of our region alive.

“This installation will let visitors to the reserve learn about this little-known history.

“I invite all Canberrans to come to take a step back in time and experience this unique history for themselves these summer holidays.”

Learn more about the history of the area on the Tidbinbilla Nature Reserve website or visit. Visitor fees have been waived until the end of 2020 to encourage visitors to return to the park and holiday in the ACT.