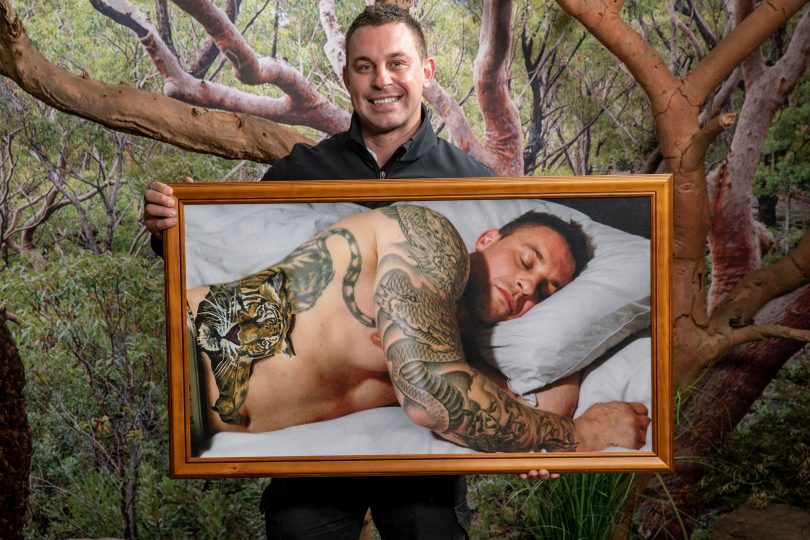 Mogo zookeeper Chad Staples shot to national attention when he led his team in the battle against the devastating Black Summer bushfires. Now his fighting spirit is being celebrated in an entry in this year’s Archibald Prize.

Painted by Mogo Wildlife Park’s resident artist, Lord DJ Stief, the work is titled The Tiger of Mogo and was inspired by Chad’s leadership, first through the bushfires and then through the park’s closures and reopenings due to the fires and COVID-19.

Using pointillism, dry brushing and traditional oil techniques, Lord DJ Stief has captured a portrait of a man who never rests – the tiger in him always on guard and alert.

‘Zookeeper Chad’ says it is humbling to have the human side of what he does inspire an artist.

“From the horrific bushfires to reopening to our community, then closing again due to COVID-19 – it has been incredibly challenging. DJ is an amazing talent and I hope this entry brings him all the recognition he deserves.”

Lord DJ Stief has been closely connected to Mogo Wildlife Park and its sister park, Featherdale Sydney Wildlife Park, as its resident artist.

This is the second time he has used Chad as a subject, although the first time he was more of a sidekick for Archer, the hand-raised koala used to help promote conservation.

“This is a very different portrait,” says Chad. “It’s quite intimate. I’m in a vulnerable pose; usually only your partner sees you look like that.

“I didn’t even know that was what it was going to be until I saw it. He did a couple of sketches, took a couple of photos in different poses so it was a surprise to me.”

The past year has been full of surprises for Chad, some of them unpleasant.

Featherdale Wildlife Park took over management of the then Mogo Zoo from Sally Padey back in November. Just weeks later, Chad and his staff were fighting for their lives and the lives of their animals as bushfires swept through towards the coast.

It was literally a baptism of fire.

“I’d been coming down for 18 months prior so it wasn’t like I didn’t know the zoo and the staff, but I’d only taken over as director in November,” says Chad.

“After the fires, we were closed because of the damage, for the clean-up and safety. When we reopened … we had so much interest, not only from the local community but nationally and internationally as well. There was so much energy and positivity.”

Then came COVID-19 and the zoo was forced to close again.

“That period was tougher,” says Chad. “It was almost like it split the community.”

Since the second reopening, visitation has been sporadic.

READ ALSO: Tough times bring out the best and worst in all of us

“At first, people were desperate to get out of the house and looking for the connection with nature they were craving,” he says.

“Then came the outbreak and spikes … there has been almost paranoia about the ebb and flow. People don’t know how to feel and that’s been reflected in the numbers.”

What doesn’t change at a zoo are the daily needs of animals and the long-term work involved in breeding programs.

“The animals come first, day to day, and my collection plan doesn’t change either – that’s a 10-year plan,” says Chad. “You can’t press pause because animals have specific needs and specific breeding seasons.

“[Last week] I went up to Canberra airport to pick up a golden lion tamarin. Wages and animal food are our biggest costs and those things don’t change.”

Fortunately, the Federal Government recognises the importance of zoos and wildlife parks to the nation’s tourism industry and has provided initial support. Chad is hoping that will be repeated in the next round of COVID-19 funding.

READ ALSO Call for action over COVID-19 clusters in schools

One bright spot in an otherwise fairly bleak year has been the growth in Zookeeper Chad’s social media following. He went from 23,000 to 150,000 followers on Instagram following the bushfires and has kept his focus on telling stories of hope and resilience.

“The whole reason for social media is to talk to people about wildlife and give them insights into what happens behind the scenes,” he says. “I love showing off the place to people – it’s a bit of escape and something I can give to people who are trapped at home.”