Tilba Real Dairy – responding to the environment and the market 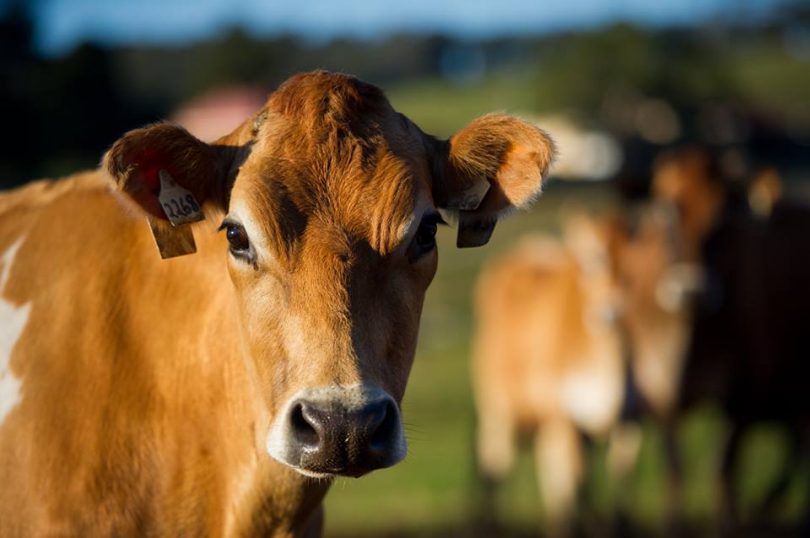 Erica and Nick Dibden, the brains, heart, and passion behind Tilba Real Dairy shake their heads when they talk about how they used to bottle their award-winning creamy jersey milk.

“We used to hand label every bottle,” Erica says standing in front of their new bottling plant.

“It was one bottle at a time with someone at the end screwing the cap on.

“When we got to 10,000 litres a week we thought we can’t do this anymore so we bought a little pneumatic capper and that worked well but this new machine is brilliant.”

The Dibdens are just settling into a new routine with their new US-made bottling plant which has allowed them to redirect some of their 22 staff into cheese making.

“This new machine is capable of handling one bottle every second, we aren’t running at that speed yet, we are running at about 40 per cent at the moment,” Nick says.

“We are now supplying from Cann River to Nowra and west to Goulburn, Bowral, and Canberra.”

The new bottling and labelling machinery is worth hundreds of thousands of dollars and runs three times a week inside the historic ABC Cheese Factory on Bate Street, Central Tilba. A site that has produced dairy products since 1891, but has been re-energised since the Dibdens took over in 2012.

“The machine does mean we can do more, but we need to get the milk, we need more milk,” Nick says. 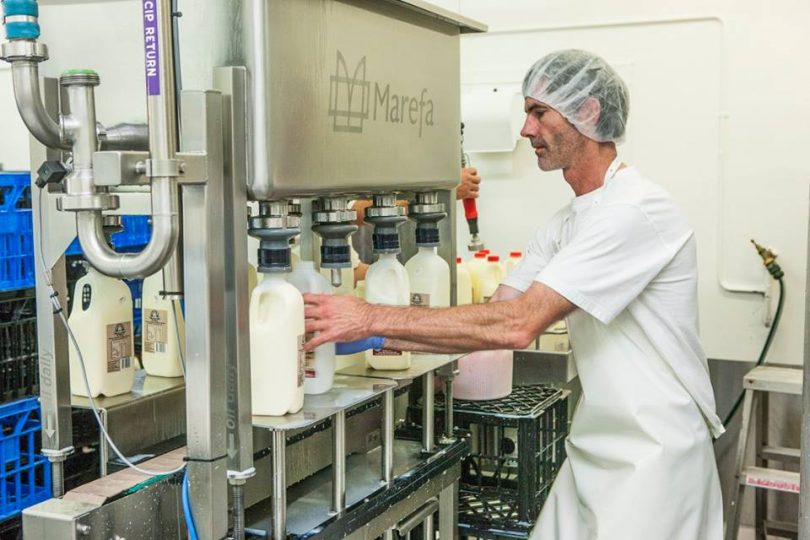 While the recent rain has been a welcome lift in spirits and allowed some farmers to grow and cut feed, the ongoing drought is still playing out on farms across the region. Keeping milk supply up as stock numbers and capacity drops in response to feed supplies and prices is the challenge for the region’s producers.

“Grain prices are going through the roof,” Nick says.

“If we can’t access fodder we have to trim our herd size down which will trim our milk supply down, but we have to be reactive to what the environment and the market are telling us,” Erica says.

The dryland jersey farm that produces the renowned milk and cheeses of Tilba Real Dairy sits on the fertile volcanic hills under Gulaga, just on the Princess Highway. The Dibdens say they have been relatively lucky to have green paddocks.

“Being a small business we can actually turn quickly and respond and be reactive,” Erica says.

“We are managing at the moment, we were buying milk from another jersey farm in the district, and are hoping to do that again in the future, but everyone is under pressure at the moment, everyone is in survival mode, it’s really tough.” 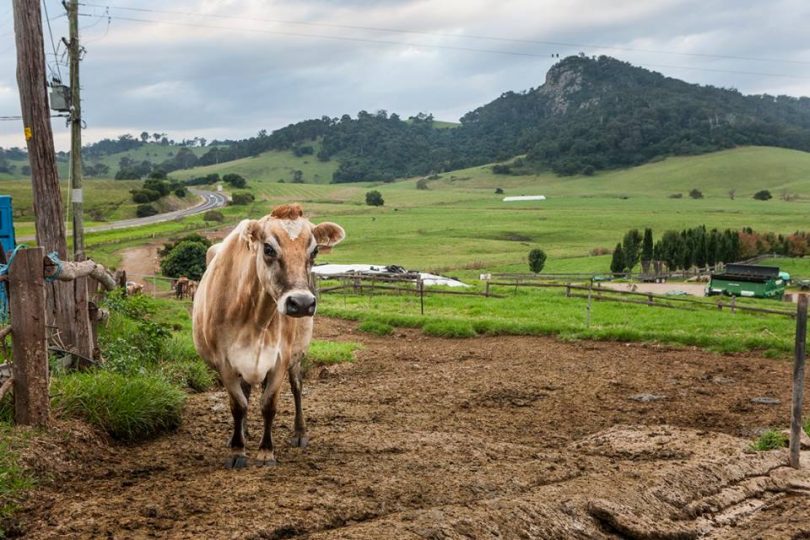 Like a postcard, the Dibdens’ Tilba jersey farm in greener times in 2016. Photo: Tilba Real Dairy.

Nick and Erica are milking more cows on their farm to try and keep up supply. The paddocks and environments they nurture are returning the good karma for the time being, as is their flock of 300 plus jersey cows.

But dry times aren’t the only worry, these Eurobodalla entrepreneurs are concerned at what they are seeing in the broader dairy industry.

“The price of milk now is less then it was at deregulation 12 years ago,” Nick says.

“At deregulation, the average farmer in the Bega Valley got 55 cents a litre now they are getting 52.

“On top of that, we’ve got grain prices double or triple what they were, electricity prices are double, higher wages, and farmers are earning less,” he says.

All this while the demand for dairy is higher than ever.

“Market forces are not at play, in any other industry like lamb, beef or wool. If there is a shortage the price goes up,” Nick explains.

“That’s the way it’s supposed to work. We’ve [Australia] gone from 13 billion litres of milk each year at deregulation, to less than eight billion litres last year. This year it will significantly lower again because of drought.

“And the industry is still on a very low price, every week in this valley there are farms closing.” 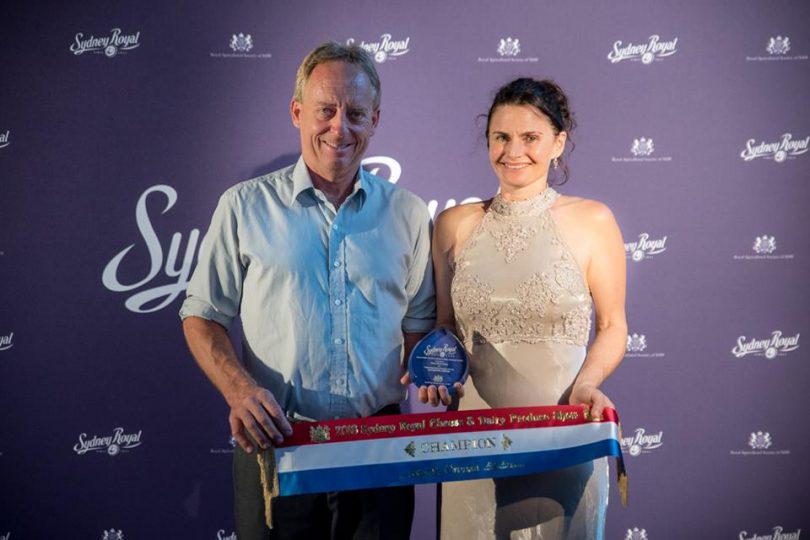 Going it alone the way they have has helped insulate the Dibdens in a way but it has also exposed them to significant personal financial risk.

“I understand that people say $5 for a bottle of our milk is a lot of money, but making milk comes at a price, and we are paying people.

“We are a handmade bespoke product.”

Nick believes the days of supermarket milk for $1 a litre are numbered, in part because the farms producing it simply can’t afford to go on and will close.

“Dollar milk is a disaster for the dairy industry ultimately and you get what you pay for, dollar milk has been stripped, but I fully understand people buying dollar milk,” he says.

“But if you want to buy our milk it will be at the correct price point, that’s the way we operate.”

Aside from milk, Tilba is famous for its cream, yoghurt, and cheeses.

“We have just trained up a new, young cheesemaker and he is doing a brilliant job, and we have been playing with our surface-ripened cheeses,” Erica says.

“[We’ve been producing] Brie, Camembert, and Mountain Ash and I am really looking forward to seeing how they go at the next Sydney Royal.

“We have also been experimenting with new yoghurt varieties like Tumeric – that was interesting, I like it, but we just want to consolidate before we go out to the market.”

Erica and Nick accept that tough times are part of being in business – part of life, but with the support of their customers, staff, and each other, along with a focus on unique, well-crafted products, they push ahead in these dry times.

Love your beautiful herd of jersey cows, and the delicious milk you produce... Thankyou.

Rick Robins - 34 minutes ago
Laurie Berry it's all ok, Canberra has a tram instead of basic services! View
Earthdog - 4 hours ago
Michael and Mark, depends if it was a Truffula tree because not everyone needs a thneed. Although it is very handy at Canberr... View
News 188

Terri Lee Gill - 54 minutes ago
Get over it you have had ample warnings and if you can’t control the pedal under your foot to abide by the law not only in... View
Richard Vlazlovski - 1 hour ago
Heading toward the social credit system just like in china . View
Chris Jones - 2 hours ago
Knowing our government they’d assess your home as part of your income to fine us more View
Food & Wine 2