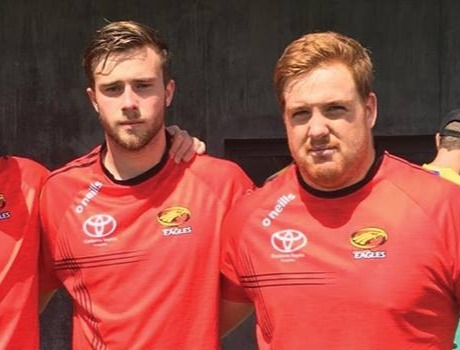 Mack Hansen and Tom Ross have known each other since they were 10-years-old. Photo: Gungahlin Eagles.

Tom Ross and Mack Hansen are an inseparable duo.

Ever since the boys played in a schoolboy rugby competition together as 10-year-olds, they have gone through the ranks of rugby union together from Daramalan College, Gungahlin Eagles, junior Wallaby set up, Brumbies pathway programs and have even been travel buddies together.

The pair will now make their Super Rugby debut together when they run onto the field for the Brumbies against arch-rivals NSW Waratahs tonight (15 March).

“If there is a definition of a fairytale debut, it is getting a win against rival club Waratahs alongside one of my best mates,” Ross shared.

“We have our own jobs to do for the team but if we get to connect during the game that will be a bonus.”

The Brumbies invited their parents to surprise the duo with a special jersey presentation at the team’s final training session, with a few tears shed amongst the close-knit Ross family.

“It was pretty special to have them there. It was a pretty emotional time and I didn’t know what to say when they walked in. I was a bit speechless,” Ross shared.

“They have done a lot for me over the years, driving me to and from footy training, and just the things that your mum and dad do for you.

“I certainly would not be in the position that I am today if it wasn’t for them so it was fitting that they presented my jersey. There were a couple of tears but they will kill me if I say who.”

The look on Hanson’s face when his mum and dad walked in said it all.

“My parents have been travelling around Australia for a bit and they told me they were coming back Friday afternoon,” Hanson shared. “They were playing silly buggers on me but it was awesome to have them there and give me my jersey.

“Tom’s dad cried but my dad is a little bit tougher than Tom’s,” he said with a laugh.

Ross was on the bus home from the runners again in Albury when he received a text from Dan McKellar saying that he would make his debut in the biggest game of the year for a Brumbies fan.

“I was sitting there, dozing off when I received a text from him saying that Allan hurt his wrist and that he would be out for a week or two and that it looks like that I was shaping up in the 23,” Ross said.

“I was so stoked and I couldn’t call my Dad quick enough to let him know.”

Hanson’s call-up came from a tap on the shoulder on Tuesday afternoon, with the message that McKellar wanted to see him in his office.

“I was crapping my pants just a little bit there but it ended up being good news,” he said. “It was like when the principal calls you in and you never know if you are in trouble or not.

“I went in really nervous but came out on top of the world. I am still pinching myself.” 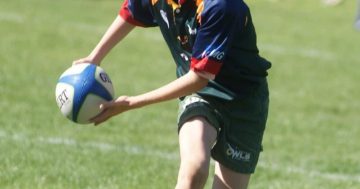