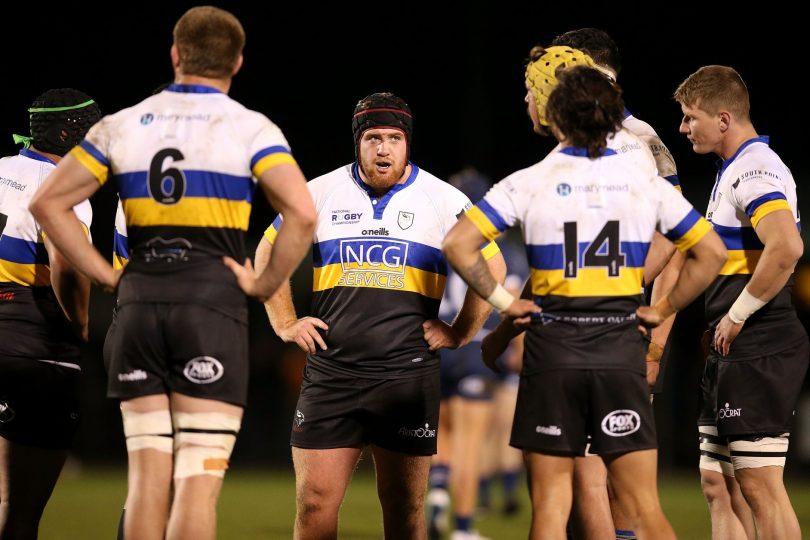 Tom Ross (centre) has come off the bench for all three games this season. Photo: Supplied by Canberra Vikings

Canberra Vikings coach Nick Scrivener hopes rising star Tom Ross will keep his head down and focus on the task at hand after he was named in the Vikings starting XV for this weekend’s clash.

The Gungahlin Eagles prop has been selected for his first start for the Canberra Vikings against the NSW Country Eagles this Sunday (23 September) in what has been an incredible year for the 20-year-old.

In 2018, the prop represented his country at the World Rugby U20 Championships in France, signed a wider training squad contract with the Brumbies and claimed the award for ACT’s U20 Player of the Year.

Last year, Ross was stuck on his couch recovering from a serious knee reconstruction, doubting whether he would be able to play at the same level ever again. 12 months on and the Junior Wallaby has a chance to stake his claim for the Viking’s starting spot with Leuluaialii-Makin out for some weeks with a calf tear.

The 20-year-old has come off the bench for the past three matches and his influence off the bench in the Vikings win over the Western Force was vital.

“I thought Tom’s involvement for us last week was great. When he came on, we got a scrum penalty straight away,” Scrivener said.

“He is a good young player and this weekend is going to be really good for him. It is a really big step when he goes up against Paddy Ryan and other experienced players from the start. As a young guy, starting at tighthead prop is a big responsibility in every team, but I suppose that is why he has been identified by the Brumbies as a guy with big potential.”

Scrivener urged his young charge not to be distracted by the talk of his vast potential and encouraged Ross to use his time in the NRC as a stepping stone to greater things.

“When he gets these responsibilities in big games against good opposition, it is going to help him. He has got some good guys around him and I am really looking forward to ripping in on Sunday,” he said.

“He has potential. Guys that are good when they are young go on to have a long career and good young props are well-sought after. The opportunities are there for him and starting this weekend is an opportunity for him. Whatever happens in the future is going to stem from these opportunities and experiences.

“He shouldn’t be looking too far ahead. This is the next step.”

Ross is one of several changes to the Vikings squad, which has won the past two games in a row in the short seven-week season.

The Vikings will be missing some of their international contingent for their trip to Armidale, with Tom Banks and Folau Fainga’a being named in the Wallabies squad for the South African and Argentinian legs of the Rugby Championship.

Canberra does get the benefit of Joe Powell’s omission from the Aussie touring group, with Michael Cheika electing to give Powell valuable game time with the Vikings, as the young halfback continues his development.

Irae Simone gets his first chance to start at outside-centre, Ross’ junior Wallabies teammate Mack Hansen will start at fullback and Rob Valetini will move to the No. 6 jersey.

Canberra currently sits third on the table and will look to keep their momentum going as the season nears the halfway mark.

Bill Gemmell - 7 minutes ago
That traffic in Lyons is about to get a whole lot busier with all the construction about to start View
Michael Roy - 3 hours ago
We need to create some LTNs View
HiddenDragon - 3 hours ago
"... and start frontloading infrastructure instead of just thinking about it and retrofitting when demand is overwhelming." W... View
Opinion 200

Paul Funnell - 51 minutes ago
I have no problem with people doing the speed limit my hate is people doing 10-15 kph under the speed limit for no reason peo... View
Lyn Mellier - 54 minutes ago
I've been tooted when indicating, slowing down to turn into my own driveway. Rude impatient drivers on Canberra roads. View
Mitch Carrington - 1 hour ago
If you're being tailgated you're probably one of the peanuts sitting in the right hand lane doing 20 below the limit View
Lifestyle 1

mattwatts - 1 hour ago
The fact Transit is included demonstrates this is yet another botched scheme. Venues that are still operating have missed out... View
News 7

Paul South - 1 hour ago
A broom through the whole works would be nice . The whole system is unnecessary complicated. The culture of the whole school... View
Stephen Matthews - 4 hours ago
Paul Leins You can spot ghe sky viewers here View
Breaking 21

whatwik - 2 hours ago
And speaking of Canberrans being advised to reduce their exposure while out and about ... With yesterday's ACT Govt OUR CBR b... View
whatwik - 3 hours ago
That's pretty horrible - not only did I miss out in the lottery but all I have is a scar from a rushed vaccination when about... View
chewy14 - 4 hours ago
Acton, The opposite is true. The more we read and hear, the more it shows that the risks around AZ are tiny and that the real... View
Property 24

Vicki Schramm - 2 hours ago
Marty Hoenig , actually the drinking water here is amazing. Although it did take a while to get it right. View
Breaking 1

Ol L - 4 hours ago
The lodge I work at has had no cancellations even though just about every guest staying is arriving from Sydney. Amazing how... View
Food & Wine 10

Brindie - 6 hours ago
The decision to go into voluntary administration is disappointing for NHC clients and their patients. However, the delay in e... View
Breaking 1

Dom Polegubic - 8 hours ago
This is a good link to an intro to Croatian wines: https://winefolly.com/deep-dive/introduction-to-croatian-wines/... View
show more show less
*Results are based on activity within last 7 days

@The_RiotACT @The_RiotACT
It's the sound of Australia. A new exhibition at the @nma explores the power and meaning of the didgeridoo https://t.co/NM2faFcfla (1 hour ago)

@The_RiotACT @The_RiotACT
Want a new best bud? Our @rspcaact #PetsoftheWeek Buddy the dog and guinea pig Porky are looking for their perfect matches https://t.co/vtlWP23MJc (2 hours ago)

@The_RiotACT @The_RiotACT
This owner-built #McKellar family home comes with all the indulgent extras that elevate everyday living https://t.co/fXeV7HnGCL (3 hours ago)