Tommy Balogh’s Stretch Marks of the Universe at Nishi Gallery 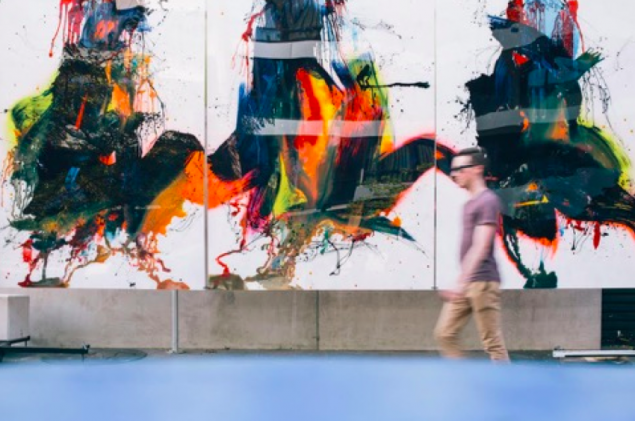 Stretch Marks of the Universe is an ambitious exhibition of contemporary abstract paintings by Canberra based artist Tommy Balogh.

The show includes his 6x3m triptych painting The Three Disciples, which was both created and featured at Art, Not Apart 2015. Nishi Gallery will also house a new, large diptych painting entitled Vista, a sequel to Pillars of Creation and other new works.

Tommy has shown previously at M16 Artspace in Alchemists’ Paradise and was invited last year to show his large painting Pillars of Creation at Nishi Gallery for the group show, HUE.

“The show represents a turning point in my career. I am now immersing the viewer. Stretch Marks of the Universe celebrates the colourful patterns of existence through the mechanics of painting. I submit the viewer to natural forces and the melted macro of the universe,” he says.

“In this show, I try to push the bounds of my art further, by not only moving into larger scale work, but by also delving into edgy compositions that challenge our preconceptions of form and formlessness.”

Donna Arthur - 13 minutes ago
Found some walking around the elmslea ponds. View
Vicky Cook - 25 minutes ago
Thanks to the people doing this as I'm sure it brings a smile to the faces of those who are finding them. View
Christine Barber - 38 minutes ago
Jerrabomberra View
Lifestyle 3

Lisa Greig - 18 minutes ago
Matt Groeneveld I’d hate to have to count them all! View
News 8

Alexei Gorbatov - 39 minutes ago
Why we don’t hear that money go to strengthen our hospitals? View
Susanne Levy - 10 hours ago
Hugh Munro our medical treatments and medications are none of anyones business. It is not mandatory . View
Nathan Burraston - 10 hours ago
Hugh Munro yes I had the Astra Zeneca. That's why I want to get on with it. People who have had 18 months of scaremongering s... View
Motoring 1

Ed N Joanne Towner - 54 minutes ago
Had one of these and it was an excellent vehicle and great to drive. View
Food & Wine 12

@The_RiotACT @The_RiotACT
Construction sites and supermarkets in almost a dozen suburbs, as well as a number of public transport routes, have been listed as exposure locations by ACT Health overnight https://t.co/rSgPZcoRvr (35 minutes ago)