Toulouse-Latrec at the National Gallery, a review 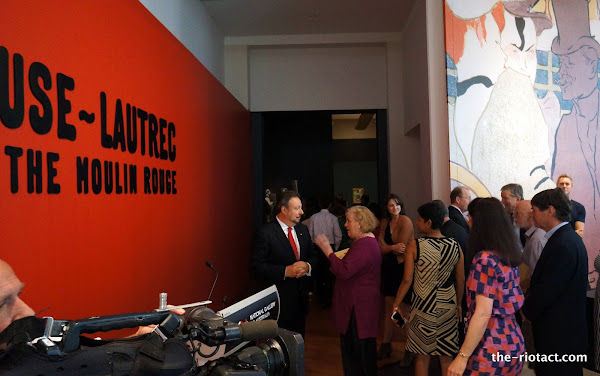 The National Gallery’s big Centenary blockbuster “Toulouse-Lautrec, Paris & The Moulin Rouge“ opens to the public tomorrow, there’s a launch party for the shiny people tonight and this morning there was a media preview which I toddled along to.

If you already know about Toulouse-Lautrec then there’s not much more I need to say about it really. You’ll love this exhibition as an exploration of the strange little man’s life.

If you’ve ever had one of his posters on the wall you’ll appreciate this retrospective of the many aspects of Latrec’s artistic output.

Now if you haven’t heard of the man I’m going to assume you too are a man and the following scenario has occurred in your life. It’s pretty much universal.

At some point in your early 20s you’ve met a young woman in a bar and gone back to her place.

Between 2am and 4am you’ve been staring at a poster on her bedroom wall while, with increasing irritation, the some facts have become clear to you:

While this disappointment unfolded chances are the poster you were looking at was by Toulouse-Latrec.

But don’t hold that against him.

Some of the portraits well worth a look, he had a real way with women’s eyes. Pay attention to the furnished material and you’ll have some pleasant conversation pieces ready to go when you leave the exhibition.

As usual the gallery goes light on the history of the works. The remodelling of Paris in the latter 19th century is alluded to but the Franco-Prussian War which had a bit to do with that is not mentioned.

All in all it’s a pleasant and informative way to spend an hour.

One Response to Toulouse-Latrec at the National Gallery, a review
Filter
Showing only Website comments

Apparently he died of syphilis and alcoholism at the young age of thirty six – although I don’t suppose hanging around into your seventies in that state has much to recommend it.

Marea Fatseas - 8 minutes ago
David Riddell the waste normally going to landfill in Mugga Lane wouldn’t be enough to meet the proposed CRS target of 300,... View
Capital Retro - 14 hours ago
Double handling makes no commercial sense but the ACT government is worried about that. It is more likely that the waste we a... View
Maya123 - 15 hours ago
I have been in Canberra since way before 2008; 1974 in my case, and I always heard Fyshwick referred to as light industrial b... View
News 45

@The_RiotACT @The_RiotACT
The owner of two distinctive office buildings in City West plans a $4.7 million revitalisation for the precinct, with the centrepiece being a new pedestrian plaza connecting them https://t.co/wJkzDPrrJl (59 minutes ago)