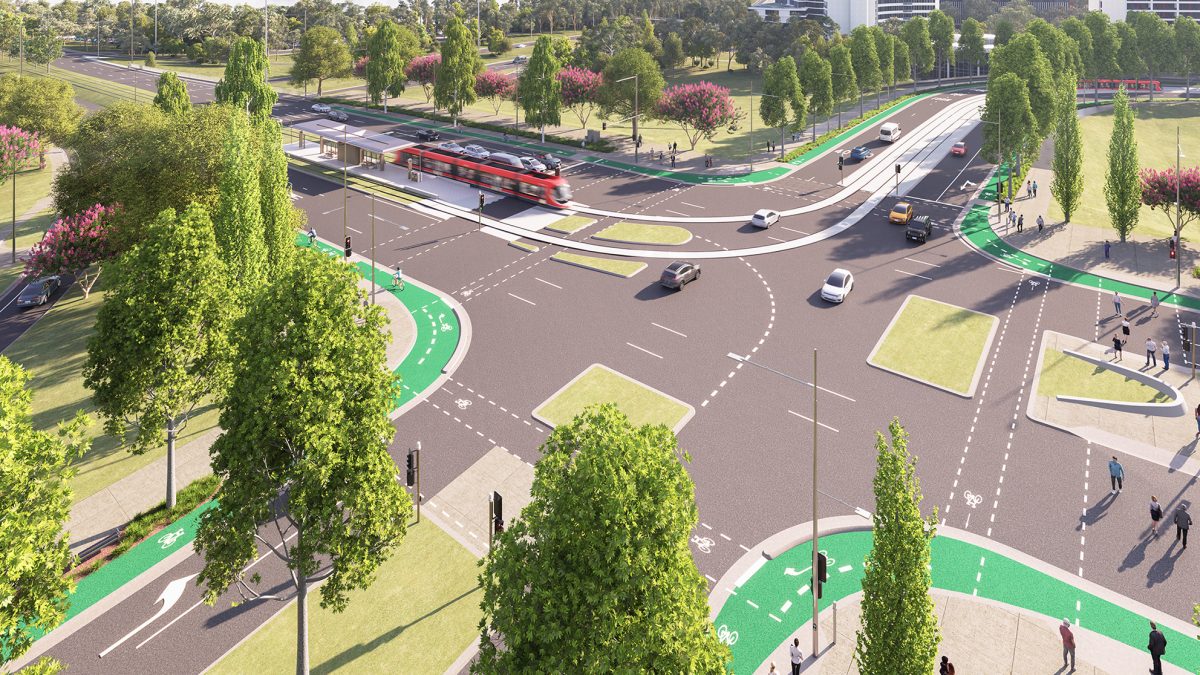 An artist’s impression of what the intersection of London Circuit and Commonwealth Avenue will look like, complete with light rail. Photo: ACT Government.

The flagged disruptions for Canberra road users at the southern end of the city will soon become a reality, with main works set to start on raising London Circuit, a key step in the extension of light rail first to Commonwealth Park and then on to Woden.

The ACT Government has announced the closure from 2 December of London Circuit between Edinburgh Avenue and Constitution Avenue, including the permanent closure of the two western cloverleaf ramps leading into the city.

It will be the most significant change to the road network in central Canberra since the 1960s.

Canberrans will need to follow a number of diversions to get to City West, City East and Parkes Way.

The Government is also urging them to “rethink their routine” including adjusting travel times to avoid the morning and afternoon peaks and taking the bus to help ease the traffic pain during what is expected to be a two-year construction period.

The closure of London Circuit will also coincide with reasealing works on Parkes Way on 2, 3 and 5 December, making life even more difficult for commuters from the south.

“These closures are a significant change to our road network. Canberrans are encouraged to reconsider how and when they travel in and around the city,” said Transport Minister Chris Steel.

“Traffic mitigation measures will ensure Canberrans and visitors can still access the city, visit their favourite shops and cafes or receive the local services they need. We just ask everyone to plan their trip and be patient while changes take place.”

New traffic lights and a bus lane on Vernon Circle will manage traffic flow during construction, with buses to use Vernon Circle to access the city interchange from Friday 2 December.

Work is also continuing to extend the footpath near City Hill to make it safer for pedestrians.

Detours will be in place to maintain access to Constitution Avenue, City East and West and Parkes Way eastbound from Commonwealth Avenue during the works.

The Government says that as well as being a requisite for extending light rail eventually to Woden, raising London Circuit to connect with Commonwealth Avenue will also create a safer environment for cyclists and pedestrians and revitalise the southern part of Canberra’s CBD, including the Canberra Theatre Precinct and connections to the Acton Waterfront.

The project will create a level intersection with Commonwealth Avenue to enable light rail’s right-hand turn from London Circuit towards the lake.

I am sick of hearing about the stupid expensive, archaic, inefficient Tram. No amount of trying to talk it up is going to think It’s a good idea. The green labour government is not listening to us and has not been listening to us for about the last five years. The only way we’re going to get rid of them is not vote for either of them in the next election anyone and I mean anyone would do a job than this groups town planning and budgeting management skills. Please write at give us interesting news on other topics, please!

By the time this is finished any casual visitor to the CBD will have found alternative venues to shop and eat, and city workers will be agitating for more work-from-home hours, so there will be fewer and fewer people making that journey. The whole thing will be redundant. Great planning ACT Government!

Or we could just buy some electric buses and continue to let the developers do what they want, where they want, for a whole lot less money, inconvenience and a whole lot more efficiency and effectiveness.

we don’t need any Light rail in Canberra; we need more roads for Battery operated Bus Lines, what they have in other European City’s; like in Geneva https://spectrum.ieee.org/swiss-ebuses-charge-as-fast-as-lightning

Apparently Geneva has both. It isn’t an either/or situation. https://en.wikipedia.org/wiki/Trams_in_Geneva

People will catch a tram that won’t catch a bus. And a tram uses vastly more people for the same cost of a single driver’s wage without choking up the roads. Use the electric buses for the less intense routes.

People may catch a tram when there are no choices between trams and buses. Trams have replaced buses in case you haven’t noticed.

Agree, people who won’t catch buses, are more willing to catch a tram.

What’s the impact on public transport users? Or don’t they matter?

Not the first time London Circuit has been closed.. wont be the last… shrug that is life

And closing a few streets for the V8 each year was considered to be a burden. That was nothing compared to this. I guess the Minister for Toy Trains, Private Agendas and Rainbows is going to get what he wants.

There’s going to be at least two years of upheaval around London Circuit. If you want to learn how to replace a car trip with one by bike, and want to test ride one of our e-bikes, please DM us.
Our slow rides are here https://bit.ly/CanberraBike

Minister Steele, How about resealing Parkes Way before closing off the other roads?

Let me know if you need any other ideas.

God what a balls up it will be. It will be a positive dogs breakfast.