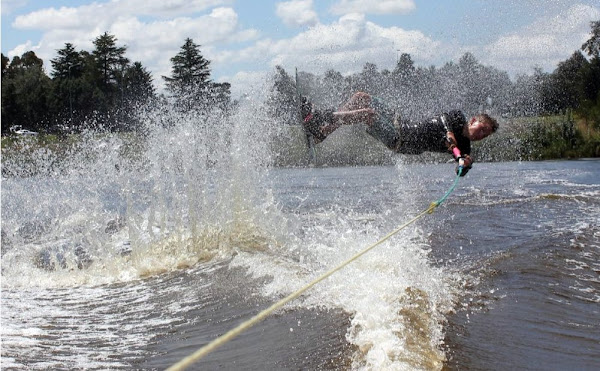 The Australia New Zealand Water Ski Challenge are putting the word out there:

Canberra will host its first international water skiing event this weekend (8-10 February) when Australia lines up against New Zealand on the Molonglo River.

Four Canberrans have been selected to represent Australia, with Bianca Mullach and Archie Davis included in the under 17 team and Charlie and Mack Davis competing for the under 14 team.

Secretary of Water Ski ACT Paul Davis said the competition would be of the highest calibre.

That also struck me as odd, especially given the exemption/permission given to the ski club to use Lake Ginninderra for practice due to the poor water quality at Molonglo Reach. (Ski boats on Lake G is great idea IMO.)

So the river has been closed for 3 (pretty sure this is the 3rd) summers now due to low water levels, but it’s ok to be used for a competition.

Deepak Ramanath - 8 minutes ago
James Forge Wow, where is this? View
James Forge - 9 minutes ago
Deepak Ramanath the government is about to demolish an overpass and replace it with yet another set of traffic lights View
Kylie Wylie - 37 minutes ago
Residents of Lyons suffer badly every work day. Every main road is gridlocked with rat runners that mostly won't even let oth... View
Opinion 189

Alex Dee - 12 minutes ago
You need to get out more. View
Francesco Merlino - 19 minutes ago
Alex Dee Alex Dee I hope you are right! View
circe64 - 2 hours ago
There is a road going into Gungahlin where 90% of drivers clearly show they don't read road signs. They drive 60 in a clearly... View
Lifestyle 2

inverted63 - 18 minutes ago
Oh dear. ...Makes accusations about made up statistics & then cites a total of 3 successful female artists across a whole ind... View
Breaking 1

Shay Daisy - 29 minutes ago
So sad. Please everyone be careful out there. Be patient, observant and kind so we can all be safe. View
Breaking 11

Ol L - 42 minutes ago
Good friend passed out the evening after after the AstraZeneca shot, hit her head and had 10 stitches. Not a blood clot so no... View
nothappyjan - 3 hours ago
Had pretty much the exact same side effects as you, suppose it shows it is actually doing something for my immune system. Wil... View
John Moulis - 4 hours ago
It's broken mate. In 2011 I received a swine flu injection from my GP without any problems at all. I simply phoned up, made a... View
News 25

@The_RiotACT @The_RiotACT
Canberra's surging house prices mean couples are taking longer to save for a deposit, and are being forced to lower their aspirations, according to a new report https://t.co/DmpeMwLcDP (28 minutes ago)