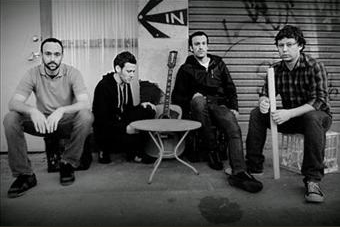 Lovers of local music will be proud as punch to know that Canberra’s own Hoodlum Shouts are Triple J’s Unearthed Feature Artist all this week!

For those who need to catch up a little, the four piece has been generating quite a buzz surrounding their live shows in the eighteen months since they formed, and has just released their debut EP Horses and Human Hands.

Long-standing supporters of live music in Canberra may recognise Luke and Mike from ex-Mightyfew fame, and vocalist Sam from punk favourites Epic Flagon.

With these combined influences the current sound is difficult to categorize, but has been described as ‘Midnight Oil on Valium’.

The guys have a series of shows lined up throughout August and September at The Phoenix, The Pot Belly and The Front, so get out there and know your product.

For full details of the shows, or to check out a few tunes, head to the Hoodlum Shouts Myspace.Or, to follow the lad’s progress in the lofty heights of radio-land head to their Unearthed page.

And if you can’t be arsed with links and sites you can pick up a copy of the EP from Landspeed Records in the City or The Front at Lyneham, or sit with your ear glued to the side of the wireless for the remainder of the week.

geez, I work with Sam, and had no idea. good luck to them.

What did that Kingsmill prick do to them?

way to stick it to that Kingsmill prck.

Darcy Ryan - 5 hours ago
Meanwhile business owners and landlords are looking to abandon Canberra due to scandalous high rates and land taxes. Cmon lab... View
Eddie Majcic - 8 hours ago
Harm and abuse against someone's will, whether it be physical or emotional or something else is well covered in current legis... View
Russell Nankervis - 8 hours ago
I have seen no evidence of that from safe schools. View
Sport 9